Full Moon in the Middle of a Day

Hilo is a sleepy town but thrilling to wake up to early and explore.  After a cold brewed ice coffee from Bears which I’ve caffeinated at for over 35 years and a loco moco (two scoops of brown rice, onions, gravy, burger patty and an egg on top) which gave me the energy to move at a fast clip, I tackled the Liliukalani Park along the rim of the bay. 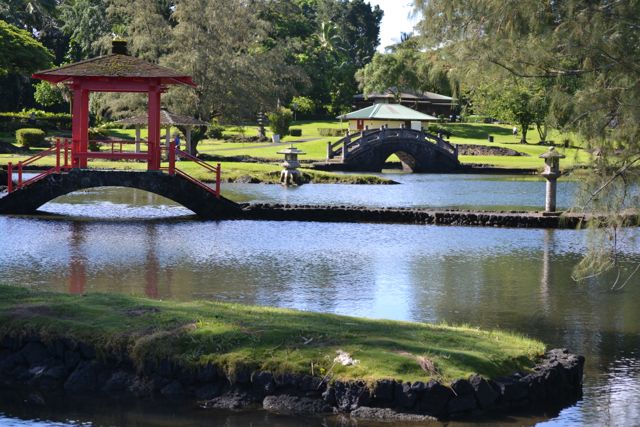 With banyan trees dripping their branches like willows, with roots like mangroves, lush green lawns that roll over lava rock pavers and walls, it’s a mesmerising sight in the morning with the smells of fresh flowers, raw earth and the sea breeze coming in with its stew of smells.  A little more pungent than usual since there is a Brownwater alert due to the runoff from cesspools and other inputs because of the hurricane’s aftermath.  Only a couple of dozen miles from here, the village of Pahoa and Puna region are digging themselves out from the devastation but here in Hilo, you couldn’t tell that it had been whipped twice in a week. 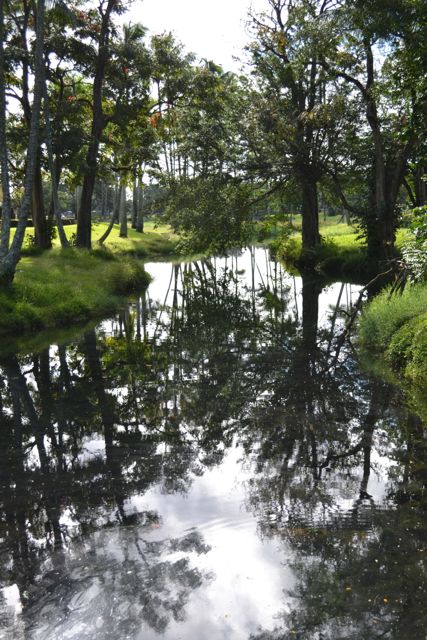 After touring the town’s frontage and getting a locally made hat to protect the solar sex panel, it was time to consider lunch.  I’d gotten a slew of recommendations ranging from rough to regal but the one on everyone’s lips was the Full Moon Cafe on Kalakaua Street which had opened last October when a brothers Mark and Tedd Pomanski decided to uproot from their chef positions at top restaurants like Roy’s Nobu and Fifty Seven and come back home.  It’s on a side street from the main drag, practically invisible and unassuming looking from the street. 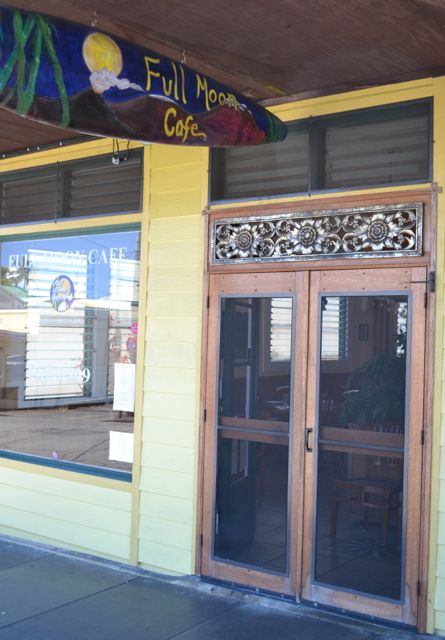 But it’s light and airy indoors, inviting and homey with magnificent odours wafting around.  I’d arrived early, about 11 am,so that I could check it out and take pictures when it’s empty and glad I did. 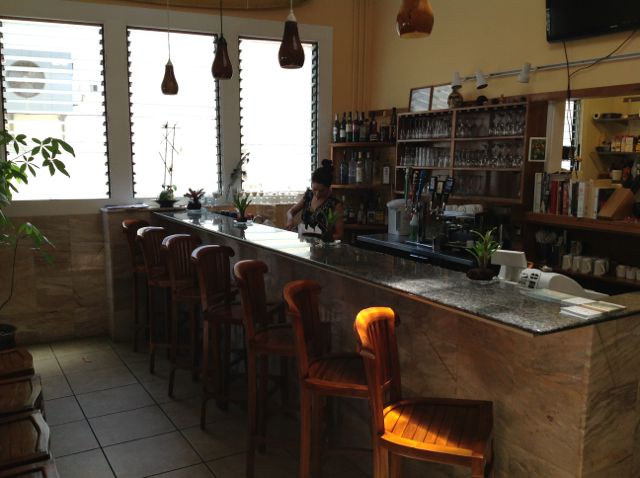 I was met by Mark’s wife Soni who runs front of house and is also the bartender.  She is as sunny as her name sounds and I soon found myself at the bar chatting with her with a brown rum cocktail using molasses as a base between us.  The bar had an eerie shaft of light coming down to one chair which I decided not to occupy in case it was a case of spirits being placed there. 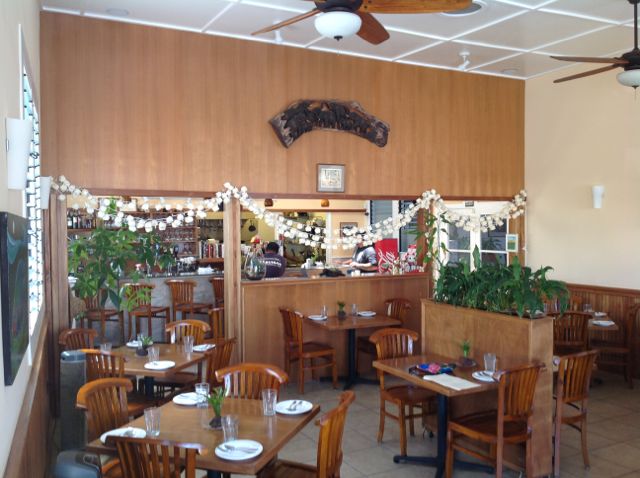 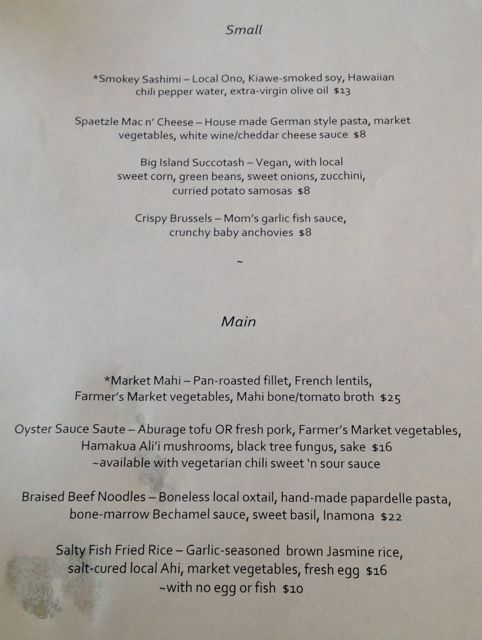 There were only four each of minis and mains but they knew what they were doing as I had a tremendous problem making up my mind.  In the end it came down to the Smokey Sashimi to start which the fish was not smoked but the soy sauce over mesquite or kiawe wood, evaporating it a bit to smoky goodness.  It was beyond description in its simplicity but with all the flavours coming through, even the shredded daikon, with just the right zing of pepper water. 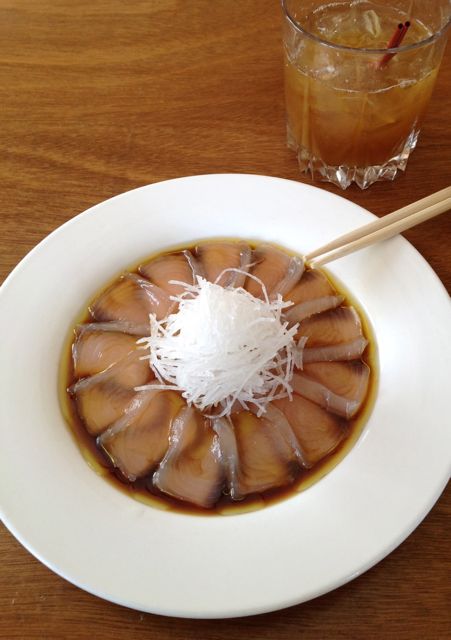 Next up was the oxtail braise in a marrow sauce and inamona over local pappardele noodles.  Rich, flavourful, slippery delicate yet the sauce embraced the noodles as it overtook me.   I struggled to finish it and was almost there.  By this time the restaurant was filling up and I got to see the other dishes that i had passed on and wished I had maybe ordered three smalls instead of a mini and maxi. 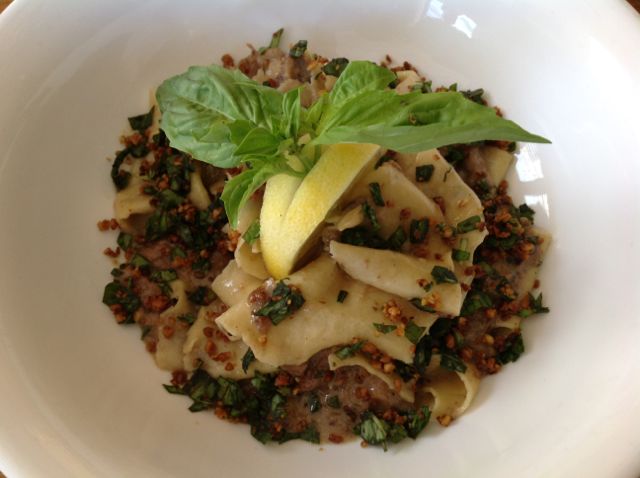 Just at that point Tedd gifted me with a small bowl of his Mama’s crispy brussel sprouts and waxed lyrical about the vegetable and its preparation with a garlic fish sauce and topped with tiny baby anchovies that looked like crunchy noodlettes.  They made the dish and it was exquisite in its simplicity. 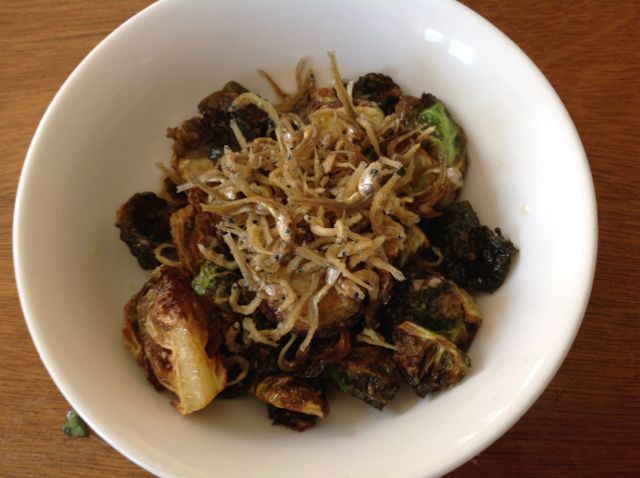 I couldn’t have been happier with my choice of lunch spot and loved the staff.  They’re meticulous in their use of fresh local ingredients with brother Tedd scouring the farmers market early am and brother Mark picking the meat and fish later.   The menu changes constantly due to what’s new and what they are enthused about.   They took over the space on a Friday and opened up Monday, deciding to keep the name of the previous restaurant to start with a momentum but the transition has come around to near completion with the new name, Moon and Turtle.  It is due to their philosophy of combining the very high elevated cooking styles and the simple produce at its freshest and best in one place. 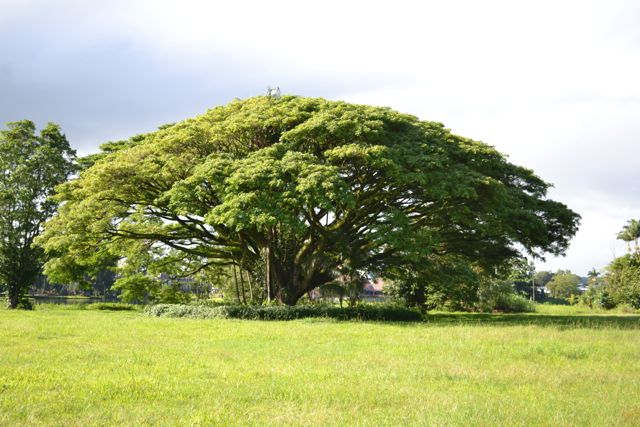