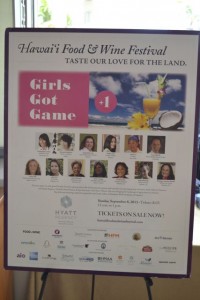 With a fascination for women’s volleyball and basketball and a team named the Rainbow Wahines, you’d think this Saturday event was going to be held in a dark, smoky sports bar.

But no,  it was on the bright rooftop restaurant SHOR topping the mezzanine of the Hyatt Regency Hotel perched above Waikiki Beach.

I love the Hyatt, it was the first Hawaiian hotel I stayed at when I came here in 1975 to work on the Kool Pacific Jazz Festival.  So there was a bit of deja vu coming up the motor court. 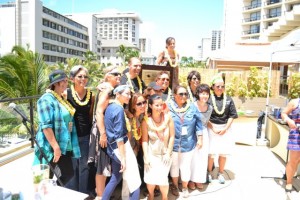 ‘Girls Got Game +1’ follows last year’s similar event and  celebrates the dozen women chefs chosen to work with their counterpart female produce growers and farmers to produce two dishes each. 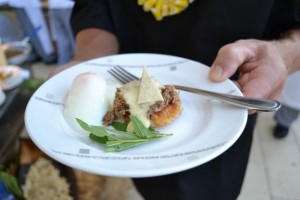 The +1 was the Hyatt’s own Sven Ulrich, a likeable bloke who made the best dish to me, a soft poached baby Ka Lei egg with a lamb hash, lemon verbena hollandaise and a caraway crisp. 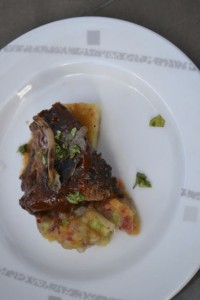 Not that the girls were slacking of, there were some amazing dishes and by the queues for some and the excited crowds babbling in Japanese, there were some Wonder Women of the pans and flames here. 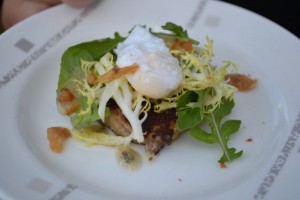 For local talent, I couldn’t go past Jacqueline Lau from Roy’s restaurant who once again scored high with a mean beef brisket brekky plate.She was my first plate this morning… mmm/// brisket.  She started with superstar chef Roy Yamaguchi in 1988 when he opened the first of a worldwide chain of Hawaiian Fusion cooking and was his first chef de cuisine. 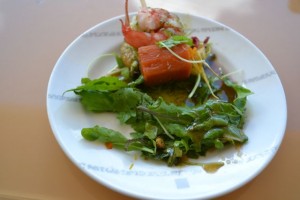 Aside from the spice-rubbed smoked Kulana brisket with sweet corn sopes, Paniolo BBQ sauce and avocado salsa, she also whipped up Spam and Egg with Shinato pork scrapple, crispy earand guanciale salad with a poached quail egg quivering on the side. 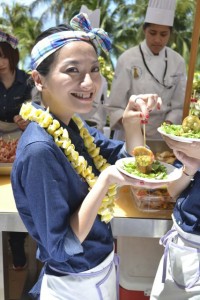 Amber Lin from Taipei is a firecracker of energy and presence, emerging as the most photogenic of the women by her pixie like posing and burning eyes of passion for her dish.  Her restaurant is called Foodie Amber in Taiwan though her English skills and sense of playfulness are astonishing.She made a golden crispy shrimp wonton with Chinese styler stew vegetables and sweet and sour herb salad.  Her dish hit all the buttons. 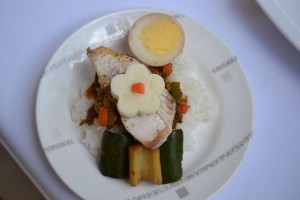 Right next to her was a Japanese rock star chef judging by the adoring crowds who applauded her every move.  That’s because Harumi Kurihara has written 117 books in 23 years with sales of 23 million.  She’s also the Martha stewart of Japan with 54 stores as well as managing a dozen restaurants and cafes.  She didn’t even break a sweat here but her dishes were magnificent. 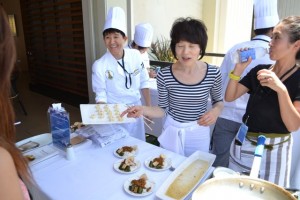 Harumi’s curry lunch had a base of rice, a curry bolognaise style sauce, pickled vegetables with a chili hit, fried hamachi fish and a smoky duck egg with a potato flower topping.  Such an astounding blending of flavors that kept their individual elements and kept replaying the song.

Harumi’s curry lunch had a base of rice, a curry bolognaise style sauce, pickled vegetables with a chili hit, fried hamachi fish and a smoky duck egg with a potato flower topping.  Such an astounding blending of flavors that kept their individual elements and kept replaying the song. 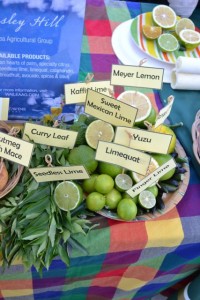 But it wasn’t all chef stands, queues for food and cocktails (no wine or beer was served).  There were stalls by the producers which included a citrus czar from whom I learned a lot about lemons, limes and other squirty fruits. 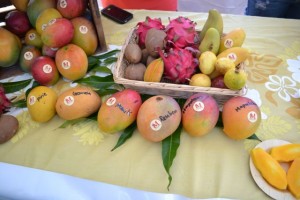 A woman whose life pursuit is mangoes and grows a few dozen varieties chatted with a neighbour about the last of one type coming out, but ooo, ooo, try this new hybrid on a toothpick. 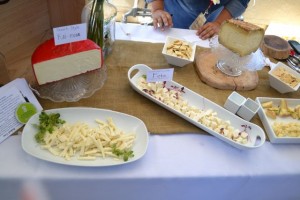 One of my faves from the first Food and Wine Fest, Naked Cow Dairy, was there with a selection of their excellent cheeses including feta, washed rind cheddar, havarti and a pepper cheese.  It was only two hours of distaff culinary magic but worth every morsel,


Now it’s time to head to the Ihilani Resprt and Spa for tonight’s Savoury ever After closing event on the beach. 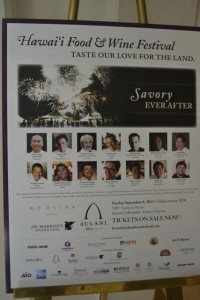