In The Belly of The Buddha 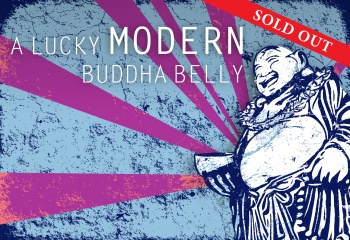 With an upstairs faux mini-beach and fountain, leading down to the pool surrounded by stands of chefs billowing steam and the occasional bursts of flames, with bars in every corner and wine booths scattered around, it’s an idyllic setting for the first night of Oahu’s Hawaiian Food and Wine Festival. 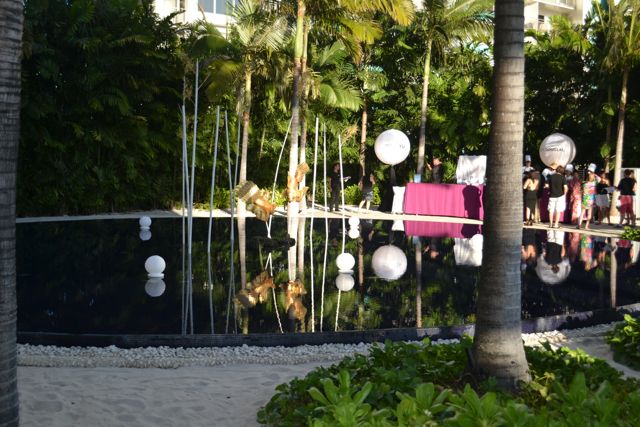 The Modern Hotel which houses Morimoto’s home restaurant is the epitome of cool with Ian Schrager-era architecture and colours, impeccable design and perfect staff.   And in its fourth year as the first event, this party rocks on from 5pm to late into the night as the sun sets over the marina and palms sway among the beautiful people. 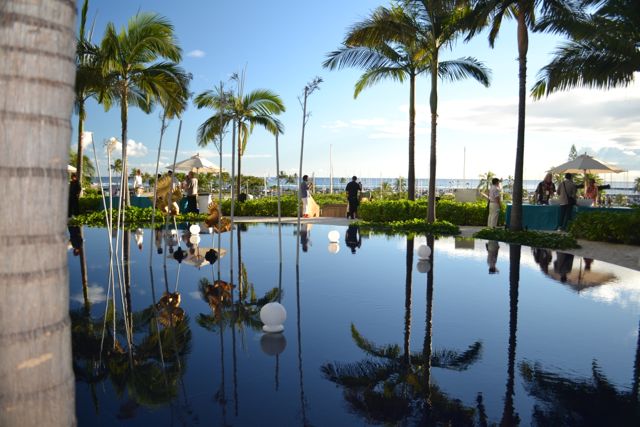 Masaharu Morimoto is best known as the Iron Chef on the Japanese cooking show and its American spinoff.  He’s a sushi master and opened his first restaurant in Hiroshima.  Waikiki is his home base but he has other places in India, New York, Napa and more. 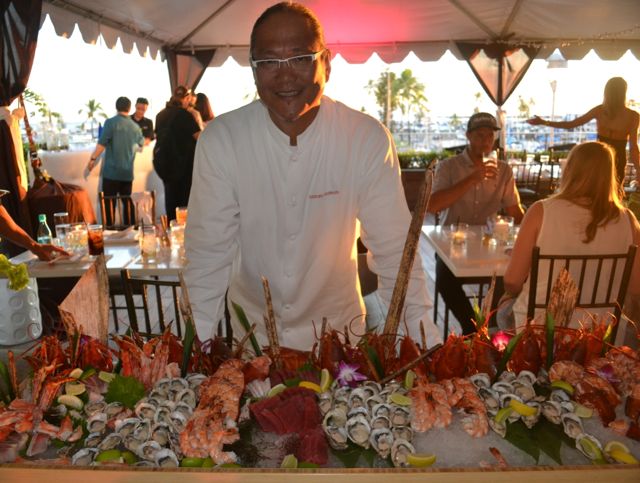 The event has been held right outside his restaurant and he bounces from table to table as well as overseeing his outdoor stand.  Always resplendent in spotless and bone white chef gear and shorts, he is constantly being photographed by his legions of admirers and there always seems to be another TV crew waiting just around the corner.  A lovable chap, he’s also a notorious ladies man.

What better place to serve as the HQ for this plush event which had a wealth of chic sirens in short skirts and tight clothes prancing around on heels with the requisite battalion of bachelors and men of a certain age clinging to them so as not to lose them.  We were all issued with a bamboo fork and wine glass to sample the grazing trail. 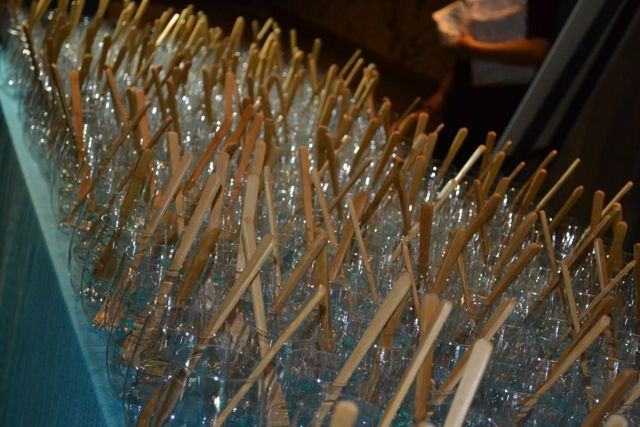 Starting from the top, the first offering could have gagged a horse!  The King’s Hawaiian Bread folk stuffed a mini Sub Roll with Beer Braised Beef Short Rib slathered with a maui onion mustard and piled high with pineapple slaw.  Delicious, leaking juice and dropping contents, maybe a little too generous. 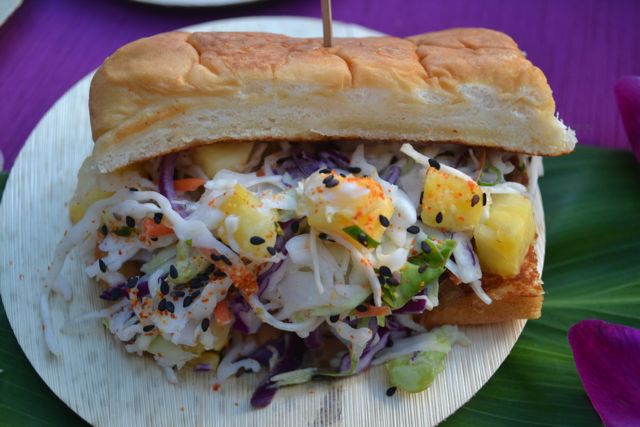 At this point I noticed that many of the signs of chefs did not have ingredients or explanations of what the dishes were.  Unlike Ka’anapali Fresh which had the luxury of a smaller number of mostly local chefs, so as to be able to list gluten-free, no-nuts or other allergy warnings, many of the imports did not file their ingredient lists in time for the stand cards which were also mostly illegible due to a lack of contrast of white letters on a light blue background 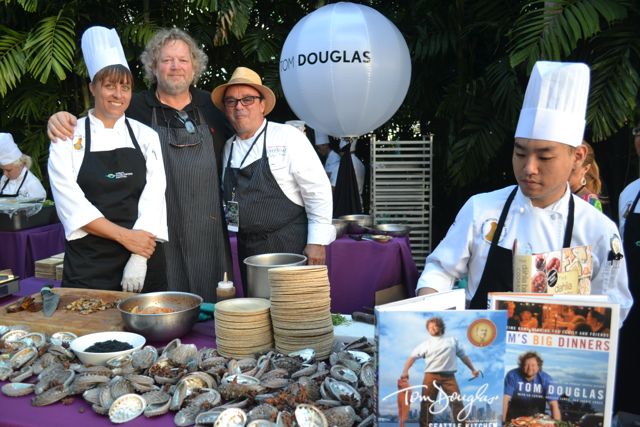 Next stand over was Seattle chef Tom Douglas, looking more like a seaman in boots and shorts with white legs and a long black apron.   His exquisite serve was Kona Abalone simply prepared in a light sauce but tender and with depth. 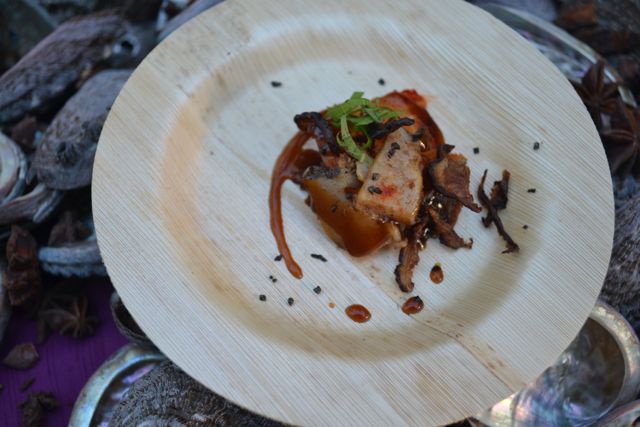 Peng Yu from Qing Lun Lou in Beijing offered an exquisite Royal Feast Sweet & Sour Pork which was crisp and spicy but no ingredients listed and his English was not adequate to describe what made the dish up.  It was however smashing. 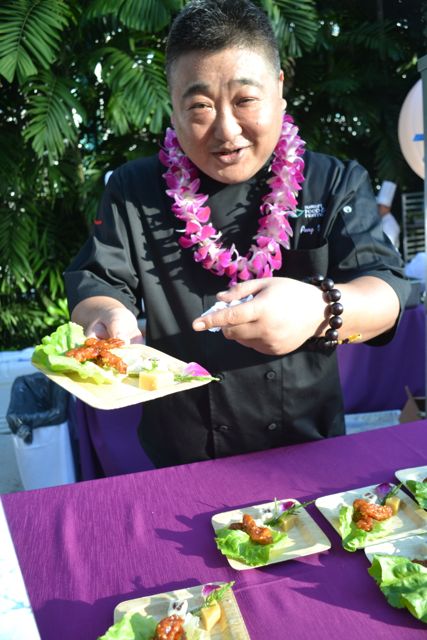 On the curve coming around from these three upstairs stands was my Pinot Noir Hero, Jim Clendenen of Au Bon Climat based out of Santa Barbara.  It’s always great to see him in one of his loud Hawaiian shorts with open bottles of his best cool pinots open for tasting. 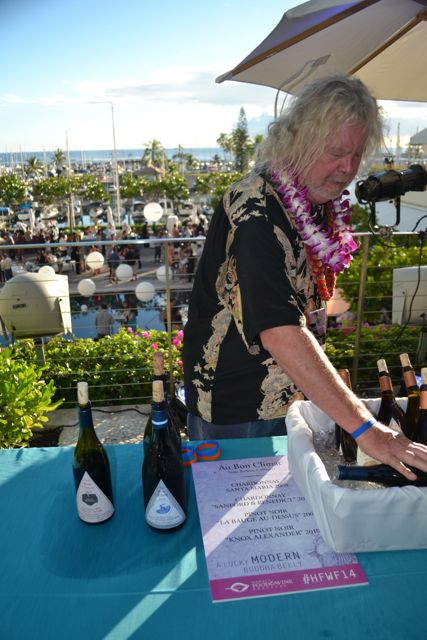 He was matched with Gunderloch Wines on the side, one of three German wineries featured this night for their whites as well as Chaper 24 from Oregon, Behrens and Relic from California and more. 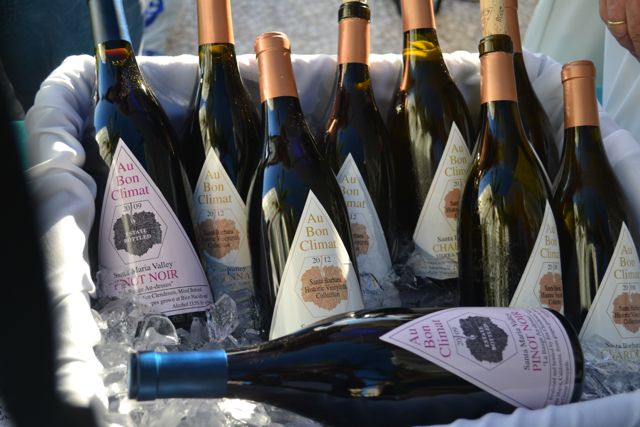 On the mixologists wing, Sean Kenyon of Williams and Kenyon Bar in Denver was teamed with Ivy Mix of Clover Club in New York turning out two special light cocktails. 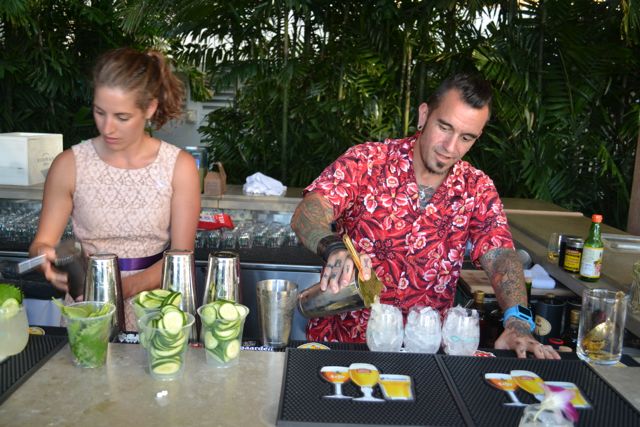 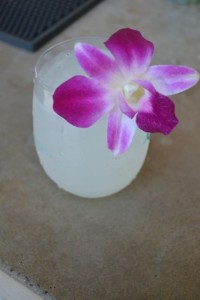 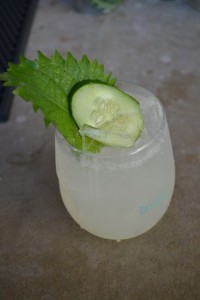 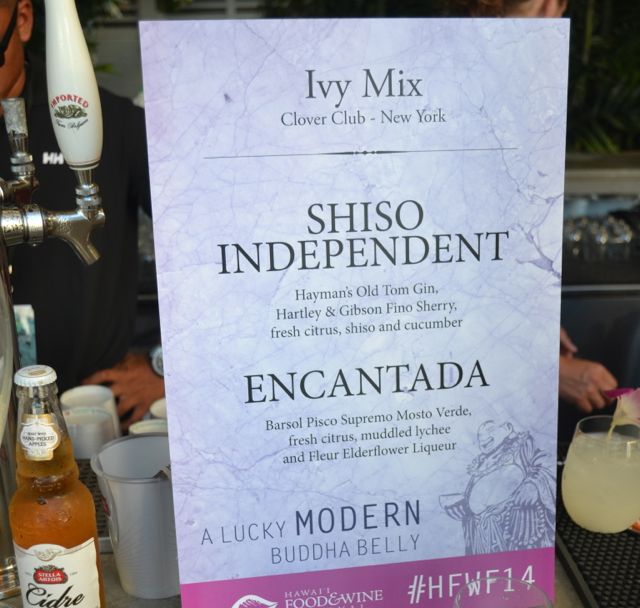 I was surprised to see one of my favourite chefs from Australia here, Philip Johnson of Ecco Bistro out of Brisbane who offered Soy Braised Beef Cheeks with Asian Herb Salad and crispy shallots.  A wonderful rich dish full of Aussie beef flavour but using local steers.  It reminded my why I always go to Ecco when I’m in Brisbane and have for 20 years. 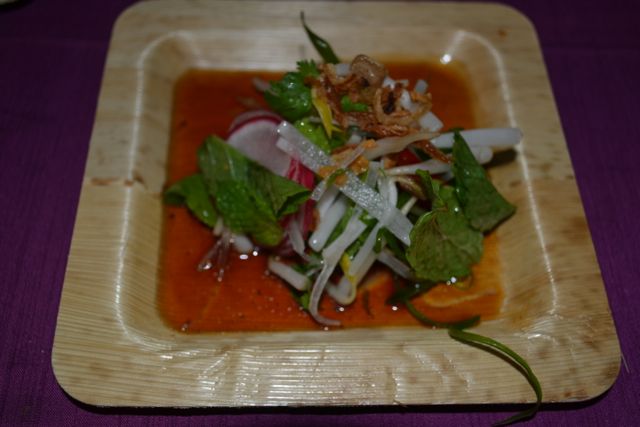 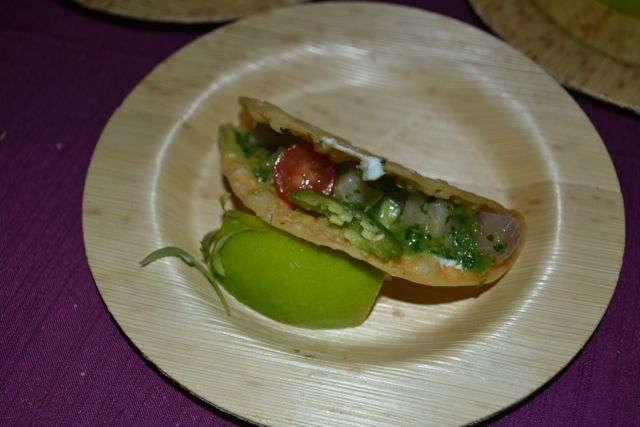 His counterpart, Executive Chef Scott Toner of Modern also played the taco card but his was Crispy Pork Belly Mu Shui with Hosui pear Apple, Baby Fennel Slaw and Habanero /Poha Bery Glaze.  Hot sweet and savoury all in one. 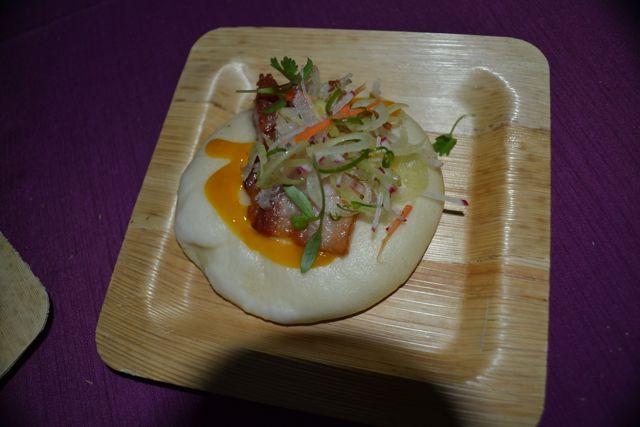 Heading into the dessert stakes, Nancy Silverton of LA’s Mozza  pulled off the next to best one with her Coconut Panna Cotta with Passionfruit Caramel  & Macadamia Nut Belli y Brutti.  It wobbled perfectly and was oh so creamy. 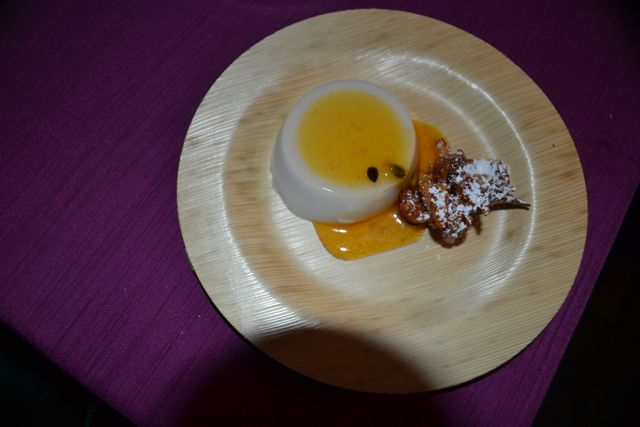 But the best dessert of all was the meatiest of all.  Michael Ginon of New York’s Hudson Valley Foie Gras made a sweet, rich and satisfying treat which was Shaved Foise Gras Logans with Macadamia Brittle, Crack Seed, Plums and toddy palm seeds.  It was almost like a meat muesli! 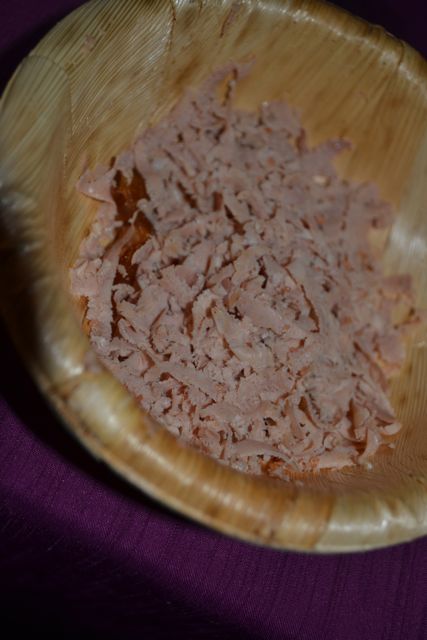 And for those in the VIP section, there was table service from a form guide for whatever they wanted as well as the shrimp, oyster, lobster and sashimi display. 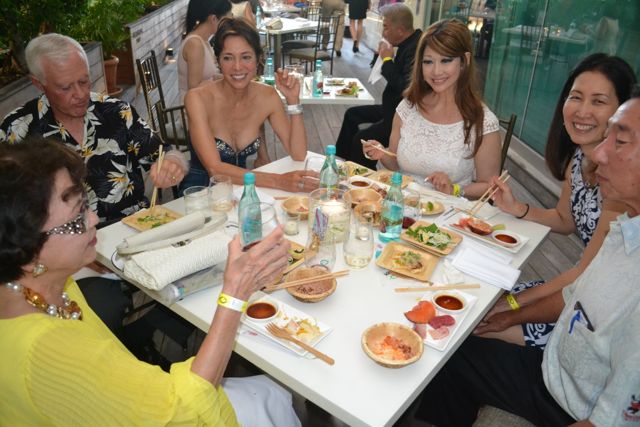 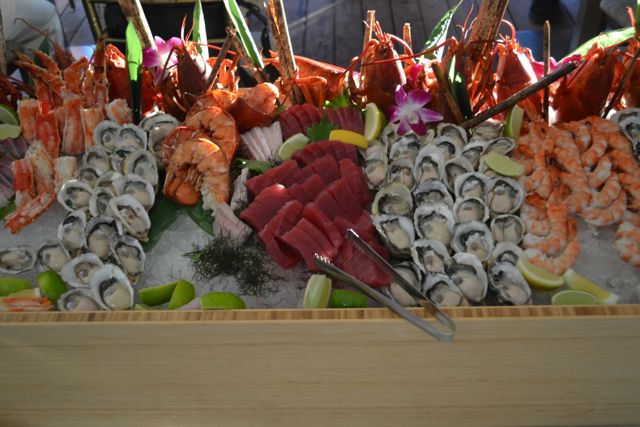 And in the end as the pool cleared (no one fell in despite the throngs though there were some close calls) it’s upstairs to dance some of this off with star chef DJs. 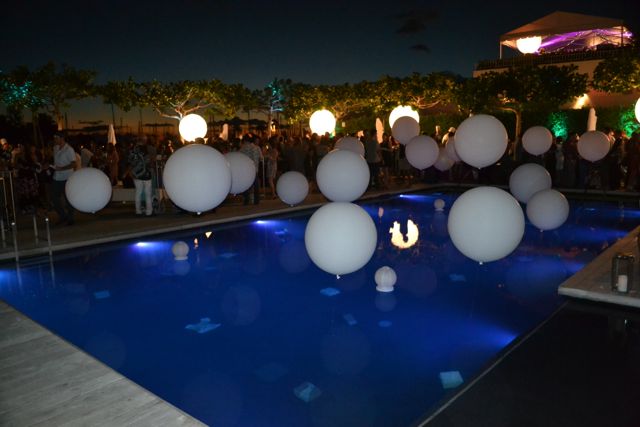 The night after this is the sold-out $1000 a head dinner at the elegant Halekulani for which I have a rest night!  Sounds like salad for the day and some shopping to flush this out.