Maui On My Mind and in My Mouth–A Starter 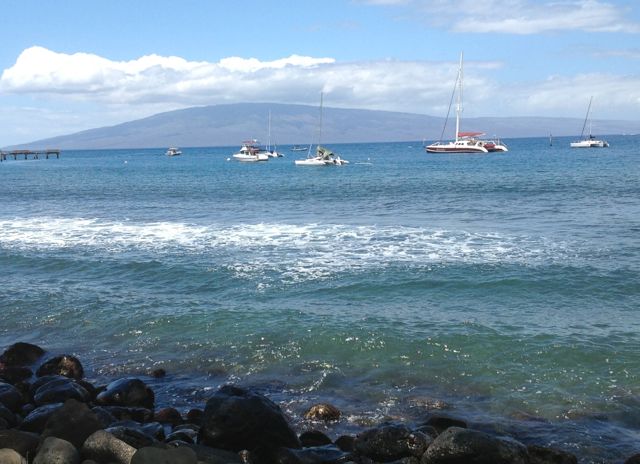 Having left the LavaLand isle of Hawaii behind, it’s a new world on Maui–The Valley Isle–with a van ride to Lahaina where the boats rock merrily in the harbour.  I’ll be taking one for a four hour trip to the island of Molokai–The Friendly Isle–at dawn tomorrow, but for now, it’s time to luxuriate in the sweet, hot winds and cool surf. 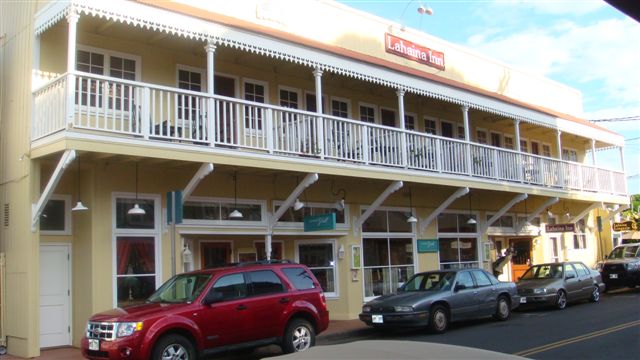 Staying at The Lahaina Inn which is a small boutique charmer filled with antiques and blissfully air conditioned, I hit the street just after landing and head for a pair of hot spots. It’s sort of training for the Ka’anapali Fresh: A Culinary Event festival that happens at the end of the week and will be a grazing success as it has in the past few years.  But for starters, I visit and old favourite I discovered two years ago. 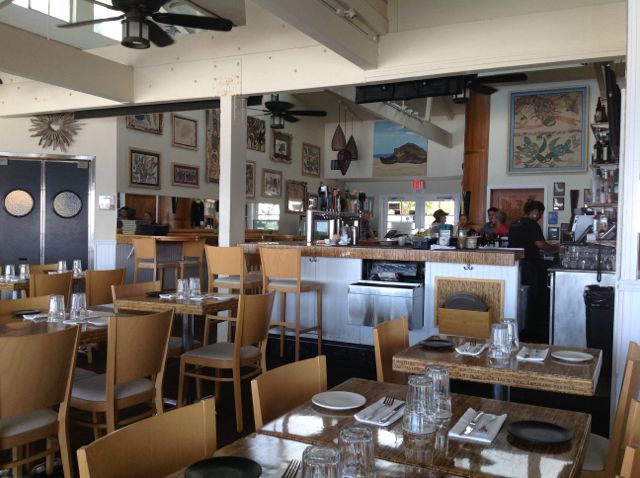 Honu and Mala are sister restaurants side-by-side on Front Street right on the surf which are the culinary children of Mark Elliman and his wife Judy.  He had started up a fine dine, Avalon, moving from Colorado  in the mid 80s and then a taco stand, Maui Tacos in 1993 which became a chain.  He forged a path of Pacific Rim Cuisine and eventually along with eleven other Hawaii Chefs formed the Hawaii Regional Cuisine Movement with Roy Yamaguchi, Sam Choy , Peter Merriman, Alan Wong, Roger Dikon, Amy Ferguson Ota, Gary Strehl, Pierre Padovanni, George Mavro, Jean Marie Josselin and Beverly Gannon.  He’s also written a book called Practise Aloha: Secrets to Living Life Hawaiian Style which is an incredible read.

Mala means Garden in Hawaiian and serves, fresh, delicious, organic foods while Honu, which means turtle, concentrates on seafood from Hawaii, the West coast and East coast of the mainland.  Perched on the rocky beach of an old wharf that was used for whaling, they command 180 degree views of the islands of Molokai, Kahoolawe (known as The Target Isle for being the practice pad for bombings and military artillery fire) and Lanai (now owned by software billionaire Larry Ellison and known as the Private Isle instead of the Pineapple Isle).  The view from my table. 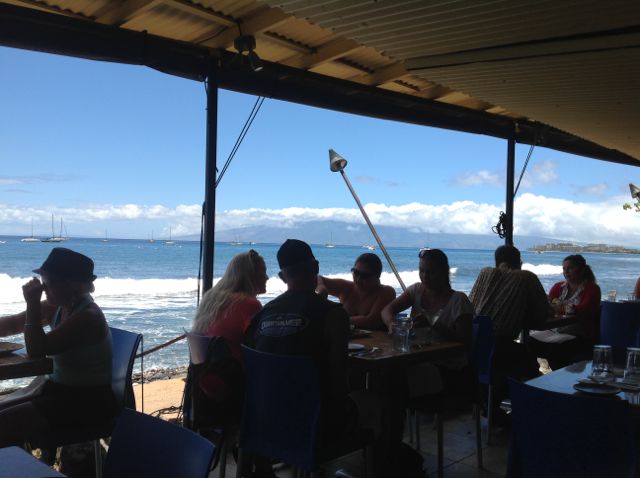 I picked Honu for lunch since you can never get enough and theirs is superb.  Two simple choices–the Crab Louie Salad and a bowl of Seafood Chowder.  For a cocktail, the Honu refresher–KAI GINGER LEMONGRASS SHOCHU, FRESH LIME SOUR & THAI BASIL WITH COCONUT WATER STRAINED INTO A HIGHBALL GLASS.  And for hydration, Plantation iced tea which is tea and pineapple juice in a tall glass. 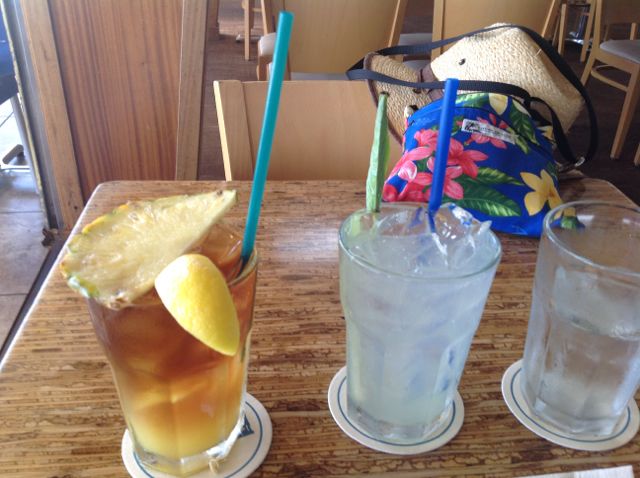 Funny enough, the Plantation Tea fooled me by its look, I thought I’d been delivered a Mai Tai on the left and lemonade in the middle with water on the right.  They have to use different coloured straws for kids and tea as opposed to adults and Mai Tais. 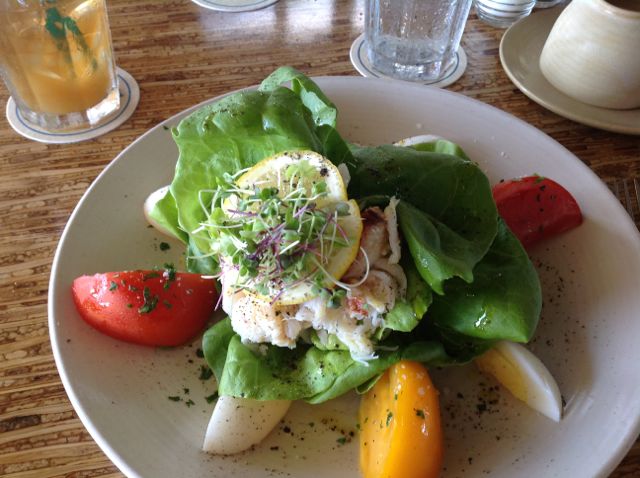 The crab was some of the best and freshest I’ve ever tasted, the butter lettuce was virginal and crisp; the heard boiled egg quartered with red and yellow tomatoes and a Louie dressing.  Flawless. 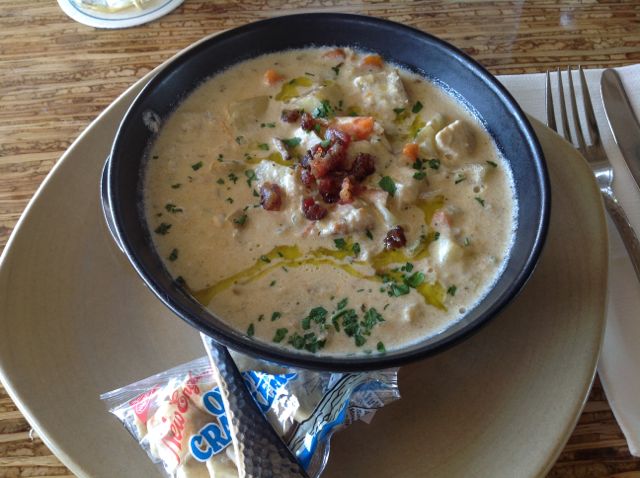 The chowder was smoky, filled with fish and clams, perfectly cooked potatoes and creamy with a pancetta crouton floating island on top.  Out of this world.

Now, time for a nap and an awakening as the skies of Maui Channel start to mellow when I get back up for a night on the town. 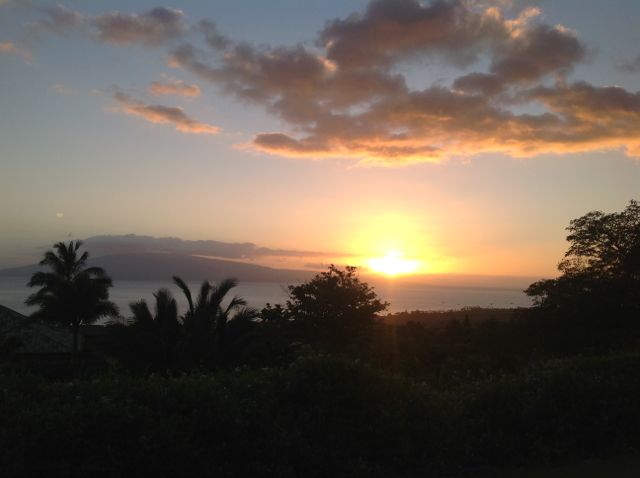 Posted on 26 August 2014 by Phil in Uncategorized