This staff t-shirt in vintage condition with STAGE on the back fromThe Kool Pacific Music Fair in 1978 just fell on my head in my bedroom closet as I was clearing out ‘older stuff’ like the Miami Vice baseball hat I’d also found.  It’s about a fortnight before I click one more notch on the odometer of life and turn 72.  Funny I can now fit into that T as well as a number of others from the 70s, having lost 50 pounds since starting Phil’s Triple Bypass, Mitral Valve Replacement Open Heart Surgery Weight Loss Diet which has slimmed me down but I wouldn’t recommend it. 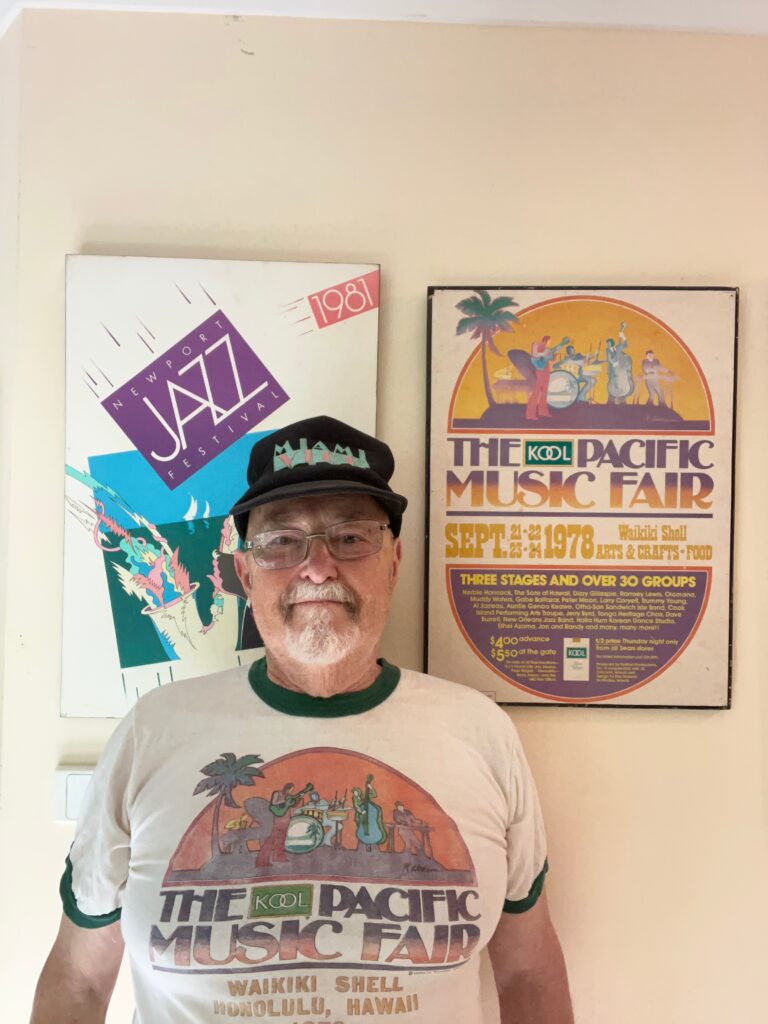 It’s been 40+ years since I sailed across the Caribbean and Pacific through the Panama Canal to Australia and I am thankful for the incredible life I’ve been granted since landing here with 5000 vinyl albums, a bunch of Hawaiian shirts (and some now vintage rock n roll t-shirts and posters), a few guitars and my 50 year old ACME Juicerator, still working fine.  Then there are the seven heavy Macintosh valve amplifiers I schlepped over here and have moved five times with the ton of records before ending here in Coffs Harbour in retirement from the music bic on my little farmeutte on top of a high hill overlooking the ocean and daily dawn vistas.

I’m lucky to have seen so many sunrises having experienced five near death experiences since I clocked out at 37 in 1987 with a cardiac arrest for 10 minutes, again in 2016 with an atrial fibrillation  at Honolulu Airport for another 10 minutes in the Twilight Zone, a stroke in 2018 and  an arrest again 1n 2020.

It’s been 50 years since I caught a round and almost karked it in a desert gunfight  (documented in this blog under “My First Murder”) and about the same number of years since I retired as a pot smuggler and hashish importer.

Posted on 1 November 2022 by Phil in Uncategorized