Taking Time to do Nothing Often Brings Everything Into Perspective 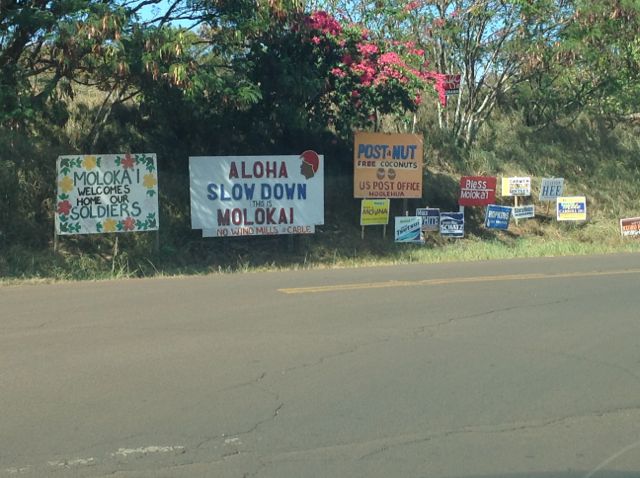 I’m on the island of Molokai which is called the Friendly Isle and is a relief to slow down on in its vortex of calm..  Taking a two hour ferry from Lahaina  after a 10 minute walk along the shore from my hotel started the reduction in speed rather than a speedy run to the airport, TSA and lining up.  A stroll in the early morning sun with waves lapping the road, the thrumming of the ferry engines, a fresh breeze caressing me as I board; you just don’t get this going to an airport. 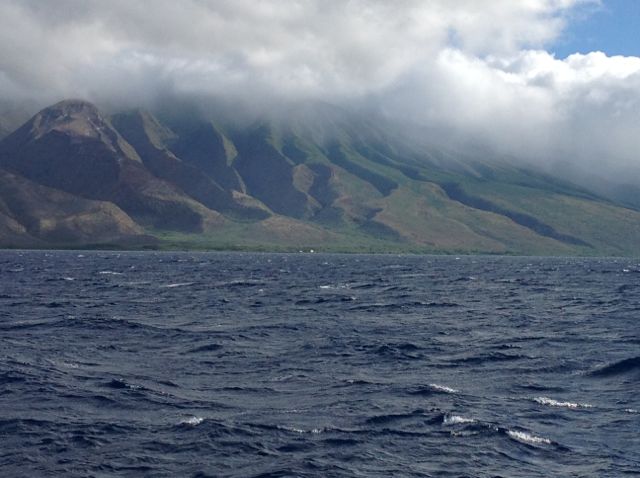 I’ve never been to Molokai though came close twice.  Now that I’m here, i’m breathing slower, moving in a torpor and laying back so easily.   It’s like stress has been vacuumed out of me on the calm trip over the Molokai Channel passing by Lanai and it’s been replaced with bliss. 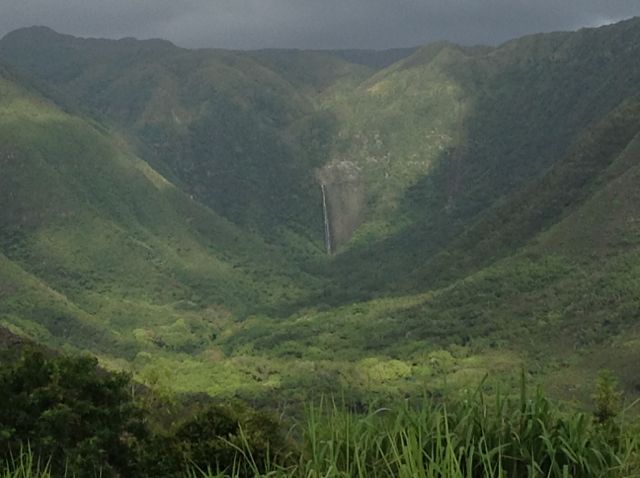 There is something about the island and its people that automatically gear you down, not wear you down.  My taxi driver from port to the top end three star Hotel Molokai is slumped in his seat, waving and lifting both hands on the wheel in a cavalcade of greetings to people he says are some of his 87 cousins and boundless friends.  Everybody knows everybody else here and the kids don’t get away with much. 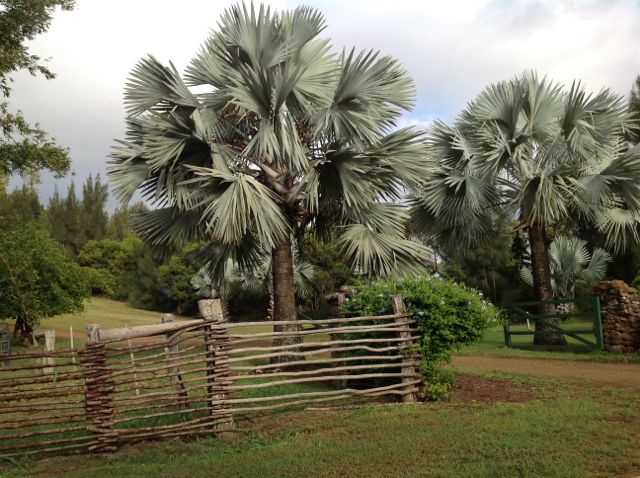 You don’t see any graffiti here and it’s a pretty clean place though a but dusty with red powder and rocks.  On one side of the lagoon, the water is brown from runoff of the recent hurricane while the other side is clear blue from the feeding of the ocean water into what used to be a captive fish pond.  Even the mosquitos are lazy.  I didn’t feel any whereas on the Big Isle you could almost saddle them.  The ubiquitous coqui frog–a little cheeper that is colonising the islands as a pest–is not really noticeable here. 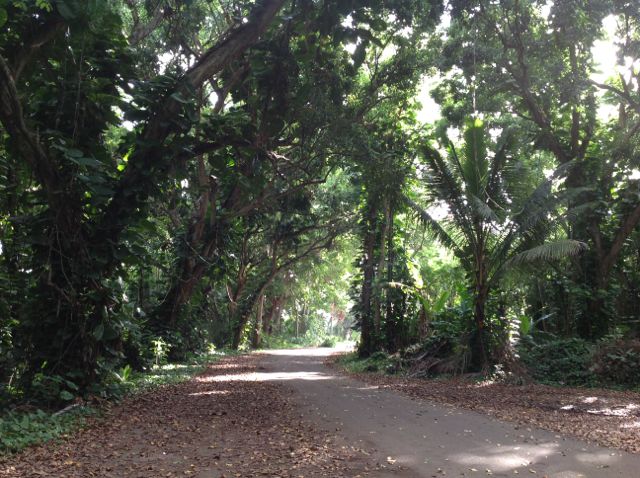 While Molokai is a food bowl for the islands, it’s also an island-wide bouquet of flowers with accompanying scents.   Groves of plumeria (frangipanis to us Aussies)  perfume the island with a base scent while fronds of tuberoses shoot a cologne of silky smells into the air.  Hibiscuses are treelike rather than little bushes.  And cacti thrive here too though they also produce their own unusual floral tributes. 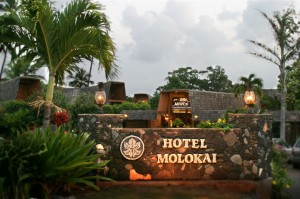 The Hotel Molokai is a surprising place, built in the tradition of Hawaiian villages with shoreline cottages and suites, it’s welcoming and the staff are too. There are only two other motels on-island–the Castle Molokai Shores and Wavecrest Resort, but this seems to be more old style ohana-run.  It’s clean and bright but not reflecting splashy jewellery of guests, their log driven accessories or fancy brand t-shirts. 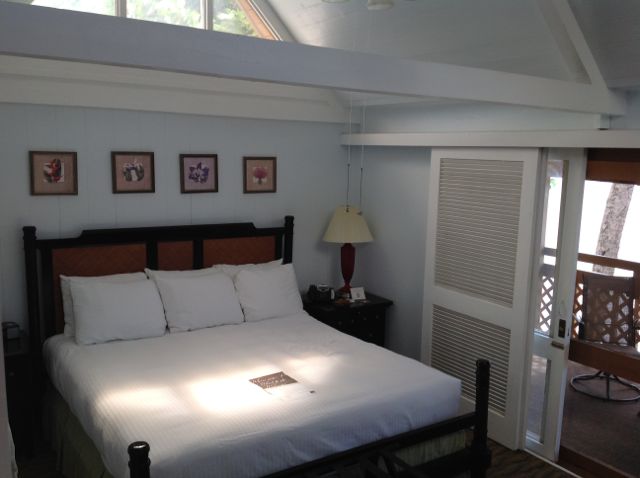 Nope, it’s simple family fare but I didn’t hear one loud kid here.  The bar was lively but pretty shut down at 10 and it was quiet as a deserted shoreline all night with nothing more than waves quietly crashing and wind rustling the palms.  My suite and most of the others overlook the surf and it’s about the closest I’ve been to it ever–about ten feet from my lanai which is spitting distance if the wind is with you and the watermelon seeds are fat. 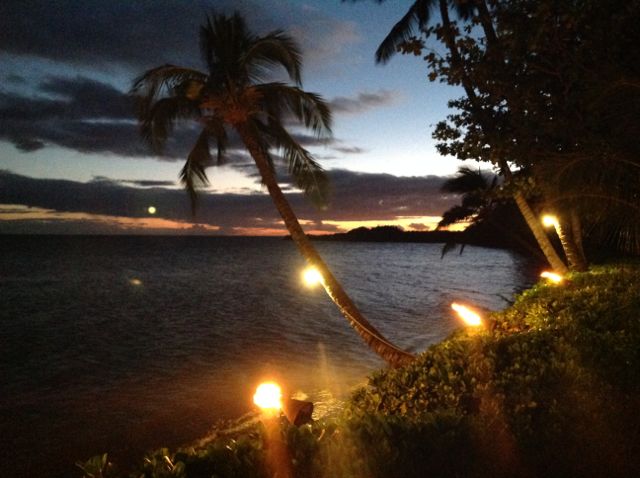 I was invited to go feral pig shooting which is legal but it didn’t strike my fancy having a 400 pound boar charging me before I have to empty a clip into him, field dress him and dispose of the warm entrails.  No thanks, I’ll take some ribs from the BBQ.  I decided to get a car for an afternoon/evening and a morning/afternoon and just cruise.  Again, no graffiti and precious little trash along the roads with the citizens proud of their aina or homeland. 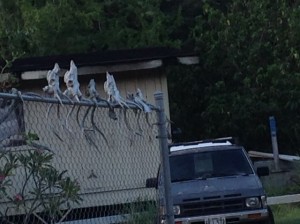 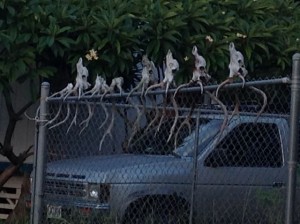 I did encounter my first  example of the hunting fetish though when I embedded myself in back country just after dawn.  A ghostly set of dried skulls with horns or more properly antlers, lined along the fence.  It was a proud display of the deer the residents had killed but not for sport solely, also for food.

Another oddity was a yard full of small a frame houses more like tiny sandwich boards.  But they were houses for the fighting cocks the Filipinas raise here for export to their home country and other islands as well as their use here in illegal games.  The chickens’ escapes during tropical storms or slipping away is why the island, like Kauai, has wild colourful and flashy poultry everywhere and the first sound to the mornings is cocks crowing. 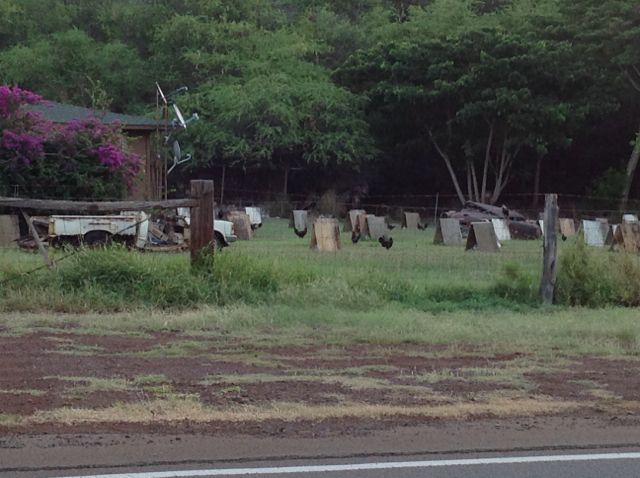 Riding along the continually narrowing two lane blacktop as it shrinks entering the tree-tunnel forest and winds around shorelines dotted by  ancient fish ponds in the surf, that magic feeling of being somewhat primitive comes on along with a sense of wonder.  I have many WOW! Moments and AHHHH! Sighs as I wend my way closer to the black cliffs and verdant jade valleys. 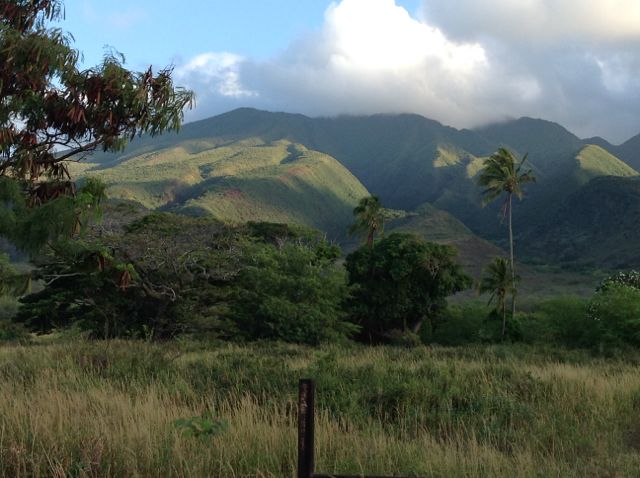 I’m happily Lost!  Getting Lost is my goal on trips like this, knowing that home is just a GPS plug in away, but not knowing where I am going and additionally having few roads to journey makes a trip like this more spiritual than touristy. 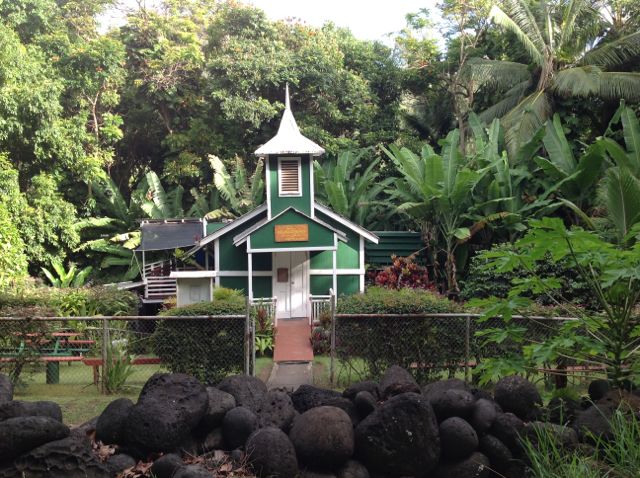 Leaving town at dawn means I beat any tour busses (didn’t see a single one all morning) and I don’t have to share overlooks with the aloha shirt tourist brigades stopping and photographing and leaving again, never seeming to stop and feel the Mana or Spirit of the Land and Ancestors. 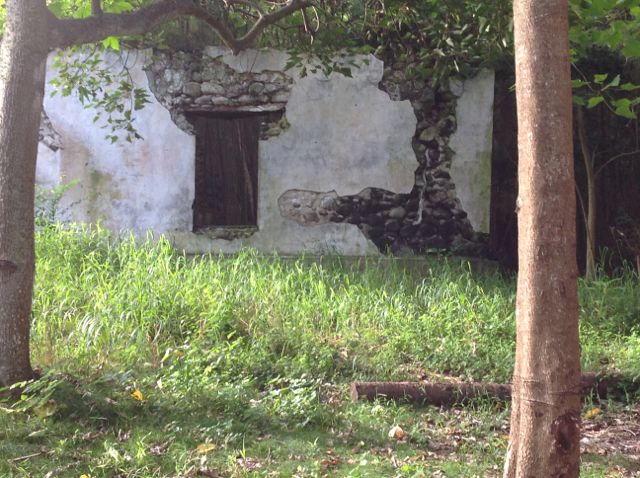 Any twist in the road can be a revelation.  An overlook to a hidden beach.  Jewels bouncing off of waves.

Odd trees, plants, flowers, fences and architecture sprout up in view and distract you but keep urging you on until you hit that spot at the end of the road that either stops you for a turnaround or seduces you to take a trail, a beach walk or simply sit back, then lay back and let your mind drift. 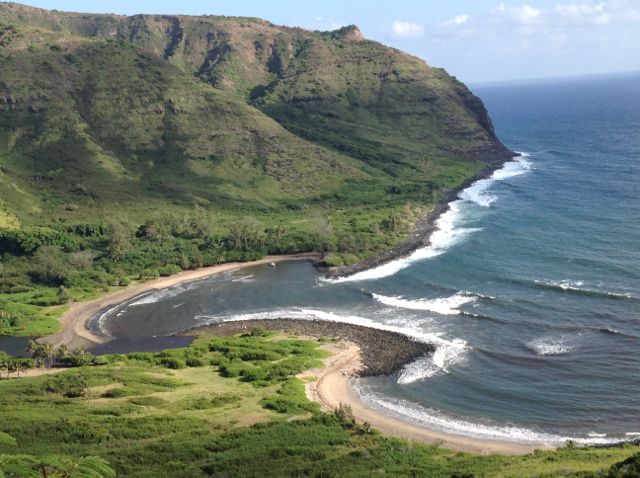 Then too soon, it’s a 4 am wake up call for the dawn ferry and you leave behind only footsteps and take home memories. 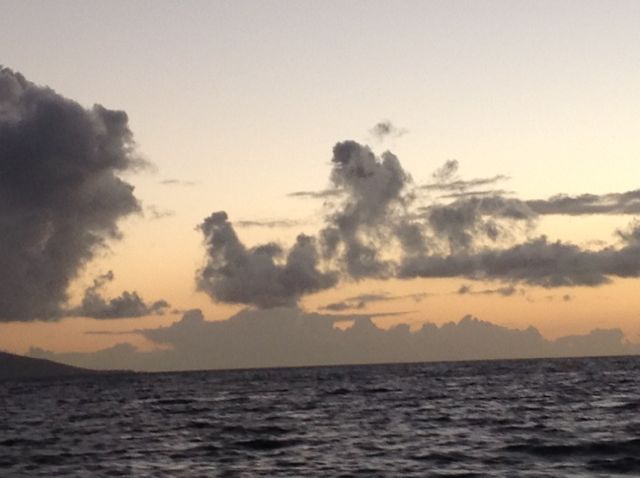 It’s been an interesting isle to explore and leaves me only one more that I have not yet visited which is Niihau, a private island where only full blooded Hawaiians live in isolated bliss with their traditions and spirit intact.  Coming to Molokai shows me the path. 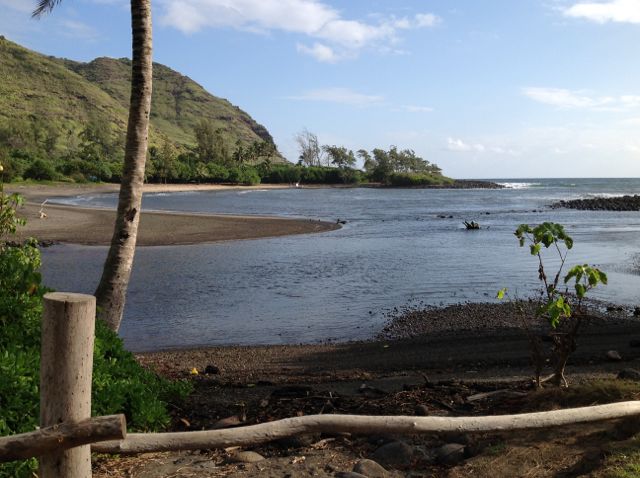 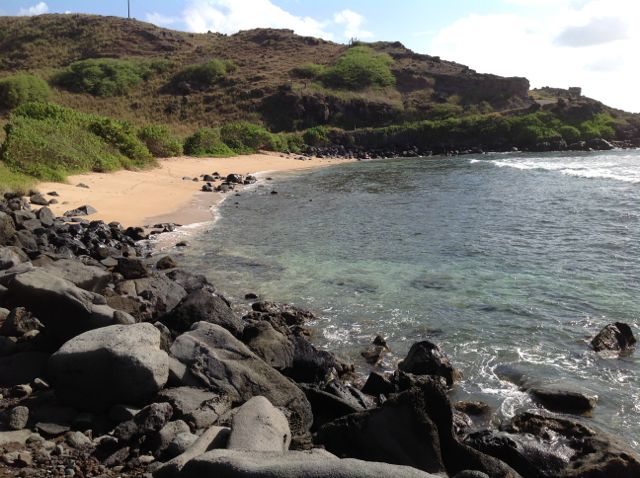 ← Maui On My Mind and in My Mouth–A Starter
Maui Munches On Where the World Comes to Play! Ka’anapali Fresh on the Beach →