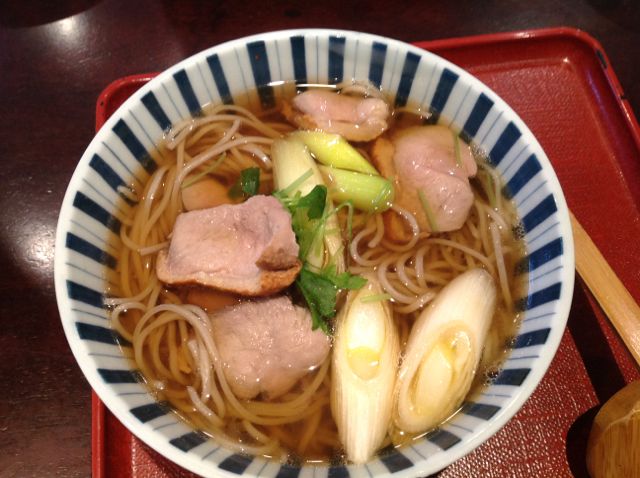 SOBA… so simple.  A buckwheat noodle that sends japanese into nirvana.  I never really appreciated it.  Until my mate Shep Gordon told me of a restaurant tucked away on a side street in Waikiki, nestled between two other Japanese restaurants where a pair of brothers have perfected the art of making it from buckwheat flour imported from Japan and formed into the perfect noodle.

There is only pic for this post because it is perfection–a duck broth that is flavourful with umami and silky in its consistency with chucks of duck and green onions.  Nothing else.  There doesn’t need to be anything else though there are a lot of other dishes including a shrimp tempura I was tempted with.

The restaurant is called Shingen, it was originally Matsugen at 255 Beachwalk in Waikiki but the two brothers who created it and became zen masters of soba sold out and the new owners have not only kept up the trait ion of making their own buckwheat sobs, they have taken it to a new level.

I must admit that I could have used some training.  I’ve never really sucked my noodles up from chopstick in a bowl but somehow I managed without snickers from the oriental clientele.  The silken strands were flavoursome and the broth was subtle but complex.  Those rings and shards of green onion made the dish.  No leftovers.

No website but lots of reviews on tripadvisor and Yelp of which the current ones include reviews.  http://www.yelp.com/biz/shingen-honolulu.

I’ll add it to my list of holes in the wall for under $20, Clean, comfortable, welcoming and close to the action on Kalakaua.