Tripp’s Over The Hill 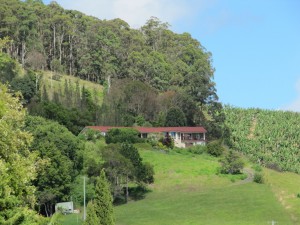 It was a huge move November 2010 to Coffs Harbour from the Sydney inner-city ‘Compound’ which sold for $1.5 million, setting him up in a house on a high hill with ocean views–living the dream.   When emptied out, the Newtown HQ of Phil, IMMEDIA!’s offices and tropical backyard comprised four truckloads of records, books, furniture, a lifetime of personal effects, an 800 bottle wine collection, kitchen tools and yes a little junk. But we got it all up The Hill over four weeks of driving back and forth and on November 17, my 60th birthday, I was settled in on the balcony with a glass of pinot watching the pastel shades of sunset shift to the murmuring of birds, wisps of wind and croaking of frogs. And there was also a cloud of fruit bats, tens of thousands of them, flying parallel to the patio and about 100 meters out which is now a near nightly occurrence.
I gave myself two years but after that move I had the incentive of not wanting to ever shift that crap again so I’m stuck here: with the 180 degree views over the Pacific from high up yet just far enough away not to get salt spray and with a vast array of wildlife surrounding me. It’s quiet, calm and a centre of serenity with a view of the city but also a detachment from it. I’m not lonely here but I am happy alone in the solitude.
I can see my surroundings in peace and quiet but because of the steepness of The Hill, no one really wants to attempt the driveway frivolously. Besides, the sign on the way up “IS THERE LIFE AFTER DEATH? TRESPASS HERE AND FIND OUT! “ seems to get the message across to those with criminal intent who don’t want to be caught or shot. The Mormon missionaries and Jehovah’s Witnesses avoid me too! It truly is a Fortress of Solitude, just like Superman had. 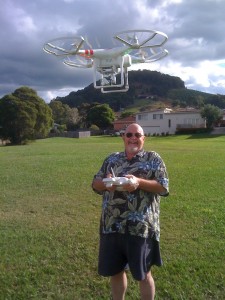 The property sits on a few acres surrounded by koala reserve and forest to the rear, banana plantation and no houses to the left and Wildlife Reserve to the right going all the way down The Hill. I can crank the music up all the way without the neighbours being able to complain, walk around nekkid watering my garden or cultivating my crops. The soundtrack to life is as varied as you can get—Dixie Rock countered by Smooth Jazz; Old School R&B balanced by Blues; Cajun, Creole and Swamp form Nawlins with Jazz, Roots and acoustic comtemporary to boot. No Opera or Classical but that’s how I roll. 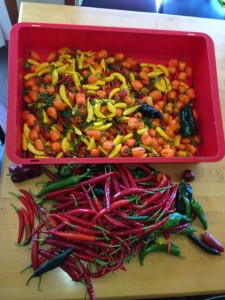 Never having been a gardener before, I enlisted one to plant native species for birds and wildlife while converting The Hill to a subtropical paradise. With her help, I was able to ring the balcony with irrigated planters in the air so no pests could crawl to them. I put in some huge 3 x 1.5 x 1 meter corrugated tubs around the driveway for veggies and ringed the fences with passionfruit. I started a chili pepper operation with fenced beds, pots and bins, now having up to 22 varieties of chillies. 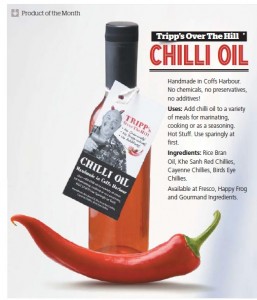 I started selling my exotic chilies to local restaurants and chef-addicts at a premium. These include Poblanos, Anchos, Anaheims, Caysun, Guero, Serrano, Red & Green Jalapeno, New Mexican, Tabasco, Guajillo, Red, Yellow and Chocolate Habaneros, Birds Eye, Bhut Jolukia, Butch T Scorpions, Scotch Bonnet and Bells. I also started up a mini industry of Tripp’s Over The Hill Chilli Oil which coame in 375 ml bottles with several local outlets.  I swear by chillis as a circulatory cleanser and the best way to spice up a blended maragarita.  Half of what I eat, I grow, using a high end dehydrator to make dried fruits like chili mango and tomato chips, beef and fish jerky plus dried chillies for ristras.  My lime, lemon, kaffir and orange trees keep me in citrus as well as the mint for Mojitos. 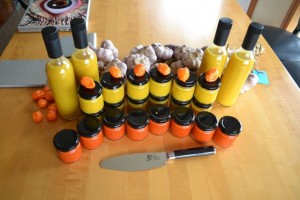 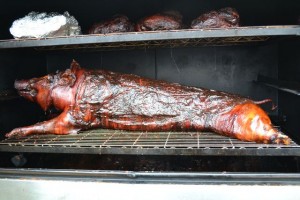 Barbeques are a mighty affair here with a Texas smoker a Weber BBQ and a Pro Q smoker/BBQ with a balcony large enough to comfortably seat 16 or so. I have a whole new coterie of friends here and visitors from Sydney or overseas, but pretty much cut off from the music business that I served 40 years in.

When I retired from that circus, I still had a bit of carny blood in me and so retained the representation of the South by Southwest Music, Film and Interactive Conferences and Festivals which I’d handled since 2002. In 2019 I retired from this position having peaked with 54 AUS bands, 11 NZ artists and one Hawaiian act as well as  close to 900 delegates from Australia, New Zealand and Hawai’i.

I’m lucky to have had travel writing as a talent and spent at least three months a year overseas in Hawaii, the American West and South, Florida Keys, Austin, Europe and other great destinations. Because I’ve elected to live alone happily in solitude, I’m able to zip off to Australian islands like Lord Howe and Heron as well as Broome in WA and Tasmania with frequency but without worrying about leaving someone behind or having to take them along. 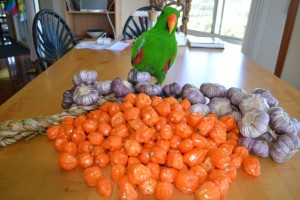 Jackson the Eclectus parrot, who is my feather kid of 22 years, rules the roost up here over flocks of King Parrots,  rainbow lorikeets, yellow tail black cockatoos, bush turkeys, owls, pheasants and many other bird breeds. Roos cavort in the paddock below most mornings and we have a house wallaby, Wally, who sleeps by the back door and eats a few metres from the house in the mornings. There’s also a momma lace monitor Goanna that stretches three metres in length on a sunny tree with he one and two metre progeny sucking up eggs from my front door and Petula the carpet python who lives in the roof at four metres in length. Very friendly and keeps the house mouse-free while her progeny around the property take care of bush rats and the occasional bandicoot. 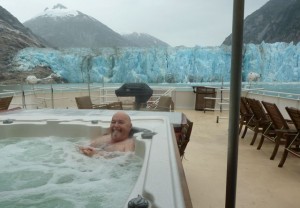 All in all, a fitting finale to a life well-lived and I hope to keep making encores happen in your world as I travel the planet.

<Previous: He Dies and is Reborn <