I get asked a lot… “Hey! Where did you get that!?!” and I figured that if I was going to have fun on my own site, I might as well share the sources of fun stuff. Who knows? One of them may decide to be my sponsor or seek a commercial endorsement. OK, I have over 580 and I’ve collected them for decades. My motto is “Speak softly and wear a loud shirt!” Though I’m not the quiet, shy and retiring type, Aloha shirts have become my trademark. Why wear anything else? Other than board shorts and great slip on shoes.

You can see the article I did on these floral fantasies for Business Review Weekly here http://www.philtripp.com/pdf/shirt.pdf or check out the Wiki at http://en.wikipedia.org/wiki/Aloha_shirt on Aloha Shirts.

Whenever I’m in Honolulu, I head for Baileys Antiques and Aloha Shirts http://alohashirts.com/ where 15,000 garments are housed in four categories; New, Used, Vintage and Specialty. You’ll find some cheapo polyester used shirts for $3.99 with a norm of $19.99 and up for the better brands and designs. They have replicas which are rayon and gorgeous. Their vintage shirts are pricey as hell and divided into 70s, 60s, and 30s-50s, some well over $1000.

My main shirt brand of which I have over 200 is Jams World http://www.jamsworld.com which has rayon fabric and totally cool patterns. They are available around Honolulu and Hawaii in their own stores and also on the mainland. But they have a little known outlet store tucked away in an industrial district off their factory at 1451 Kalani Street a couple of blocks off Nimitz Hwy at Waiakamilo Rd.

There is also a guy who owns 700 of that style and his site with all the patterns is http://www.nwmangum.com/JamsWorld/ but it is occasionally off service.

My second fave is Tommy Bahama and I probably have about 150 of them http://www.tommybahama.com.

The 50 year old Kahala shirts has returned at http://www.kahalashirts.com/

Tori Richard has a broad range of prints at http://www.toririchard.com/

Paradise Found has the Tom Selleck Magnum PI bird shirt and many others at hwww.paradisefoundhawaiianshirts.com/

The Avanti line of silk shirts is at http://www.alohashirt.com.

You can see a lot of designs at http://www.alohashirtshop.com/ which sells a number of brands.

Flying To The US

It’s no secret why we use Brad Thomas of Entertainment Travel Partners (bradt@travelpartners.com.au) not only for our personal travel requirements but also as the official travel and transport agent for the 650 or so folk who head to South by Southwest Music, Film and Interactive Conferences and Festivals in Austin each year (http://www.sxsw.com). Because we have come to dislike Qantas immensely–first for their incredible lack of service and now more for their raping of the Frequent Flyer Scheme–we have come up with great alternatives for flying to the US for our clients and friends.
We use two airlines with great stopovers. Hawaiian Airlines and Air Tahiti Nui both operate regular services through their home ports of Honolulu and Papeete Tahiti respectively to help break up sectors for a relaxing rest or holiday over or back.
Hawaiian Airlines http://www.hawaiianair.com.au/ has daily flights to Honolulu with an excellent option of Standby Upgrades of A$700 (as of July 1 2013) where you can buy an upgrade if there are any unsold seats at time of check in. I’ve done this 8 times out of ten and the trick is to be in queue 30-45 minutes ahead of opening time. Reservations 1300 669 106
Air Tahiti Nui http://www.airtahitinui.com.au/ goes to Los Angeles and continues on to Paris with a stopover in Papeete where you can head off to other islands like Bora Bora, Moorea and many more. Instead of the Qantas Business Class price of A$12,000 return from SYD to LAX, I did the flights for A$6350 for the same level of service at half the price. Reservations 1 300 732 415

I’m a confirmed scuba addict and can often be found off the reefs of Kona that are outlined at Dick Dresie’s book on Shore Diving in Kona as a free download PDF at http://www.pdfebookds.com/Dick-Dresie-PDF6-1169588/
This site details other islands at http://www.shorediving.com/Earth/Hawaii/. I wouldn’t dive with anyone else other than Jacks Diving Locker which is a seamless operation http://www.jacksdivinglocker.com/ and Torpedo Tours Kona for underwater scooters. http://www.torpedotours.com/

Whether it’ Barqs Diet Root Beer, Creole and Cajun spices, Reeses Peanut Butter Cups, chile sauces, barbecue sauces or just about any addictive legal food or beverage, they’ve got them at USA FOODS www.usafoods.com.au and can ship them anywhere in Australia. They have a rotating list of items and have the best online mail order experience I’ve encountered.
Fireworks Foods http://www.fireworksfoods.com.au/ has an incredible array of canned foods as well as fresh blue corn, red corn and yellow corn tortillas plus a staggering amount of sauces and salsas. Service is killer and they have products that USA Foods may not carry or have in stock, like Stubbs BBQ Sauce. They even stock chili pepper seeds for planting.

At my age, it’s one of the few vices left! Locally, I source a couple of great blends from Amelia Franklin’s roastery in Bellingen http://www.ameliafranklin.com.au–Little Black Bello and Mamma Quilla. I use Allpress Espresso Carmelo House Blend which I pick up when in Sydney.

But I routinely haul back 10 kilos of Kona and Ka’u Coffee from the Big Island a couple of times a year. My five faves are:

My trusty Espresso machine is a Kitchen Aid KES 100 model with a matching grinder, both of which have proven to be excellent investments and I’ve got to tip my hat to the service folk of Peter McInnes and Co in Newcastle who keep them in top condition. I’ve been an Apple evangelist for over 25 years though I started with a Tandy Model 100 in 1985. Now it’s a Mac Pro, 30 inch Apple screen, and a Magic Trackpad for the office. My office world gets rocked by a Bose Companion system with subwoofer that makes working a joy.
I’ve also got a 17” Powerbook in the bedroom with a Bose System and Headphones as well as a Powerbook in the dining room for breakfast reading and a 15” for the road. Add an iPad 3 to the mix and an iPhone 5 to make me a fanboy. They’re all engraved and locateable remotely by tracking software if you’re thinking of nicking them. That’s of course if you get past the Dropcam video camera security system and alarms linked to the devices so I can watch the house from afar and even check in on the parrot as Jackson has his own HD Dropcam with audio so I can talk back to him.

After decades of having high end and reliable BOSE systems with subwoofers and satellite surround sound speakers, I recently decide to replace my main system with a SONOS rig in surround and two Songs One’s as satellites for the kitchen.  Absolutely love them and added a SONOS Move speaker for the balcony which already has four BOSE outdoor speakers and two Yamaha amps powering the Tiki Hut.  These are linked to my Alexa Dot AI setup on an Amazon Unlimited US account as well as an Apple iTouch which absolutely rocks!  My server has 75,000 songs on iTunes, most of which I ripped from vinyl and CD.

There are several Alexa Echos and Dots throughout the house, two of which are linked into BOSE systems in the bedroom and my office Soundtouch.  The mesh wireless network feeds them all in sync so room to room, it’s in unison.  Headphones are Bose for the bike and beachwalk.  For the bedroom computer  and TV, a set of Nuraphone headphones colours in my audio wirelessly and they are incredible.

When you live with live animals and lotsa gear, you have to have a system that makes you feel covered and the Dropcam http://www.dropcam.com camera setup is comprehensive. Aside from being accessible on the web from anywhere, I also keep an eye on everything from my iPhone which gets alerts if movement is detected and has a talk back and listen function.

After owning a couple of Suzuki Vitaras, we settled on the Nissan X-Trail which was actually our dogs’ and parrots’ car, we just drove them in it for them. It’s kitted out with satellite navigation, stereo, iPod integration, Bluetooth phone system and DVD. The latter so the dogs could watch 101 Dalmatians while we cruised to pet friendly accommodation. Now it’s Jackson’s car but he’s real excited to be getting a Tesla X SUV in 2014.

Rental Cars In The US

Since I head over there a lot, I have exclusively used Alamo but rent the cars in advance through Asia Pacific Travel Marketing Services in Sydney which has a great deal that is inclusive of all insurances and fees called the Silver Inclusive package. It saves a lot of time and hassle as well as expense of insurance if bought at the time of rental. They’re at www.aptms.com.au or call Jacey on 1300 329 912 and tell her Tripp sent you. jacey.fleming@aptms.com.au No, I don’t get a commission! 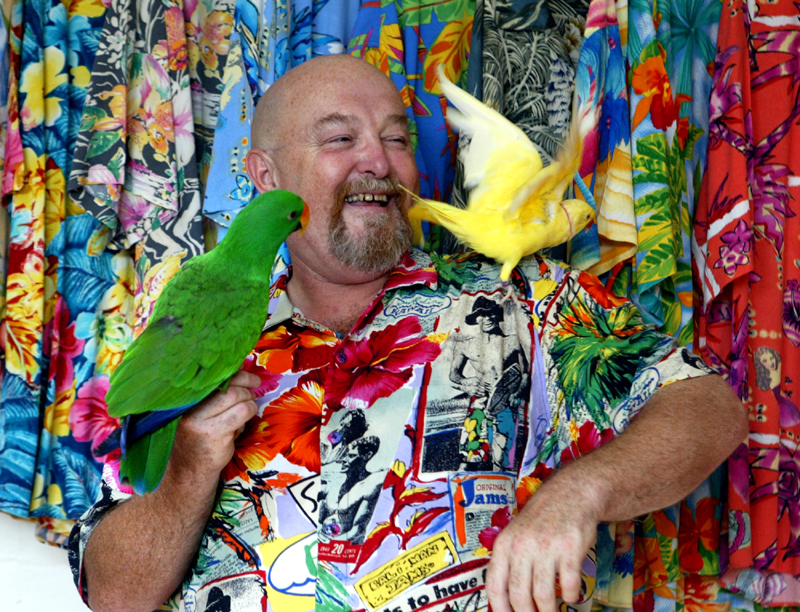 Phil loves his parrots. Jackson (left) is a male Red Sided Eclectus aged 15 years in 2013 and will probably live to 45. Roger (right) was a Lutino male Indian Ringneck who passed away at 15 in 2008. Though I’d love an African Grey or Amazon, I think I’m going to have to be a one bird man for now. Besides with his vocabulary of about 40 words and phrases, Jacko is a riot to be around.