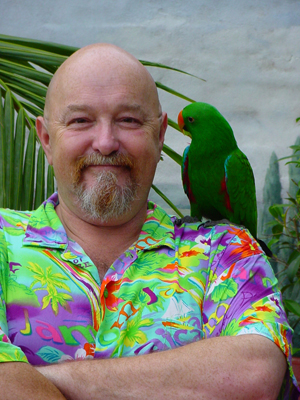 “It’s never too late to have a happy childhood!”  has been the credo of this creative colossus as he propelled himself through 40 years in the music business, publishing and online communications to his current state of being semi-retired in his early 60s.  Living the dream on a mount overlooking the Pacific Ocean in a subtropical small city microclimate six hours North of Sydney, he grows organic chilli peppers, has been a renowned travel writer and represented South by Southwest Festivals & Conferences in Australasia & Hawai’i from 2002-2019.  At 70 now, he’s finishing his second book, still pursuing the perfect pinot noir and watching the world and wildlife go by his balcony.

He’s enjoyed a colourful life in Hawaiian shirts, run a few creative content businesses, written thousands of articles for leading newspapers, magazines and online, enraged many powerful people, stuck up for the little guy in the music industry and generally had an incredible amount of fun, which he shares here.

From a start as a frustrated musician, he saved the world from his mediocrity and built a long and diverse career in the business of music. His company IMMEDIA! published the AustralAsian Music Industry Directory for 23 years; produced the biennial AustralAsian Music Business Conference for over 19 years and ran the leading music business website TheMusic.com.au.

In 2010 on his 60th birthday, he divested his print and online businesses, sold his Newtown inner-city Sydney compound, took the bags of cash, his music and Hawaiiana and moved to Coffs Harbour to semi-retirement. Now he happily whiles away his days with 22 year old Ecelectus Parrot Jackson within an organic set of gardens high on a hill overlooking the ocean—his dream from youthful years.

As an Army brat, he travelled the world with his military police officer father and later became a criminal himself.  At 20 he was involved in the importation of fine green stones from Jamaica, Colombia and Mexico as well as gummy blond, brown and black bricks from Eurasia. But he left that career path and became a top production and tour manager with major rock, blues, jazz and soul music artists in the 70s and 80s handling concerts and festivals in various cities and countries from small venues to stadiums.

Moving to Australia in the early 80s, he switched career paths again and his skills as a freelance writer and investigative journalist racked up over 100 media outlets with stories on the music industry, music video, email and online music that far back as well as trends in music technology and culture. He’s also turned a hobby of penning travel tales to being a prolific and respected travel writer.

From a boyhood of dogs and snakes, to early adulthood with a tarantula and iguana as pets, he and his former partner Lisa Treen created the upmarket quarterly magazine Urban Animal in 2004 and made it the pet industry’s leading pet lifestyle magazine.  She took over the title on his retirement and they remain friends.  He is now surrounded by wild pythons, goannas, other snakes and reptiles and an amazing amount of protected birdlife and wildlife–even koalas and kangaroos!

He’s also a Hawaii-o-phile who has Australia’s largest collection of Hawaiian shirts, Hawaiian music and Hawaiian cookbooks. Having been back and forth to the islands since he was 7, he still maintains the ringtone of Hawaii-5-0 on his mobile 60+ years later.  But of course, he is unlikely to ever be able to back to AlohaLand with the current pandemic and rigors of long haul travel.