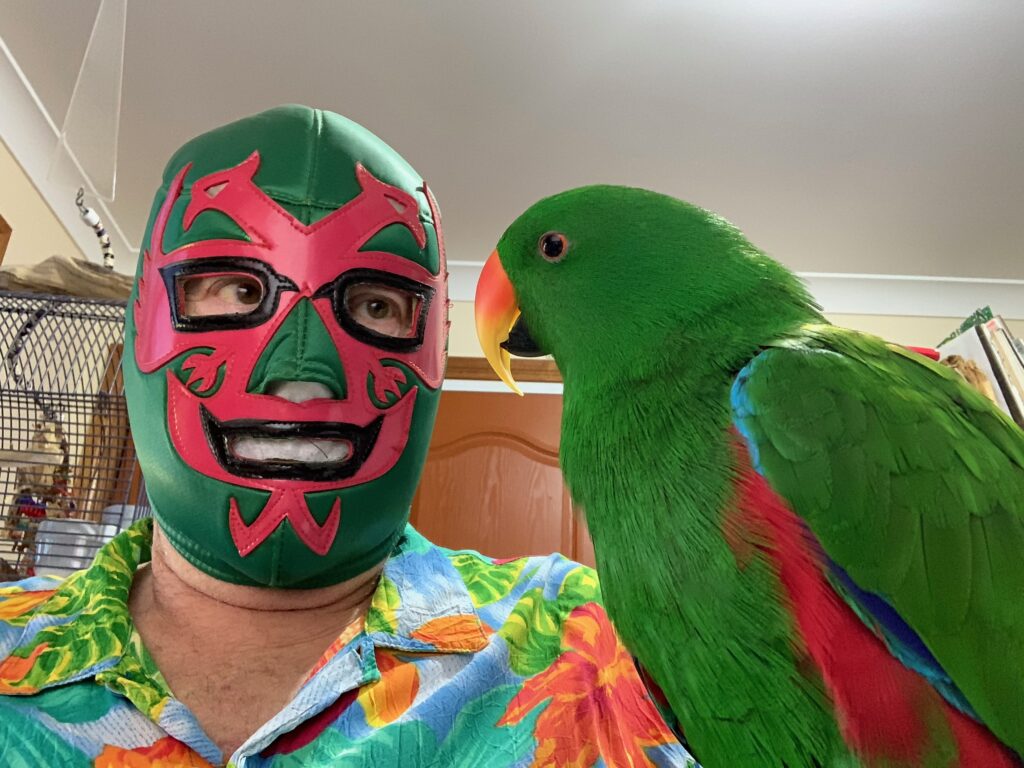 Me & Jacko in Better Days–EARLY JULY 2021  Yes I’m legally masked with nose/mouth filter in my Mexican wrestler’s Luchador.  Jacko has a waiver.

People keep saying “Your colour has really returned!” as I was appearing grey and corpselike as I fought two near-death incidents in the last two months.   Just like they say “Gee you’ve lost weight!” when they see you after a while and never mean it.  They figure that’s what you want to hear like, “Nice shirt and hat combo.”  Fact is I’ve lost over 20 kilos after surgery and hit under 100 kilos for the first time in maybe 20 years.  Now in COVID lockdown and with my crepe-appearing  skin hanging a bit, I’ve had a return of my sense of humour as well as dress sense.  I still have to go out for doctor’s appointments, blood tests, cardiac rehab classes and the occasional shopping trip.  So I’ve decided to amp up the mandatory masking rule with my own Mex modification.  People tend to leave me alone on the street these days in this getup.

I had my first cardiac arrest in the middle of massive open heart surgery May 7 at Sydney’s St Vincent Hospital and the second a fortnight later as I was being wheeled into the emergency department due to a sudden bleed out at my home in Coffs Harbour, recovering from the surgery.  It’s now the beginning of a new financial year (July 4), a new life for me after a month of recovery at home and a new generation of technology that is keeping me monitored, alive, safe and comfortable.   All up this exercise would have cost about US$900,000 in hospital, surgery and recovery fees making me the .6 Million Dollar Man.  But thanks to our incredible Australian social medicine system all the medical stuff only cost me about $1500 in a private hospital and I’ve also gained a few tech innovations along the way. 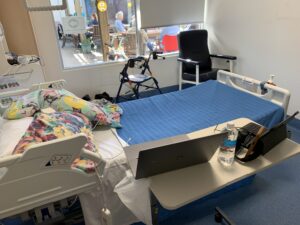 The E suite in Coffs Hospital

But it’s the accessories that will kill you.  Thank Goddess that I researched and installed an elevator three years ago thinking one day I’d need one to remain living at home.  Anticipating some mobility issues, I bought an indoor wheelchair which I’ve rarely used, a wheely walker which is still waiting for a stroll and a few other bits and pieces like an unfilled  urine bottle I thought I’d need.  Turns out I didn’t.  Recovery has been swift, health has returned but there have been more devices added.  I joke that my retail hang used to be Bunnings but lately it has been WillAid ( a disability store chain).

Aside from three cardiac bypasses and the replacement of a dying mitral valve in my heart, the 8.5 hour period that my heart and lungs were being taken over by a machine allowed my surgeons the luxury of replacing my five year old pacemaker/defibrillator.  It is about the size of an old Zippo cigarette lighter, inserted near my heart with the ability to detect heart rhythm anomalies including failure to continue beating.  It then shocks me back to life.  This newer model has a stronger battery, uses wireless technology to transmit and receive signals from my heart while I am asleep by telemetry between my bedside and Medtronics server farm in the US.  They also rewired the network of leads in my heart and upgraded the capabilities of the unit to detect arrythmia or heart failure and shock it back into sync.

From heart to transmitter via Bluetooth to the cloud and back.  Medtronics Cobalt XT HF CRT-D MRI Sure Scan

I can monitor it with an app on the iPhone or iPad, my cardiologist gets an alert in his inbox if there are any anomalies and the whole shebang will last 10 years before the battery needs to be replaced by simple keyhole surgery.  It costs about US$75,000 in America, free here, but is priceless if it saves your life suddenly when your heart goes into arrest.  That’s called the ‘Jesus Jolt’ due to the expletive you let out when it goes off in your chest and rocks your world.

The Libre Freestyle sensor pasted under my arm

The latest device I have attached to my body took no surgery cuts or insertions.  A disc the size of a US quarter or Aussie 10 cent piece lies glued for two weeks flat against the skin under my arm and is the sensor for a CGM or Continuous Glucose Monitor that constantly measures the sugars in my body by a small fibre probe that painlessly resides just under the skin.  Where I used to have to prick my fingers four times or more a day to draw a blood droplet that was then sucked up a replaceable strip and fed into a reader, this Freestyle Libre unit just needs to be waved under the sensor device which gives me an instant reading and a daily graph which shows my glucose levels for the past 8 hours on screen.  It holds a history of a couple of weeks of stats and graphs which can be accessed wirelessly on my iPhone, iPad or desktop for an instant picture of my health in that realm.

Perhaps 10 times a day I test my blood sugars and watch as they go up and down in reaction to what I eat or drink as well as exercise.  It’s a miraculous device that eliminates the need for painful pricking and sore fingers and the sensor lasts two weeks before you pull it off your skin easily and self adhere a new one in under a minute.  It comes at a price though–about $100 a pop for a sensor which lasts a fortnight–though the reader was given to at no cost.  Reminds me of shaver economics; a free razor but costly replacement blades.  The technology is so new here that it is not yet subsidised by the government but it should be free within the next few months. 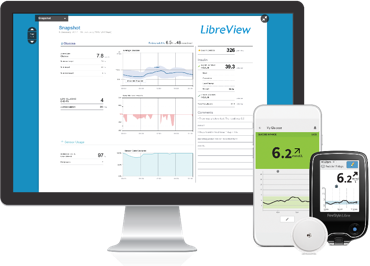 From sensor to reader to phone, tablet or desktop.

Those of you who know me intimately understand my addiction to the Alexa artificial intelligence system of voice driven commands to devices that program and change music, answer questions, play podcasts and news and even tell jokes.  I’ve given a few of these to a few friends who also live alone and it’s changed their lives as they use it.  I have 9 units spread around the house (a video based Show in the bedroom, five Alexa Echos in bedrooms, an audio based Show in the kitchen, an Echo Dot on my balcony outdoors and even one in my car).  I can change music with a simple voice command whether it is an artist, album or playlist I call up. Pausing play to answer the phone is as easy as turning all the devices into a house intercom to make announcements.  I can also sync them all together to play the same music in all rooms. 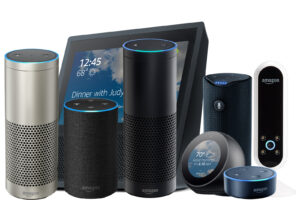 But the beauty of this extends to turning on and off remote lights, appliances, fans, air conditioners  and composing shopping lists by voice that display on my phone when I go out. I can see all my security cameras remotely as well as my camera equipped Ring doorbell.  Even if I am out of town, I can talk to anyone who approaches the house and record their actions at a push of a button.  I have smart locks on entry doors that can be triggered on and off remotely to let in a tradesman.  Smoke alarms and a carbon monoxide sensor are integrated into the system. Automatic watering systems are controlled by an app and changeable from afar.  They are all cost effective because they save me time from shopping efficiency to changing music tracks and albums. I can remotely turn on heaters in the bird feeding area while I am still in bed or click on the bedroom light from across the house to walk Jackson back to his night cage after dark. 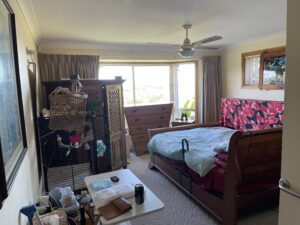 I live alone, high on a hill about a half mile from nearest neighbours.  A fall, faint, injury, another heart aberration or accident and I could be toast with no one to assist or save me.  I don’t have a medic alert button worn around my neck all day.  So that is why I rely on ‘Ask My Buddy’ voice activated emergency call system from my phone or any nearby Alexa device,  a personal alert network that I can talk to (AskMyBuddy.net).  All communications are through the Internet so I don’t have to use a hard wired phone.  All I have to do is shout near a device, giving it some keywords and it takes over contacting my friends. 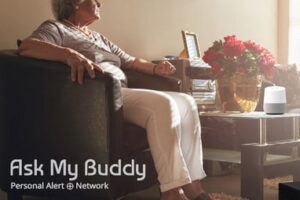 Here’s how it works: I’ve programmed in the names and phone numbers for 10 close friends and my private nurse.  Some live a few blocks away, others in Sydney like my lawyer who has the duty of unplugging me if I fade too far.  But I can alert them to a problem within seconds of the system picking up my commands and it will then call, text AND email up to ten people instantly no matter where in the world they are.  Or I can choose one or a few only that are nearest me. Once it gets the alert Ask My Buddy servers in the US call each number to play a prerecorded message outlining that I am having a problem and to please help or send aid.  It also instantly texts their phone at the same time it sends an email to that account.  All of these actions are done simultaneously and instantly at no cost. 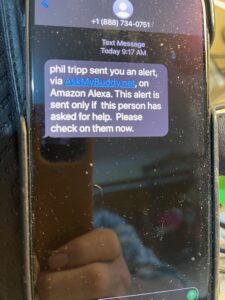 Instant texts sent out moments after yelling at Alexa

Here’s how effective it is.  I was showing an installer how the command system works and accidentally activated a call to seven contacts.  Within 15 seconds, I had a call checking in on me from my lawyer who happened to be skiing in Japan that day.  30 seconds later, my main buddy Darren close by called to check in, worried there was a problem and ready to roll.  Within minutes, I got calls and texts from the other five checking in on me.  It was embarrassing telling each how I’d accidentally triggered the system which won’t happen again.  But it is reassuring that it works in an emergency, costs nothing (other than donations), is always on and can bypass power outages because of my solar batteries.

At the very worst, I can summon help through my new AppleWatch6 by yelling at my wrist while down.  I’ve had Apple Watches in the past that I bought in the US which were enabled with AFIB (atrial fibrillation) heartbeat irregularity detection with an ECG app that was not then available in Australia.  But the new watch and software has that and a blood oxygen app in addition to high and low heart rate notifications.  And there is a sleep app that monitors sleeping trends and gives a report every morning.  Don’t get me started on exercise and wellness apps!

So while I am on my computerised recumbant exercise bicycle every dawn, racing against myself as the pastels start to erupt over the horizon oceanside down the hill, I can track my beats per minute as I pedal along warm inside the house.  With a set of Nuraphone noise cancelling synchronous wireless headphones amplifying the sounds of Little Feat, the Allman Brothers and The Grateful Dead, I am blessed to be living another day thanks to my tech support for body functions.  And my luck!

Posted on 6 July 2021 by Phil in Uncategorized