Last year I experienced the raw fish restaurant Da Poke Shack on Alii Drive outside the Kona Bali Kai hotel and was blown away by this place that features the marinated raw fish and crustacean dishes that are Hawaii’s national dish. 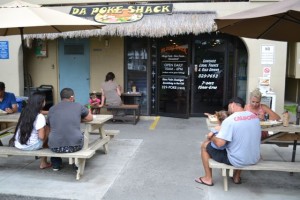 This year, there are two newies that I’ve discovered.  Umeke (75-143 Hualalai Rd Ste 104 (808) 329-3050) is an even better Poke and rice bowl shop by one of the original owners of the former who wanted to offer cooked food as well as a variety of raw fish marinated dishes.  It was stupendous—two scoops of sticky rice with seasoning and shoyu, seaweed salad and two types of ahi Poke—one sweet, one spicy—all for ten dollars.  The place was packed and rightly so. 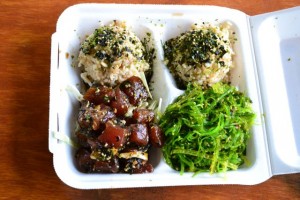 Sam Choy, noted local superchef, took me to He’e (74-5590 Palani Rd) which is another small operation in a shopping centre.  It’s based on the long-running restaurant Teshima’s up the road in Honalo and is similarly Japanese Hawaiian in genre without the drive.  Sam raved about it and for good reason.  Lip smacking fish, tempura and other dishes.

Lemongrass Bistro (75-5742 Kuakini Hwy  (808) 331-2708) is a hole in the wall Thai just a couple of doors up from Umeke and I wasn’t prepared for the intense flavours I got with an Oxtail and Fried Soft Shell Crab.  It ranked among the best Thai I’ve ever had and was cheap with great staff and a lovely ambiance.  They have all the standard curries, soups and noodle dishes you’d expect but a lot more too.

Rays On The Bay (78-128 Ehukai St (808) 930-4949) is the top end restaurant at the Sheraton Kona Resort and Spa at Keahou Bay and it’s just totally changed its direction and already killer menu towards a more sustainable, locally grown variety of ingredients.  The result is staggering.  First there is the view across the Pacific with manta rays doing loops in front of you with snorkelers and divers at night bobbing around them, A spacious, comfy venue is matched by the exquisite regional Hawaiian dishes.  As good as the gourmet ones in Waikoloa, just closer and more intimate!

Oh and speaking of Sam Choy.  His restaurant in Keauhou Bay overlooking the Pacific is still smokin’ and he has an annual Poke contest at the Sheraton  in late January/early February which you can see at http://www.samchoyskeauhoupokecontest.org

Posted on 23 August 2013 by Phil in Uncategorized