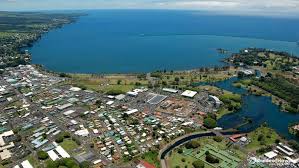 I like to start my sojourn in the islands of Hawaii in the wet spot.  Hilo is a sultry town that is occasionally bathed in sweat and buffeted by breezes, a sleepy burg of old streets, wooden storefronts, no strip malls of new brands and a lot of harbour and industry.  It has an airport with direct connections to Hoolulu but not a hugely active one except for the buzzing of helicopters which are like dragonflies of the air carrying overweight passengers to see the red glow of lave on the devastated flows of black cinders and ropey knots of dark rock.  Waterfalls abound as it is rainy a lot but only in short bursts.  It’s the damp side of the island where orchids grow, everything is a lurid shade of green and not much happens. 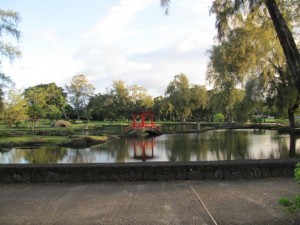 It hasn’t been a culinary hot spot over the years but there have been occasional highs.  One former Chinese restaurant occupied an old bank and was the hip place to be but closed.  It had a great Louisiana restaurant that moved to the gold course haven of Waikoloa and Cafe Pesto has managed to survive for 25 years or so.  But there is a new movement in town, like a rumbling of the earth that accompanies vulcanism and I’m here to find the Kama’aina Culinary Trail of this mini-city. 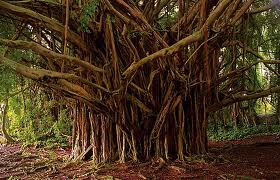 I started out today by doing my research.  Where a few years ago there was nothing much to recommend, it’s getting spoiled by choices.  My first try was Pineapples downtown but they are closed on Mondays so that left me with the Hilo Bay Cafe right on the water in a botanical park filled with banyan trees, exotic flowers and Japanese gardens.   It was a revelation and a pure joy.  http://hilobaycafe.com 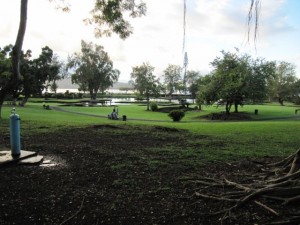 First a couple of shots of the sun setting over the bay and hills and then a berry margarita, frozen, which had just the right amount of tartness and citrus as well as being overpoured into a glass with the excess.  Brain freeze repeatedly.  There is a sushi bar with a huge variety of rolls and hand turned cones as well as a comfy bar with views across the bay.  I had a whirling dervish of a bartender, she was a joy to watch in  half ballet/half workout blend of motion making drinks.  My second drink was a citrus and tequila mix with cranberry juice and soda.  A perfect refresher for the muggy sunset time. 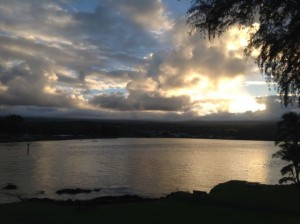 The great surprise was thin french fried potatoes, perfectly crisp and long accompanied by a salt and truffle mayonnaise instead of tomato sauce.  Terrific.  For only $7 a huge portion, hot and flavoursome.  Then followed a set of four ocean scallops prepared perfectly in a medium rare state with just the right mount of spice and salt with a creamy sauce imbuing the angel hair pasta with their scent and flavour.  Simple, perfect and just the right amount for dinner 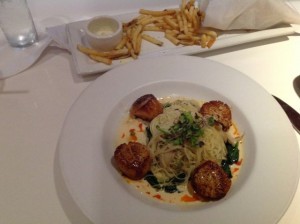 They have a blue cheese burger that is their signature dish, an array of salads, steaks and fish like any classy eatery in Hawaii.  But it’s the ambience of ‘pau hana’, “day over” and its exquisitely intimate decor that makes it more of a homey place than simply a restaurant;  5 out of 5 for me.  I had a nice chat with the manager and lavished praise on their staff, bartender and cooking, finding out from them a few new places to try out in my three days here, post hurricane.  Like New Orleans, they ain’t missed a beat. 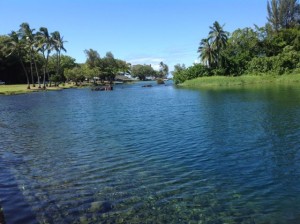 Coming back home, I realised what a superb hotel I had chosen over the concrete towers of tourism.  A simple ohana hotel run by a family here for decades (and in Maui as well as Kona), the Seaside Hotel is perched in a little niche of pools leading to the sea and bay with a fountain, a koi pond, walls covered tastefully in  Hawaiian quilts, gardens throughout the property that make it a little paradise and the friendliest staff you could ever imagine. 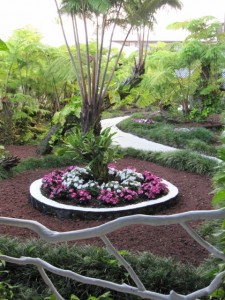 It’s such an immersion into local culture and the mana (magic) of ohana (family) as well as a charming and quaint property that is not like a soulless corporate battery hen run of rooms.  I’m content now.  Magically enraptured.  Tomorrow the volcano. 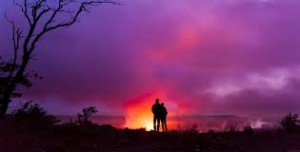 Posted on 19 August 2014 by Phil in Hawai'i, Uncategorized

← Mr Marvel Mavro
Full Moon in the Middle of a Day →