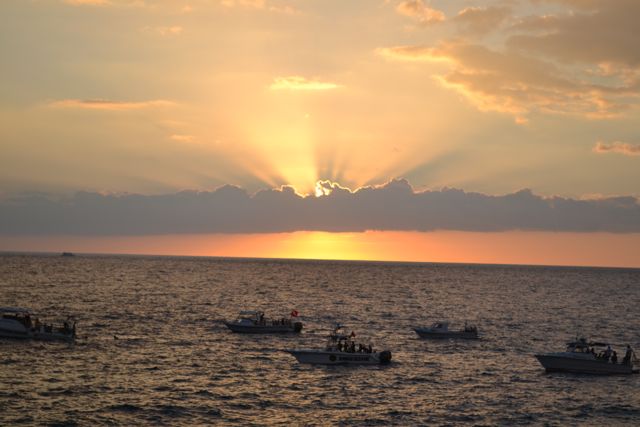 I used to be in one of these boats many times over the past 20 years that I was a dedicated scuba diver.  I saw many sunsets like this in a dusk dive before going back down an hour later to see up to 20 six to 12 foot wide graceful manta rays doing an underwater dance feeding on plankton as a circle of us sat in 40 foot waters either off the Sheraton Keauhou Hotel where I’m now staying or up by the airport where the Magic Manta spot also fills with them. 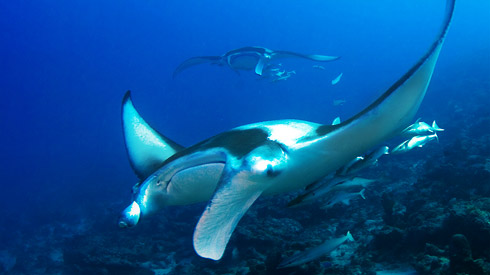 At up to 1200 pounds, they are prodigious feeders doing loops over the high intensity lamps anchored on the rocks that attract the schools of plankton at night, swooping and sieving through the clouds of tiny creatures as they do their nightly underwater hula.  They miss the heads of the submerged divers by inches but you can see their wide maws and eerie black eyes as they glide noiselessly over you with only the sounds of breaths and bubbles from you and your group for an hour or so. 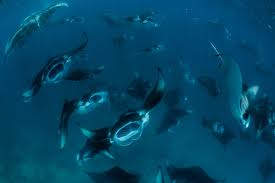 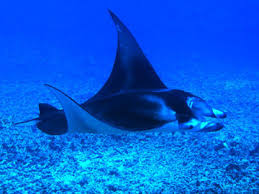 I’m on the surface tonight a couple hundred meters away from the action because I have been banned by my doctors from diving anymore.  I got my certification in Hawaii on Kauai 20 years ago by declaring no medical problems and not having to get a medical certificate as is the rule in Australia.  Since then, I’ve dived the Kona, Maui and Kauai reefs and deepwater, wrecks in the Florida Keys, kelp forests in New Zealand and many more special experiences in the watery world.  But no more.  I’ve been diagnosed with emphysema.  Tough luck but not fatal.  Besides, I’ve had my times blowing bubbles and for that I am grateful 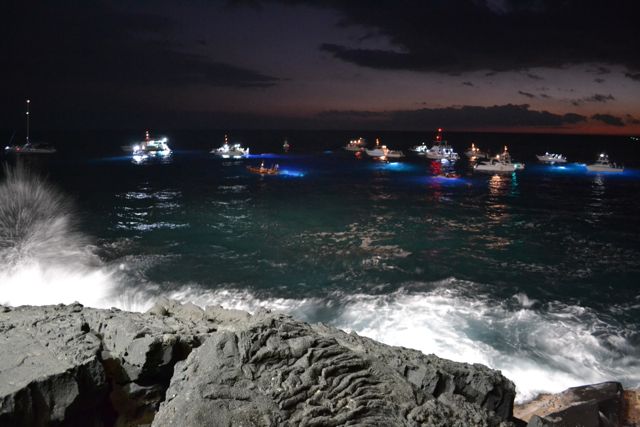 So as the boats glow from beyond the surf hitting the lava in front of Rays on the Bay restaurant, a different feeding frenzy and hula begins on shore. 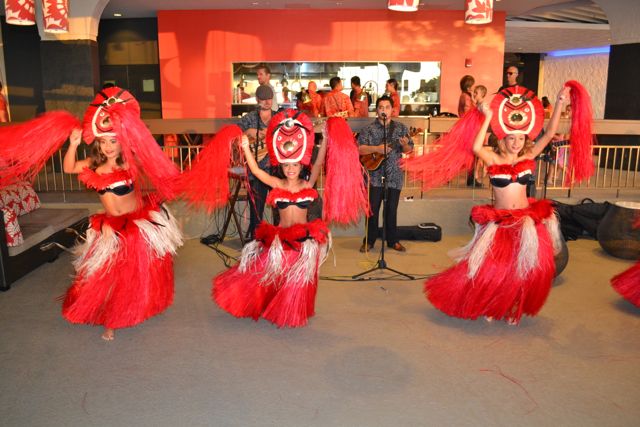 These are Tahitian costumes made for fast dancing rather than the languid slow hula of the native Hawaiians but still entertaining.’ 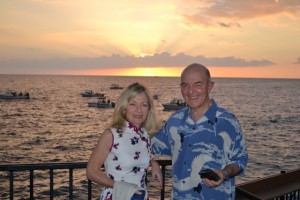 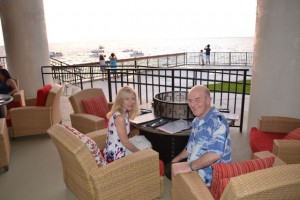 I’m here with this handsome couple, Brian Peacock and Jane Wexler who are longtime buddies and budding Hawaiiophiles on their second trip here together,  Last year we hung in Oahu, they went to Kauai and this year they are trying out the Big Island.  So by the fire pit round table centre stage to the setting sun light show, we begin the degustation. 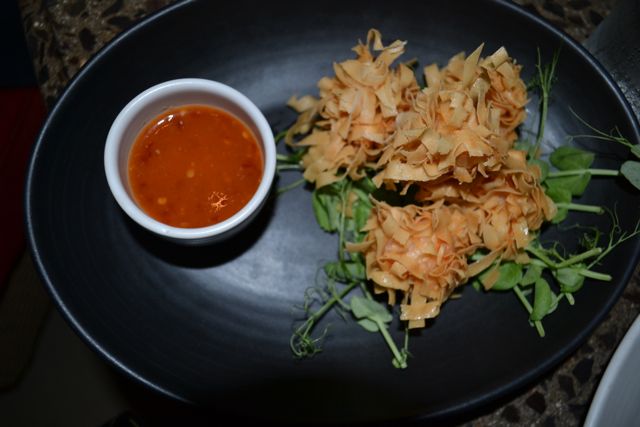 First up, the Kona Spider Roll which is simply prawn pieces wrapped in noodles and fried with a sweet chill dipping sauce. 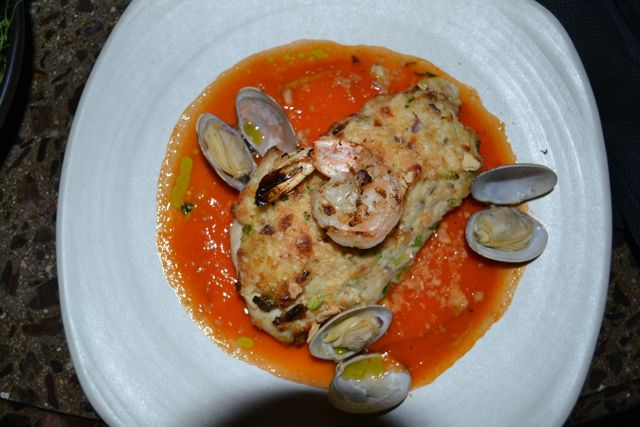 I opt for the ono fish with a crab crust in a cioppino sauce which is an enticing gumbo of flavour. 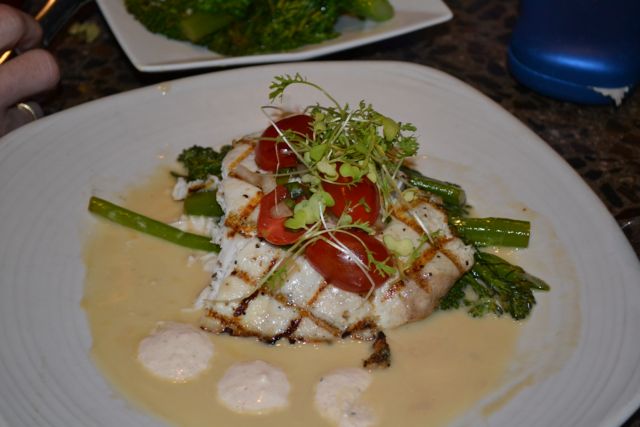 Jane and Brian battle the mahi-mahi special which is bathed in a buttery lemon and basil sauce underlined by asparagus.

At this point, after a long day coffee tasting, shopping, a 90 minute massage, more shopping, shipping and picking them up to start their stay, it’s time for Bonzo to slide between the sheets, so I left them with their privacy, desserts and canoodling under the stars and over the lights. 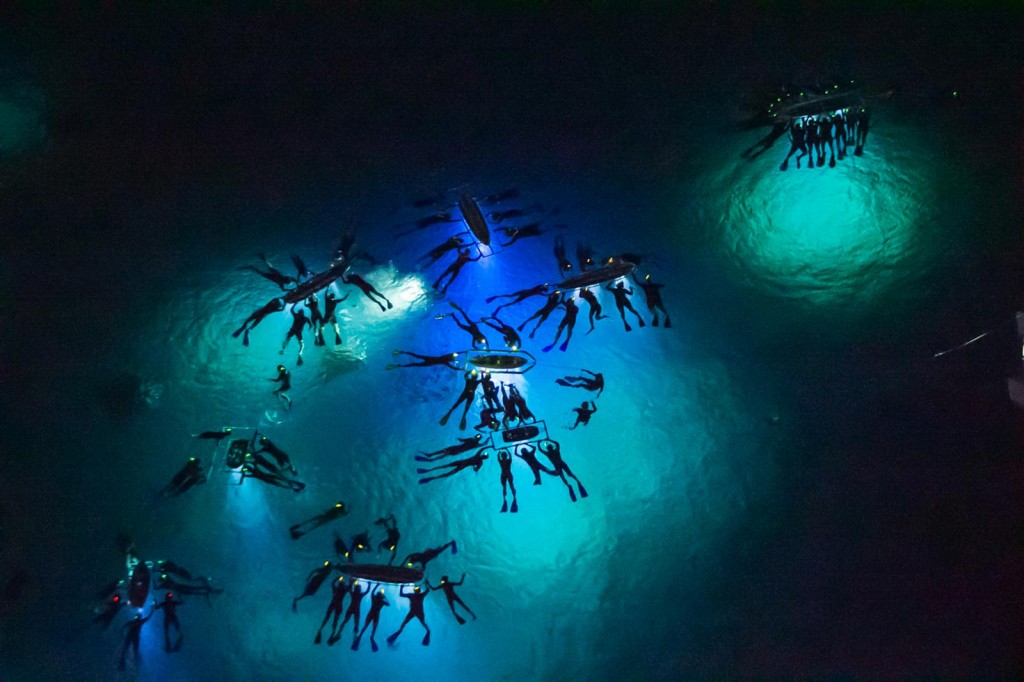