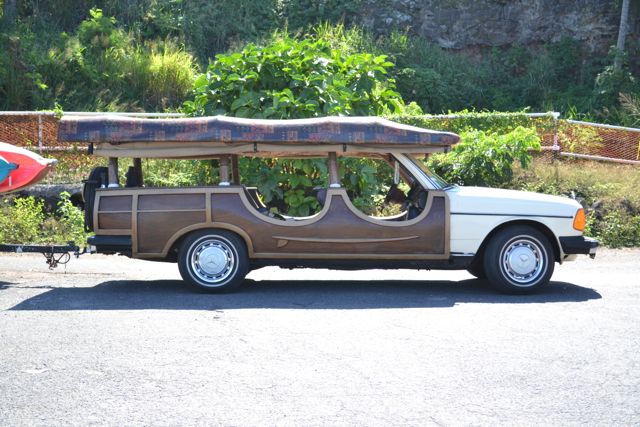 A day on the Big Island is like an OD of sunshine and tropical breezes saturated by floral scents. Just makes you want to hop into your ride and cruise the lava fields, coffee plantations and shorelines. So that’s what we did, not in this faux-woody beach cruiser made out of a Mercedes, but in our standard rent-a-ride with loud music. 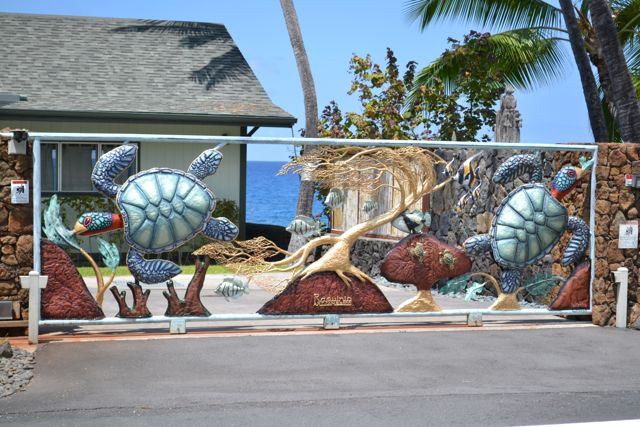 We first roll past this gate that I have had my eyes on for over a decade to reproduce by the artist and bring back to Coffs Harbour as the centrepiece to my Apocalypse Fence. It would fascinate the zombies as I pick them off one by one from the balcony, mojito in hand.

The work is immaculate and the detail is stunning. It has not corroded and absolutely glows in the morning sun. 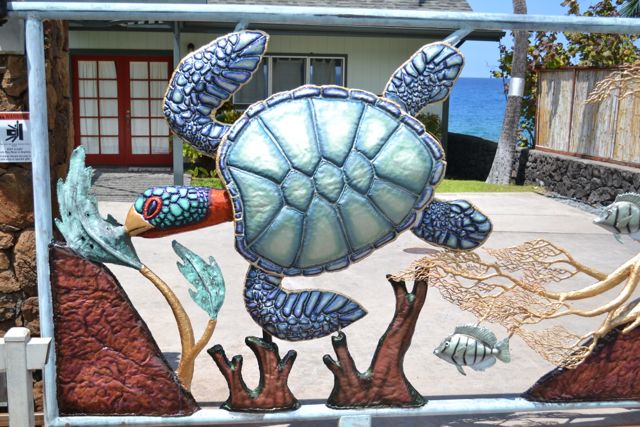 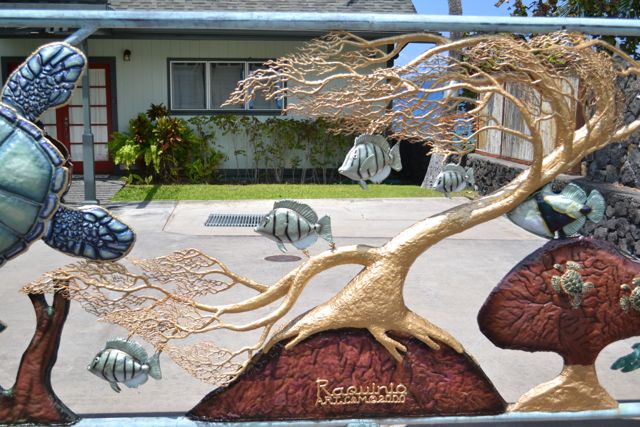 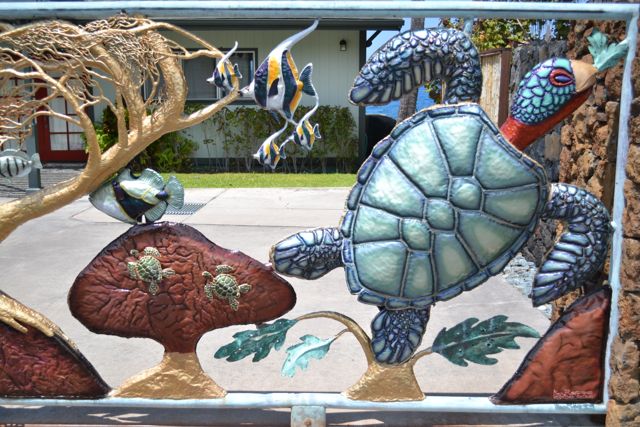 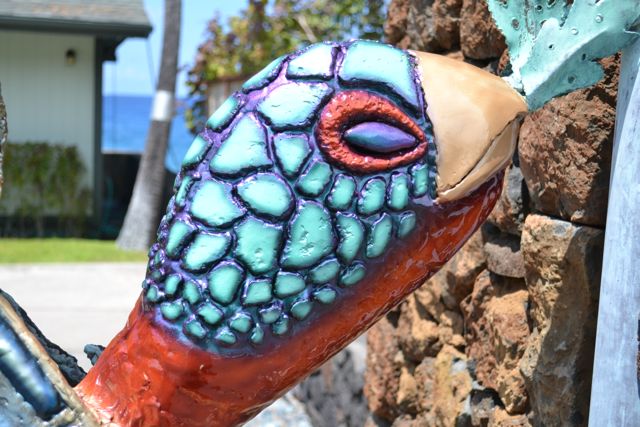 But it’s time to meander up the coast which is now bereft of the unique coral graffiti which once adorned the roadside with messages made from white rocks but now collected and dumped to keep the shoulders uniformly black. 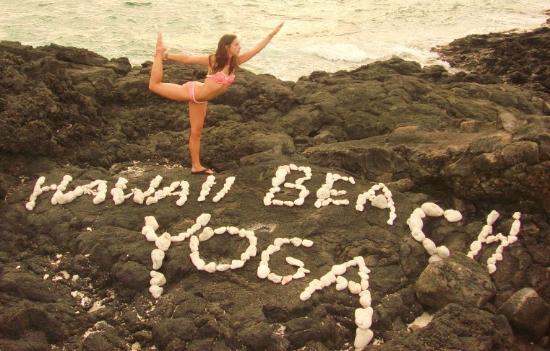 But we are heading for a secluded little dive in Waikoloa called LavaLava Cafe–a sunny place for shady people–with great drinks like my coco mojito and wondrous salads. We’re going to need to stay lean for the Clambake ahead at Mauna Kea Beach Hotel. 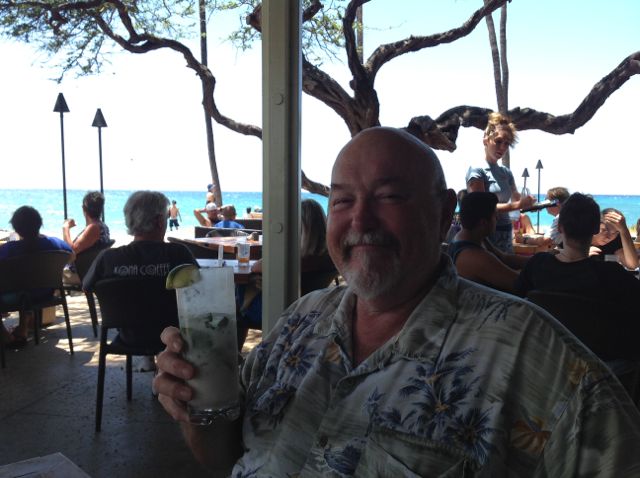 We find the resting spot and immerse ourselves in the vibe. LavaLava is a newish upmarket on-beack eatery but there are also cottages hidden among the palms along the strand for a lovely lush stay. 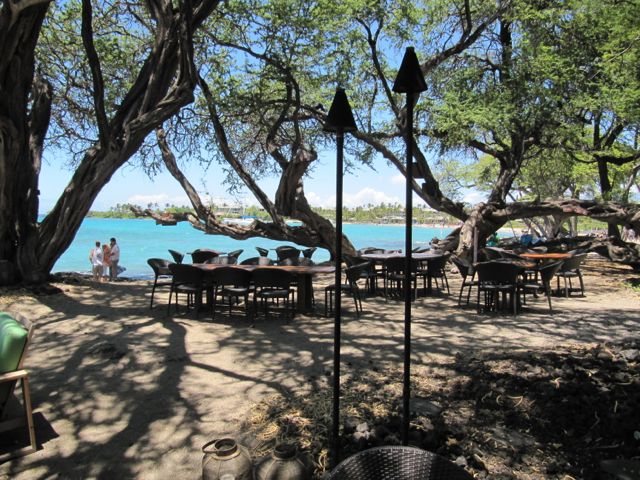 Soon enough we’re on our way to Kawaihae where Jane and Brian decide to trek the holy Heiau where bloody wars took place. Me, I decided to take a nap in the coolth of the car. Good move… 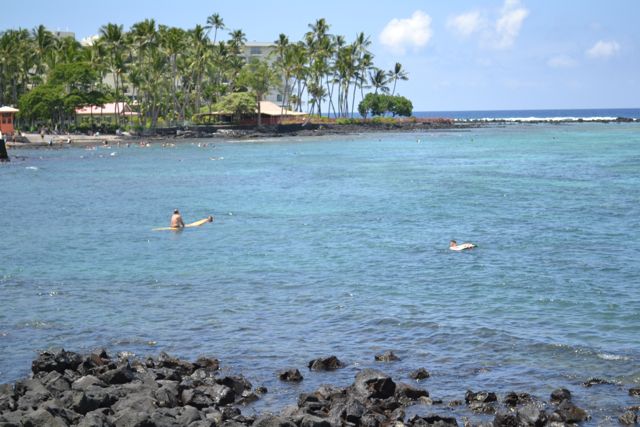 After a refreshing half hour bounce in the surf of Hapuna Beach under the Mauna Kea Beach Hotel–which was the first built on this Isle by John David Rockefeller–it’s time to tuck into the Clambake which features all you can eat Maine Lobsters, Dungeness garlic crab, shellfish galore, a bounty of fish and prime rib. I’ve had the good fortune to stay at this outstanding resort and its sister property–The Hapuna Prince–several times including being ‘stuck’ there over 9/11 and I’ve experienced the Clambake on many Saturday nights. But this was the best of all, due in no small part to the new Chef, Hans Lentz who is German but has honed his skills from five-stars around the world including Tahiti, Chicago, Dubai and many more. Not only is he a great cook, he is a humble yet fascinating raconteur who was still bubbly despite having led his crew in the annual Poke (raw fish dish) contest just down the road earlier that day. 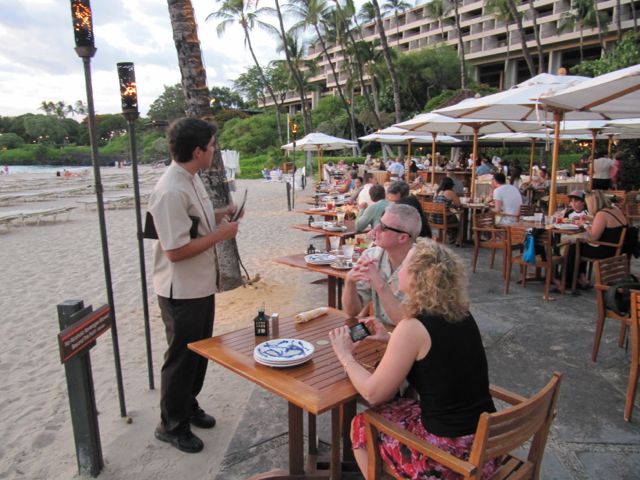 Bang on six pm the queues start as the crowd surveys the tables filled with fresh crustaceans and sashimi to elaborate desserts and an ice cream bar. The opener ruby red ahi tuna sashimi is laid out on ice along with a mound of oysters, and a pod of prawns with Dyson fans between them keeping the flies off and circulating the cold air. A great use for this invention. 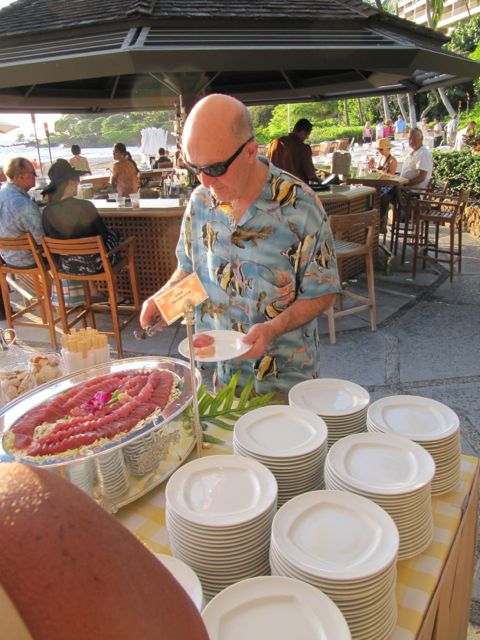 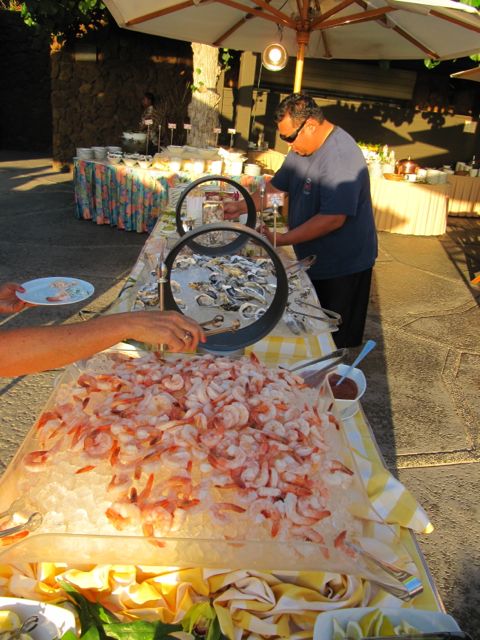 The main attraction of this decades-old Saturday night event right at the edge of the sands is the Maine Lobster which used to be imported as a rare delicacy from the chilly waters off New England in the upper East Coast of America. Now however they are grown in a lobster farm in Kona, fed by nutrient-rich cold waters pumped up from the depths off the narrow shelf of the deep ocean. That facility also grows goo seaweed which is a crunchy type, kingfish, abalone and much more as well as serving as an energy laboratory. 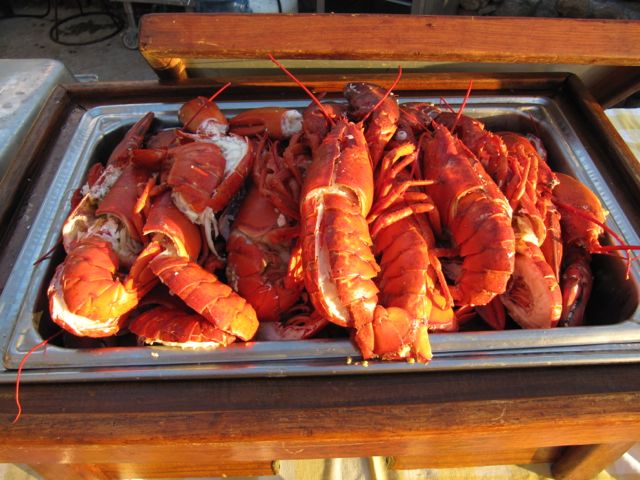 But it wasn’t just the allure of crustaceans and great company that made the evening, we were also treated to a great guitarist who segued from hula hits and Hawaiian standards as the sun slowly fell to the horizon, into tasty smooth jazz and up temp guitarisma stylings capping off with an amazing version of Sleepwalk that went long into the night as the skies went from pastels to deep black starry ink. 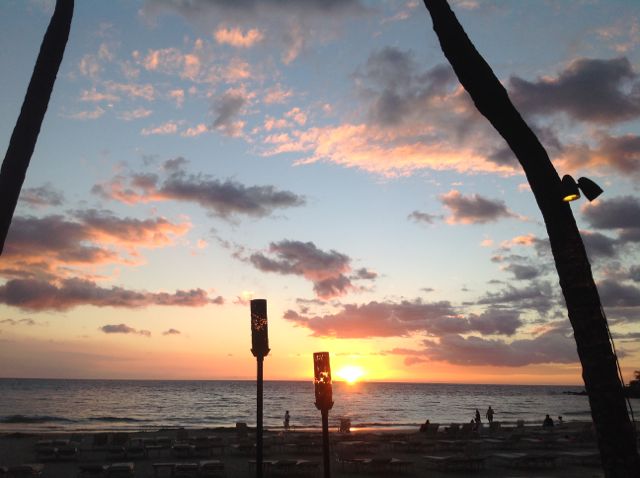