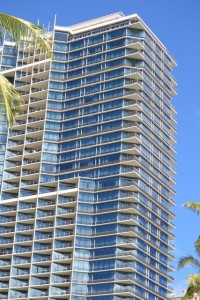 There you have it, a ground’s eye view of the glass-sided Trump Hotel Waikiki where in one of the front facing corner suites, it’s all happening.  One of the property’s catch cries is “Discover a New You, You Never Knew Existed”.  I have.   I’m a prisoner of luxury

In my second day of being held hostage to the Luxe Life, I could get used to this.”Welcome to a Lifestyle of Privilege” reads the other card in the marketing deck that came with my keys.  There seems to be no way to escape it.

Twenty stories up, crawling on plush, soft, cream coloured carpeting, travel writer Phil Tripp is gathering up change dropped on the floor, knowing he’s going to have to have quarters for the unrelenting parking meters and unforgiving rangers.

He’s already gone to the KCC Farmers Market for sustenance from the growers and producers, packing his bag with Aikane K’au Coffee beans for the caffeine hit, sliding a pair of organic sausages into his bag and rehydrating with pineapple coconut juice–fresh squeezed and untainted by the demon rum.  Oh and salad, fresh organic salad.   Because he has a full kitchen in his cell-suite.  And four bottles of pinot, just in case. 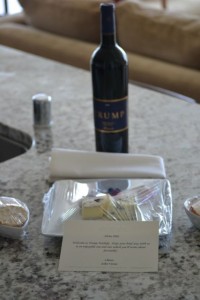 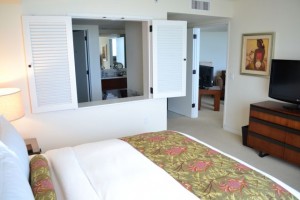 With only four days to go, he’s got two loads of laundry spinning around in the suite and maids are rearranging his life so
everything is orderly when he returns.  Unbeknownst to him, a plate of blue cheese, strawberries and a bottle of Trump blended red has been secreted into his kitchen and is now awaiting his return.  It’s a tough life.

I’ve discovered Trump as a new brand, but Uber.  It’s not a Westin, Hyatt or St Regis–those are old school.  Not as downmarket as a Hilton or Sheraton and definitely not boutique.   The midmarket Aqua, Outrigger, Marriot and Castle ‘resorts’ quiver in smallness next to Trump.  So many aspects of this property scream Donald!, but with style, not comedy. 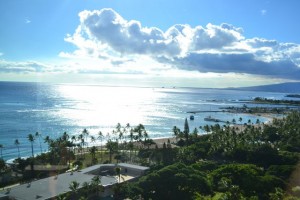 I’ve already had to endure the glassless shower with the high torque water jet. If that’s water boarding, more please.  It’s such a large bathroom, it seems to have an echo.  But I am alone.  Luxuriating in the massive Turkish towels I line up my ablution weaponry–skull shaver, ear and nose trimmer, beard-whacker, sonic toothbrush, oral irrigator and an array of nail clippers.  You can’t be too prepared.  And at Trump, you better look good.   Well, at least as good as Big Dog board shorts and a vintage Tommy Bahama aloha shirt can make you.  I have a pair of long dark pants just in case.  And a suit jacket too for camouflage with a black shirt. 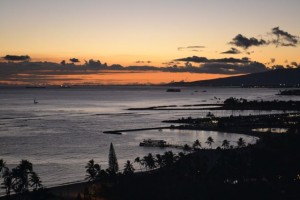 Oils and unguents are slathered on from Clinique Healer for shaving, Ola body lotion and prescription anti-fungal creme (yes it is hot and muggy out there).  A squirt of Thierry Mugler’s Amen pimp juice and a schmear of deodorant signals the end. Time to rock out of here and do some shopping.  And some lunch.   Trump is so smooth, I don’t have to give my parking ticket number, they already know.  An icy bottle of spring water is handed to me on leaving the flight deck and it’s into the fray of rental cars, Asian drivers, hot babes sizzling on the sidewalk well-oiled, tanned and flicking their long locks. 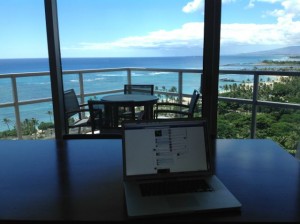 It’s a seamless experience here.   They have diapers prepacked for Japanese babies so they don’t go when they go in the pool, I fund three sets of four ear tips packed in sterile transparent metallic pods and every surface glistens.  The only thing that disappointed me for a moment was finding out that The Donald does not own this building.  As a marketing genius, he franchised his name to this and several other Trump properties without having the financial worries of keeping hotels packed, earning from the use of his brand and reputational allure alone. 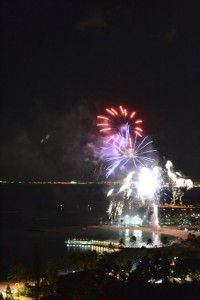 Now that’s smart!  I don’t think Gina Hancock or Rupert Murdoch could pull that off.  I promise I’ll never joke about Donald’s hair style again.  I’ll just watch the fireworks from my balcony with a bottle of Fess Parker instead.

Posted on 8 September 2013 by Phil in Uncategorized

← Early Morning Dribbling Down my Chin
Another Night of Grazing →