Greetings From The Pre-Apocalyptic Cocoon 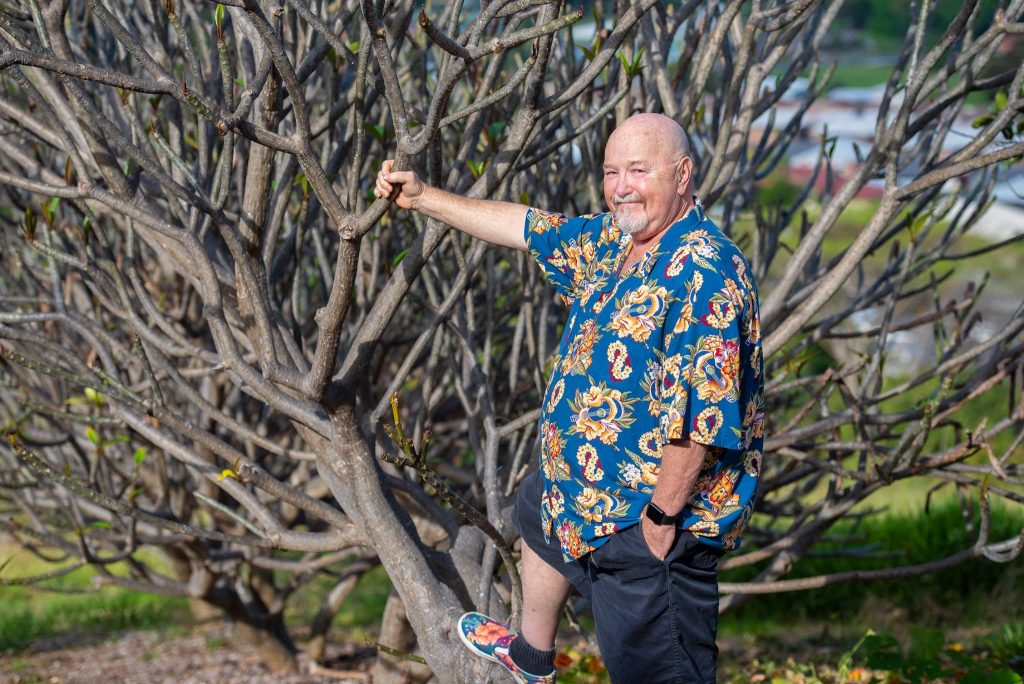 The frangipanis (plumeria in Hawaii) are just getting ready to burst forth with blooms, foliage and delicate perfume here on The Hill.

Most view the new COVID world order as a torture or gross inconvenience.  I see it as a great opportunity to change and enhance my life in the natural cocoon I’ve developed up here on The Hill–500 metres from the nearest street on a steep uphill grade keeping the religious conversion squads away.  And I am high enough and far enough away from my nearest neighbour so I can play music all day at ’11’.  Video cameras amply cover the property so I am alerted whenever anyone on foot or in vehicle approaches.  With two solar systems and two Tesla batteries, I am energy self sufficient and with two massive water tanks as well as town water, irrigation is legal and easy being gravity fed over the two acres of land. 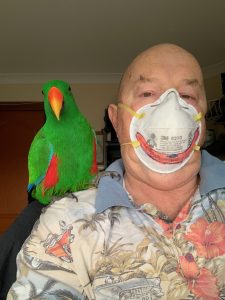 The Jacko and The Joker, masked up for the plague.

Two weeks ago, September 1 2020, I slit the umbilical cord that held me to Facebook like a bad cigarette habit and am now metaphorically free-floating in space just above my high altitude hilltop cocoon in Coffs Harbour NSW Australia. What that simply means is that those who want to stay in touch, peer morbidly into my increasingly idyllic life or have a perve on the photo library of the interesting times we are forced to live in within country Australia will now have to commit themselves to using this blogspot that I will regularly update at least monthly. No more social drama and zeitgeist, having chopped off Instagram, Twitter, Linked In and any other feeds.  Now it’s just me and The Parrot as well as a wildly laughing Kookaburra who splits off from his nearby cackling consorts to beg a meaty or fishy snack on the balcomy rail. 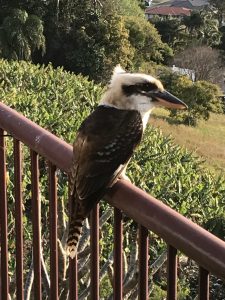 What’re you laughing at? 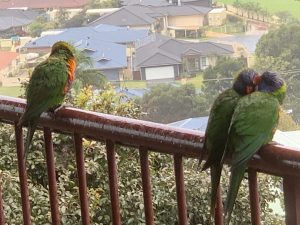 Lovin Lorikeets in the rain

The wildlife here is really happy with the sanctuary I’ve evolved.  Native shrubs and brushes for the birds and small mammals, lots of variety for their eating and timing of seasons with spring just erupting now.  The rich palette of birdlife has returned now and raise a multilingual racket of squawks, chirps, songs, whistles and hoots. 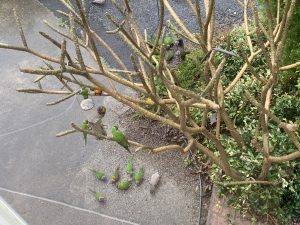 I’ve a family of ten King Parots which have grown over the decade, a murder of crows (about 20 huge ones), maybe 100 Rainbow Lorikeets who chatter most of the day, pheasants, doves, hawks, a pair of sea eagles with their newest kid and honeyeaters galore.

And then there are the loud black cockatoos with their yellow tails and spotted heads, resting, roosting and raising hell in the macadamia tree that houses a native bee colony.  Thebirds were especially happy with the opening of feral cat season early with the first capture on opening day. 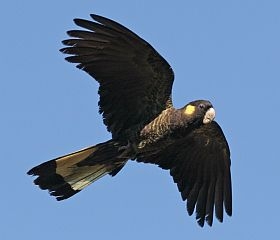 A yellow tail black cockatoo part of a family in my macadamia tree. 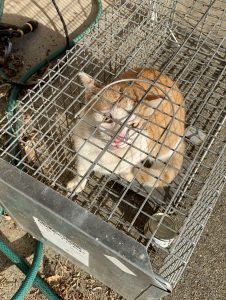 They were loudly applauding the scenario of the cat in the trap up until it was quickly submerged in a full wheelie bin of water which rattled for about ten seconds as the moggie expired. Then all went quiet, almost out of respect for about five minutes until the birds rebooted their calls.  If you think this is cruel, you haven’t lived on the land and up here we take our predators seriously.  Cats are the only animal I will readily kill, always checking if they are collared or belled first.  Only then would I take them to the RSPCA to have a microchip read to determine the owner.  I don’t do that for uncollared or unIDed cats because the one time I did about eight years ago, they called the owner of record, a woman down the hill who had ‘lost’ the feline three years prior and upon getting it back, let it go outside again and it ended up in the trap a couple of nights later.

My new feral cat warning for other felines below the sign that humans can read not welcoming them.

I won’t harm the many goannas who call The Hill home.  The smallest is about a metre long, the largest Momma is close to three metres.  I feed a few of them with the occasional egg that they play with in a round dish like a soccer ball until they destroy and devour.  Like this playful junior…

The few dozen pythons are welcome to slither around, the smallest about a meter, the largest, Petula at five metres for about ten years living in the roof cavity and happily sunning herself on the front stairs in the morning.  The reason I know her length is I noted the steps where she lay and when she moved off I measured from point to point.  There would be about a dozen carpet pythons that have come from Petula when I discovered her with a clutch of eggs under a pallet covered by cardboard about 12 years ago.    Most of them are about a metre or so long, a few two metres and at least one three metres.  And there are also some poisonous snakes to watch out for like browns, red bellied black and Clarence Valley rough snakes.  I don’t mess with them but have played with Petula who is quite affectionate and curious. 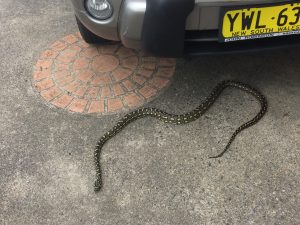 A 1.5 metre carpet python coming out from under the car to greet me.

There is a family of echidnas (spiky little anteater-like mammals) and a colony of about 40 koalas in the eucalypts just up the Hill who will start their nightime ritual of grunting during mating as the days warm.  The first cicadas and frogs are starting their sunset symphony and the school of fruit bats have returned in their thousands just cruising at dusk and dawn over the house. 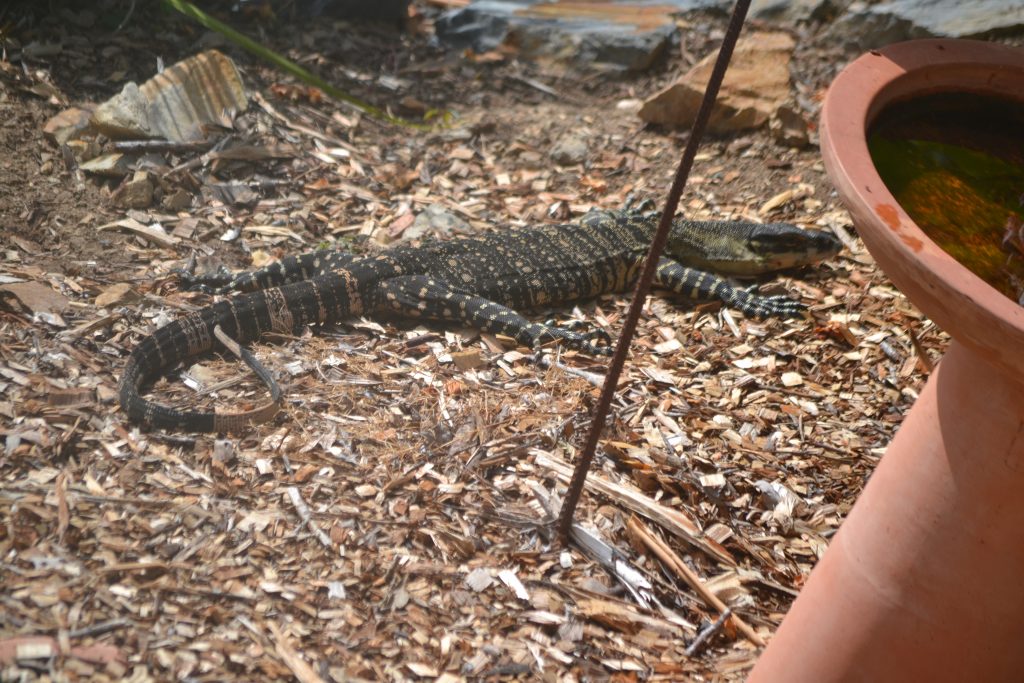 Big Mamma Goanna sunning in the yard when she was only two metres long, now three. 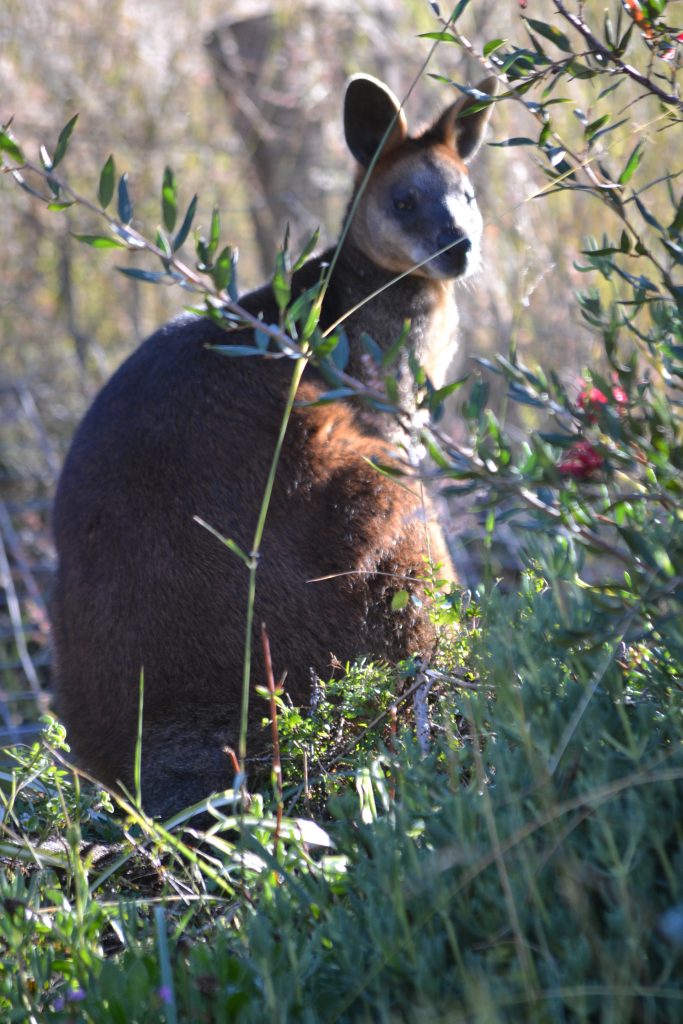 A mother wallaby with a small joey in her pouch just nibbling outside my lounge.

The mini farm is producing a variety of harvests.  Parsley of the continental and curly varieties run riot leading to serious tabouleh feeds along with a bounty of spring inions and baby tomatoes.  Though they’ve been wintering the last two months, chilli peppers are back having had a spectacular year so far.  The oddest new fruit to come up was a horned cucumber melon with sharp spikes but a sweet centre of pulp for Jacko.  And the best surprise was the re-emergence of previously rooted Jerusalem Artichokes which yielded 4 kilos of the fart inducing potato-like tubers that were a delight to fix but tooty to pass. 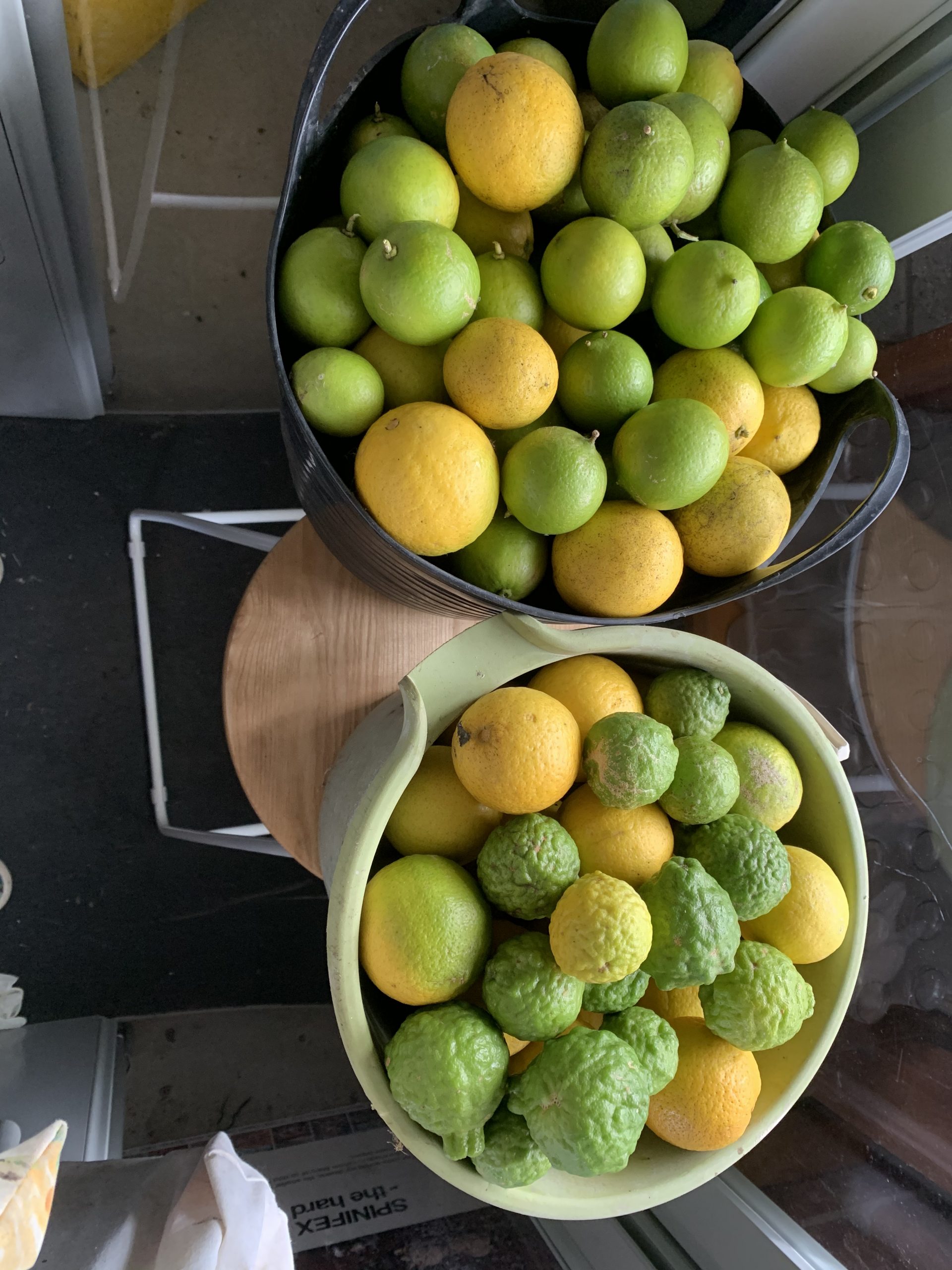 Margarita season is in full swing. The green one are actually unripe limes still sold at a higher perceived value. The yellow ones are fully ripe limes, not lemons while the wrinkly green ones are kaffir limes, a delicacy.

As you see the citrus are reaching their peak now at the end of winter with the limes being juiced into one cup ziplock bags for frozen daiquiris, margaritas and mojitos.  Kaffir limes are juiced too but their small amount of liquid is used sparsely for its exquisite flavoring.  I’ve got a sole Valencia orange tree that puts out enough to see me through the winter and the ten passionfruit vines snaking around the house have crescendoed into a first season of hundreds,  too much for one bird fresh every day but frozen away now for the off season. 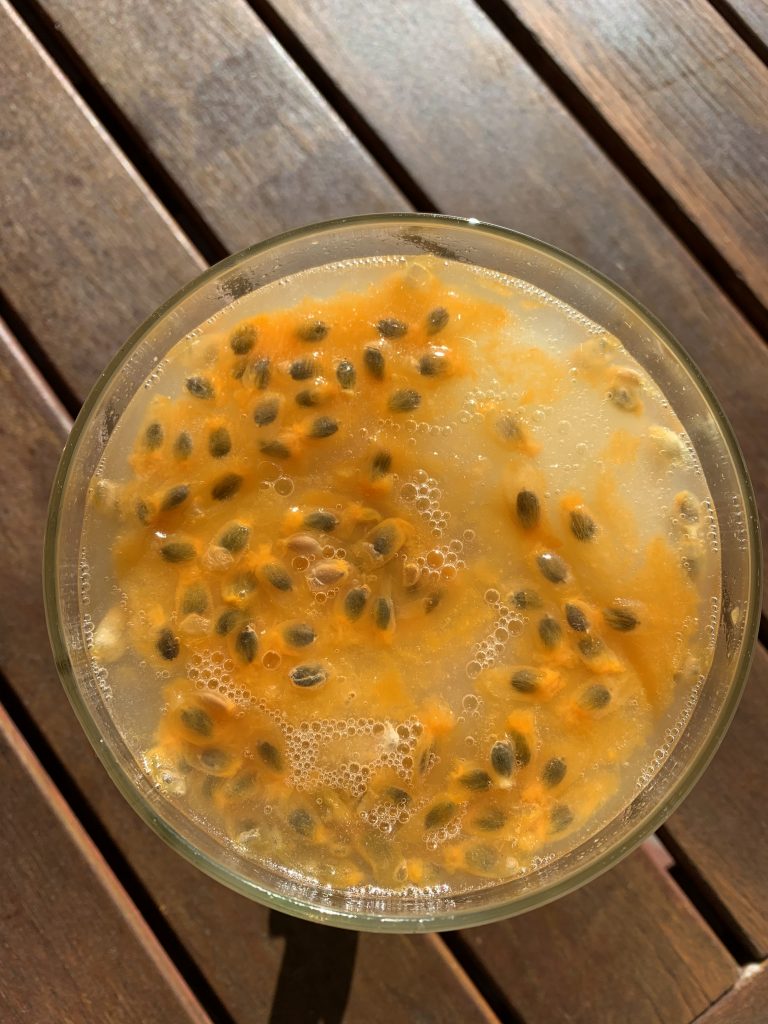 A lilikoi margarita as it’s called in Hawaii. 1.5 oz of tequila, 1 oz of Cointreau and 1 oz of lime juice with a couple of passionfruit squeezed in.

With the annual restocking of the wine cellar with pinot noirs galore, rose champagnes for my 70th ‘birthday week’ and a new season of The Musician shiraz cabernets to age, I’ll get through this pandemic if we’re locked down again. Building the wine cellar was  an important early addition to the house as was the two solar systems and dual Tesla batteries.  The bluestone paved cool cellar  has also served as a distillery for my white wine vinegar production.  It’s also where the store of Kona coffee is stashed in a cooler bin.  I’ve even grown mushrooms down here! 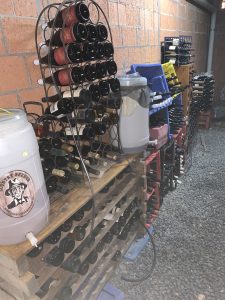 Toilet paper is virtually a thing of the past with the procurement and easy install of the Japanese Toto Washlet bidet–a luxury I had to have not because of bog roll shortages but rather the elegant warm water and heated seat with warm air dryer solution to scrunch or roll options of Kleenex.  It opens automatically as you approach with a mist of e-water cleaning the bowl, you’re greeted by a constantly warmed seat and after the stream and dryer do their work, it’s automatically cleaned and sanitised before the top comes down again by itself.  Jackson discovered the foot warming nirvana when flying around the bathroom after a shower and alighting on the seat. 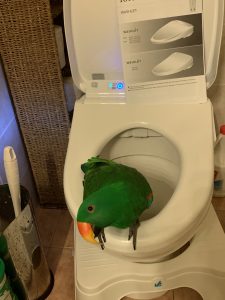 Jackson thinks the Toto Waterlet Bidet is a new bird shower just for him!

Another clip of a little beauty of technology.  if I’m shopping and some old fart with no social distancing skills starts breathing down my neck or sidles up next to me, I simply press the button on my iPhone in a cloth bag connected to the Bose bluetooth speaker.  A four second hacking tubercular cough I recorded earlier bursts out which is too short for the human ear to zoom in on in terms of position, but is LOUD!  Meanwhile I’m holding a water bottle up to my lips and miimicking drinking while the Kmart shoppers scatter from any other closeby human.  No need to confront the sidler or get into a senseless distance or mask argument.  And no one can tell it’s coming from me!  “Cleanup in aisle 4…” 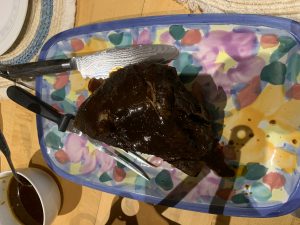 In the end, it’s all about the Brisket. And good friends… 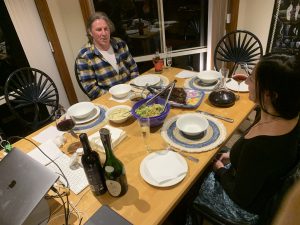 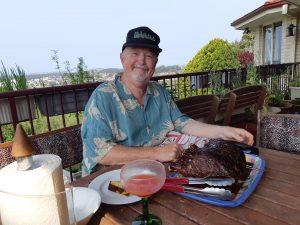 Until we MEAT again…