Maui Munches On Where the World Comes to Play! Ka’anapali Fresh on the Beach 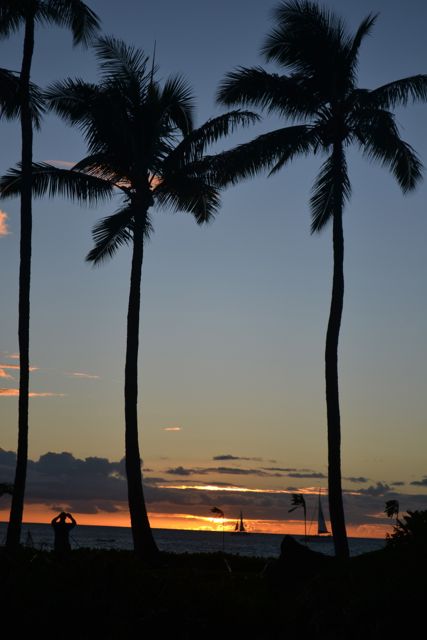 It’s the third year of the three-day Ka’anapali Fresh Culinary Experience which I have thrice had the good fortune to attend at one of the best beaches in the world.  Ka’anapali Beach–Where The World Comes to Play–is also where it comes to eat along three miles of golden sand with a master planned resort of several top brand hotels.  Hosted by the Ka’anapali Beach Resort Association, it is staged with a few dozen local and international chefs paired with local farmers and produce at Hyatt Regency, Westin, Sheraton Maui and Royal Lahaina resorts.

A dozen winemakers, craft beer artisan and spirits producers are also featured with an afternoon class on mixology a highlight of the many seminars and special events run during the days.  Tours are available for local farms and providers–my favourite being the hang I had with Shay Smith of the divine Ocean Vodka and Kimo Falkner who runs Ka’anapali Coffee.  And in the middle is a Farmers Market early Saturday morning where you get to sample the best produce Maui has to offer.

Each year it gets better.  Kicking off with a Friday night feast of Old Hawai’i dishes, foods from the Golden Era, Modern Hawai’i concoctions and Ka’anapali Style Desserts, we have a dozen great local chefs all shining in the sun as the arrival of a flotilla of outrigger canoes leads the double hulled sailing canoes onto the beach in front of the Westin. It’s the start of a culinary journey that follows the evolutions of dining in Hawai’i where the spiritual meets the physical plane in the exchange of gifts from the waters to the fields–from Mauka to Makai–ocean to mountains. 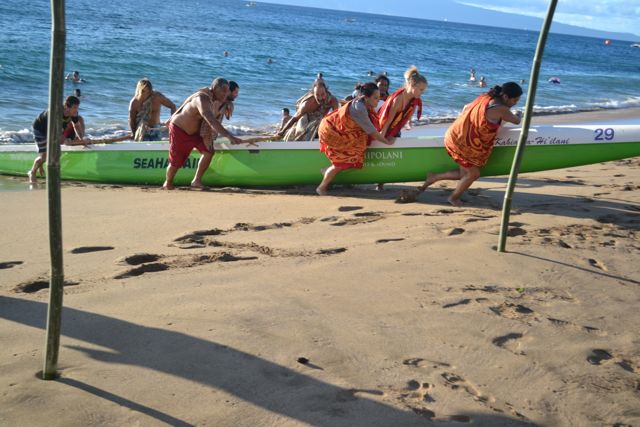 Aha’aina O Ka’anapali is the name and it is a voyage of taste explorations as you discover the clean natural flavours of fish, limi and sweet potatoes from old Hawaii; the savoury farm-raised beef, pork and sweet golden pineapple while sipping a designer cocktail honouring the Golden Age. 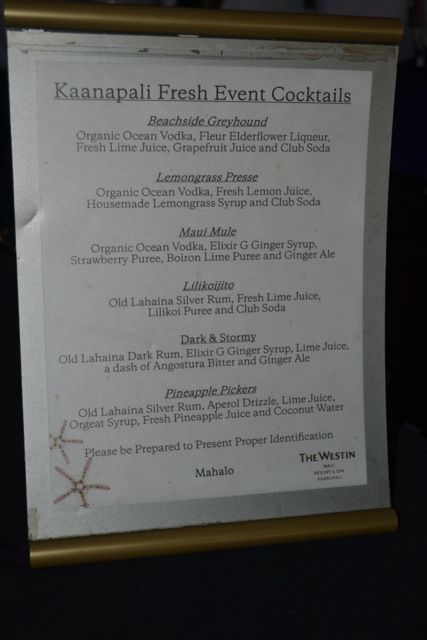 Then to the modern era where Hawaii’i Regional Cuisine indulges the senses with an innovative combination of cultures and exotic seasonings in the new wave of culinary tourism.   All this being fed with servings of Hawaiian music from the traditional with hula to more modern stylings with a rhythmic beat to falsetto and napa-haole tunes as well as current hits. 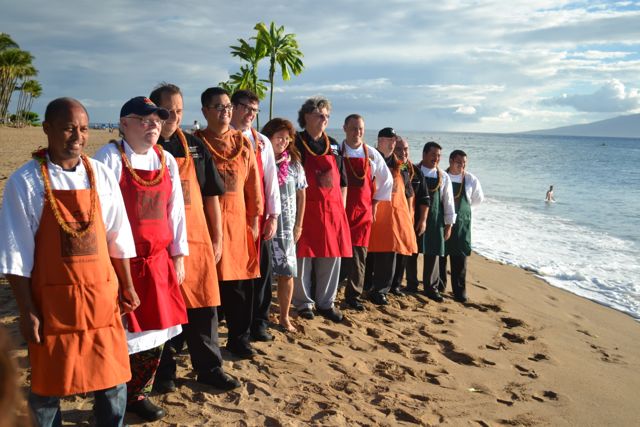 So here are some of the highlights of this year’s Feast for The Senses.  It begins with a boatload of poi, sweet potatoes, Pohole Fern Salad, raw crab and fish poke. 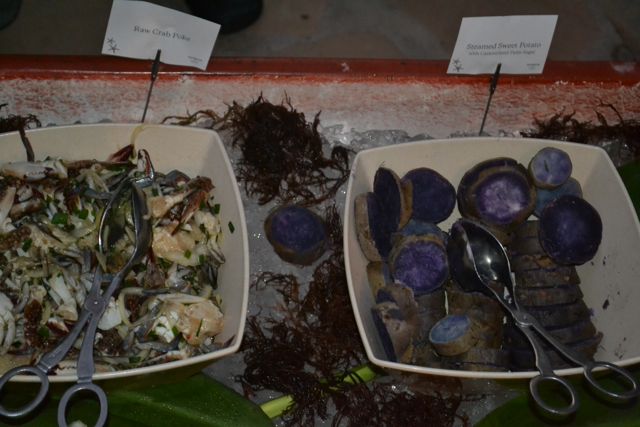 The local Hula Grill features Breadfruit Gnocchi with Pastrami Cured Short Ribs and a Grilled Pineapple Gremolata.  The perfect way to start The Golden Era, the dish practically glows as a tussle of sweet and  savoury evolves. 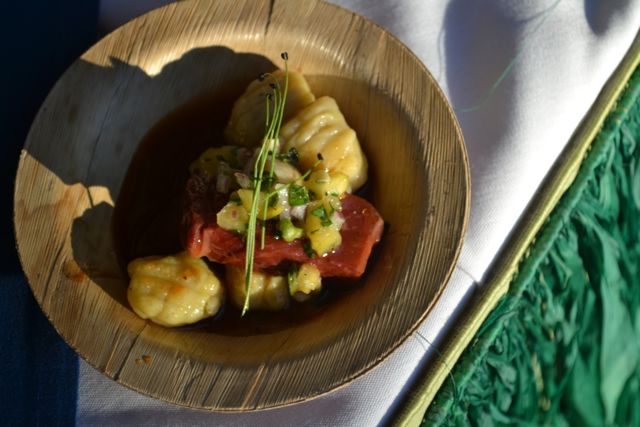 A Kona Kampachi Poisson Cru fish dish is served over Coconut Fried Rice in a Won Ton Shell over Sweet Poi.  It’s another clash of flavours but one that is resolved in a melding of oral joys.  This one’s a hit from Tom Muromoto of Ka’anapali Beach Hotel. 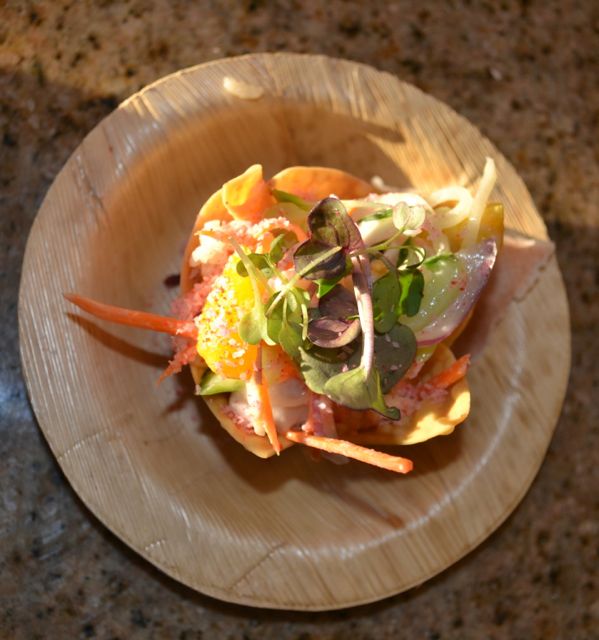 Local restaurant Leilani on the Beach features Malama Farms Pork Lau Lau (wrapped in banana leaves and steamed with spice) accompanied by a Poha Berry Mustard with a bit of zing. 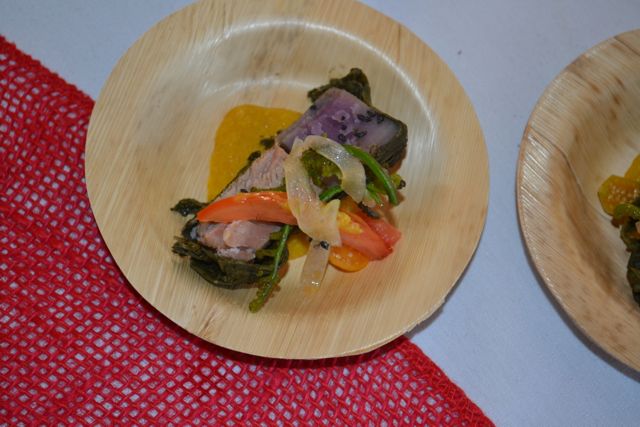 Banana Coconut Curried Mahi Mahi fish on Mint Parsley Cous Cous with Banana Mango Chutney is the complex contribution from Maui Fish and Pasta and it’s a hit with the crowds as they queue for seconds. 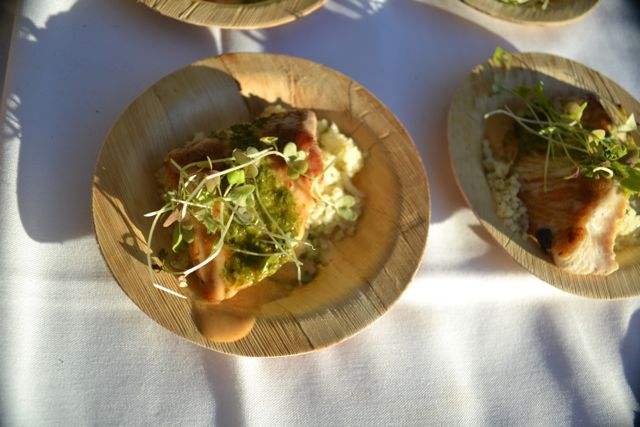 My favourite though from the Golden Era is the Ginger Cured Hamachi fish with Sweet Potato Chili Pepper Brioche, Pickled Plum, Mustard Cabbage and a Lemoncello Crème created by Ikaika Manaku of the hosting Westin Maui Resort and Spa.  It was loaded with flavours each cascading over the mellow fish yet not taking anything away from it. 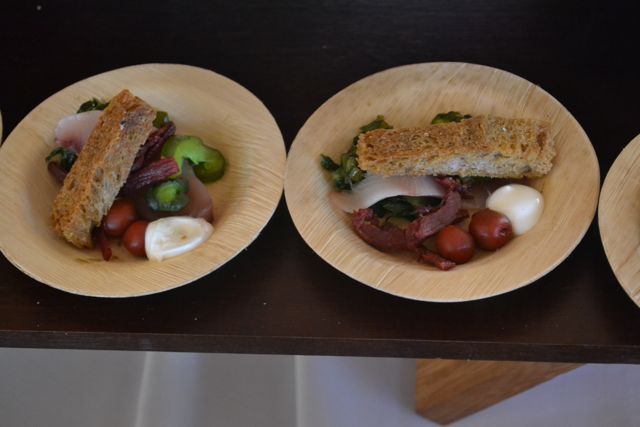 Modern Hawaii started with a Green Banana and Pork Pasteles which is a Puerto Rican dish by way of the Philippiines.   Simple, yet the synergy of pork and green banana made an intriguing flavor profile. 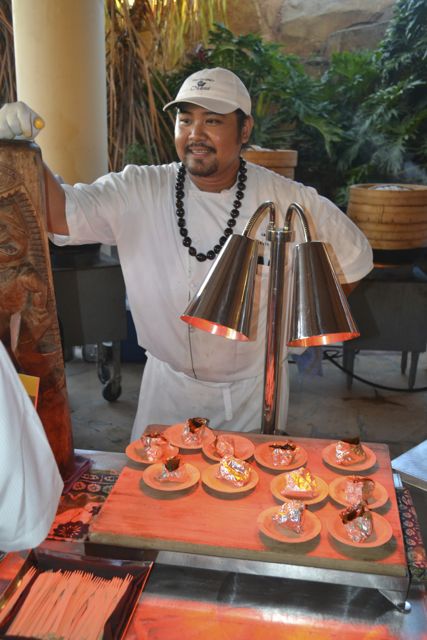 In this era, my favourite was the Coco Crusted Lobster Sushi that sounds basic, but it’s quite hard to make.  Sushi rolled with Mango, Lobster and Avocado, crusted with Toasted Coconut Flakes and laced with Dragon Tare, it’s flash fried for an amazing dish by Bernardo Salazar of Royal Lahaina Resort. 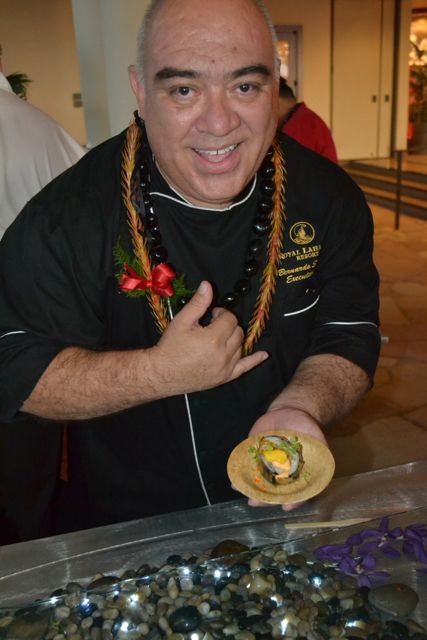 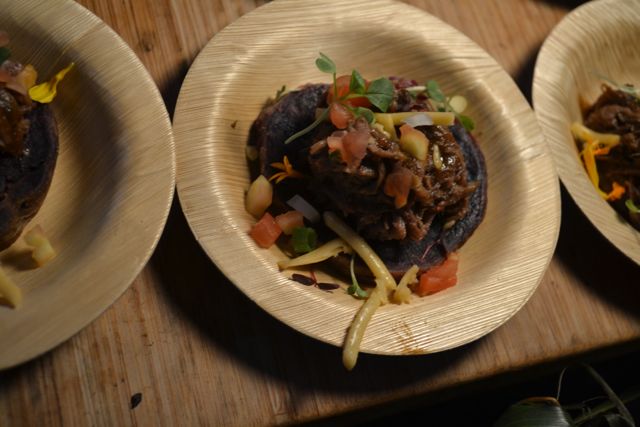 The cones are Maui Gold Pineapple Mousse with Passion Fruit caviar wrapped in dark chocolate by Ikaika Manuku of The Westin. 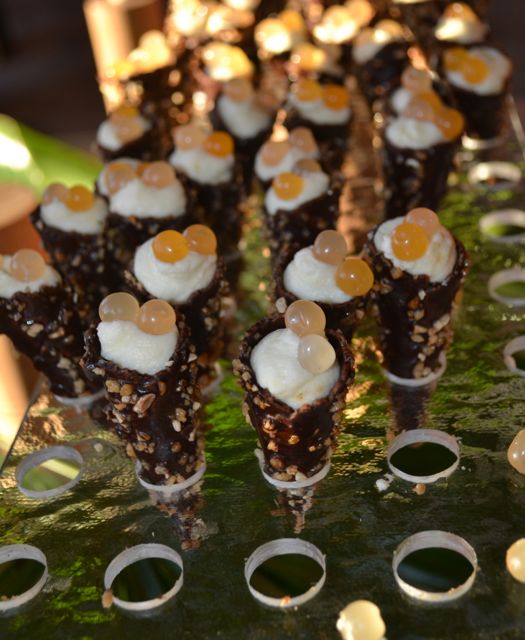 The finale was the Sheraton’s Sweet Potato Cheesecake with Orange-Ginger Caramel Sauce.  Alongside that are shooters of pineapple juice with lemongrass and vanilla bean splits. 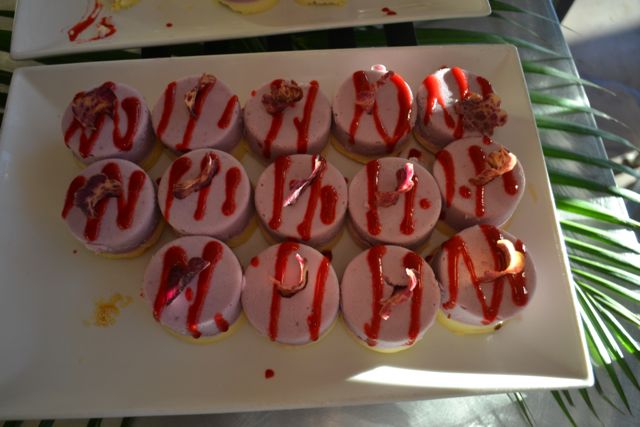 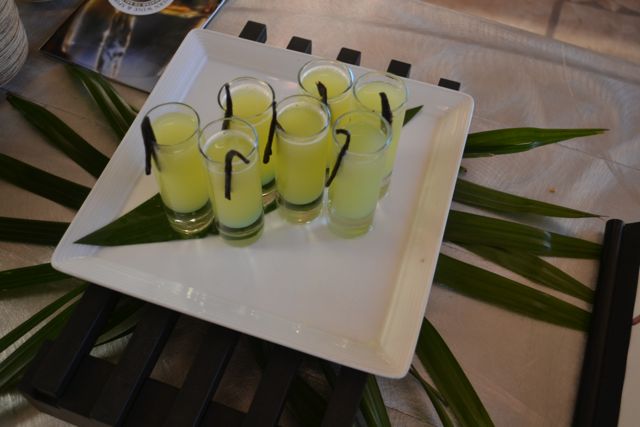 There were other dishes but it would be tastebud overkill to describe them all.  Rest assured that this event is a must for culinary tourists and still has two nights to go including the Hawai’I Food and Wine Festival’s Sunday night Stadium Duel. 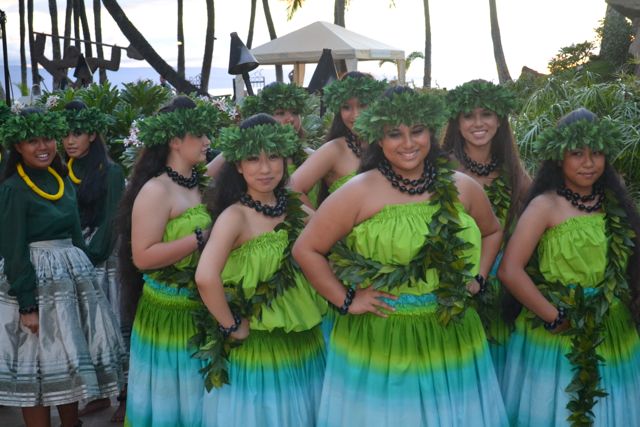 All through this feast were hula halaus from young girls to young women to an older kumu hula teacher dancing solo.  The band was a crew of local heroes who come together at various venues to back the hula troupes as they sway into the sunset. 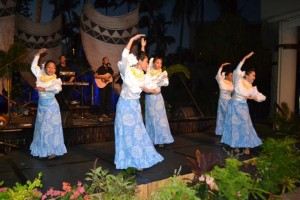 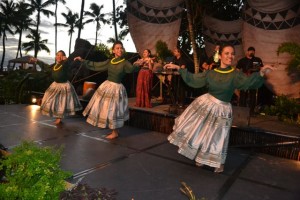 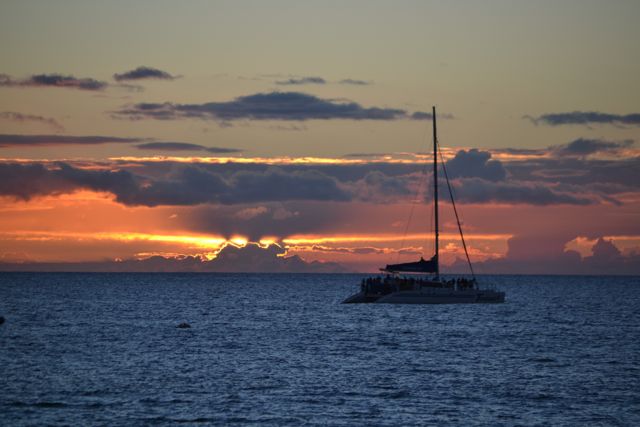 Posted on 30 August 2014 by Phil in Uncategorized