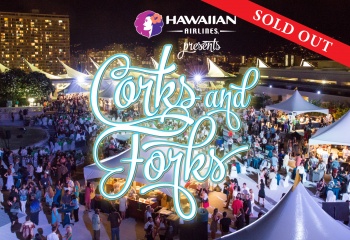 The days of rock stars are not yet over but their business model truly sucks with few newer acts likely to reach the longevity of their predecessors.  Today, celebrity chefs are the new superstars and I was lucky to hang out with and taste their special tunes, each having careers that have spanned over 20-40 years each. 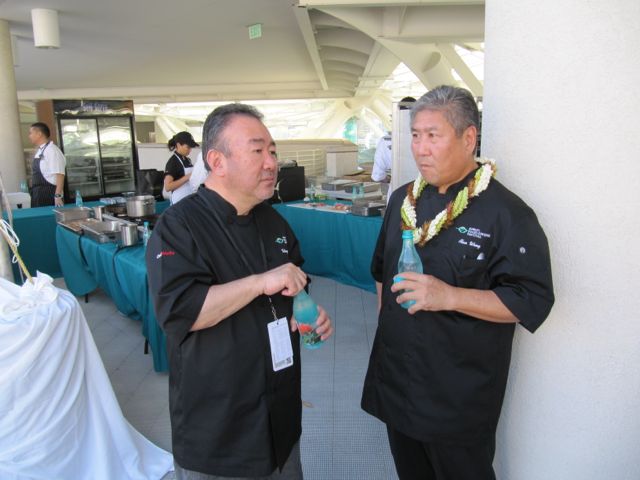 They don’t dress in wild garments as you can see from the somber pic of Tetsuya and Alan though they do wear lanyards when they are offstage.  As a matter of fact, they all wear the same black or white jacket and pant ensembles, perhaps broken by a striped apron.  They don’t swig from Jack or Stoli bottles either, preferring the 16oz designer water option.

At one point I was getting a hug from Tetsuya (who I hadn’t seen since last year’s event) next to Alan Wong who asked where his hug was (jokingly) as Nobu Matsuhari walked over to shake hands and Dallas’ Dean Fearing hopped in to drawl a howthehellareya as he pressed flesh on his night off cursing the chef stands. 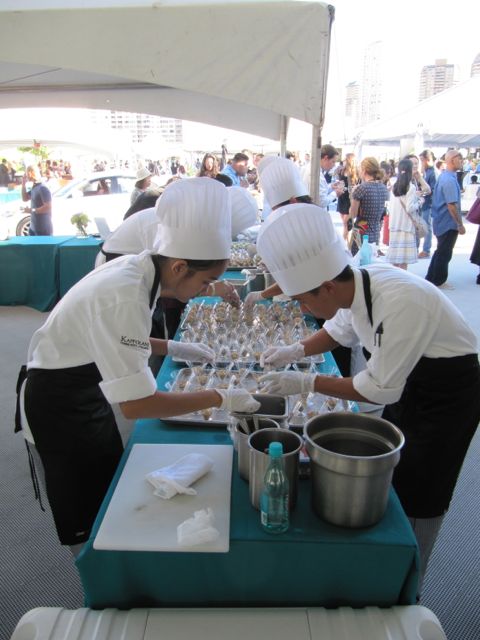 That would compare to having Dr John and Aaron Nevile congregating over a joint and being joined by Willie Nelson and Delbert McLinton discussing a new guitar model.  But instead of music coming out, it was flavours and scents.  Their bands are their sous and assistant chefs, their roadies the backline crew. All for a concert of cuisine that the punters pay $200 while the VIPs get a shawbag and special tables in their $500 ducats. 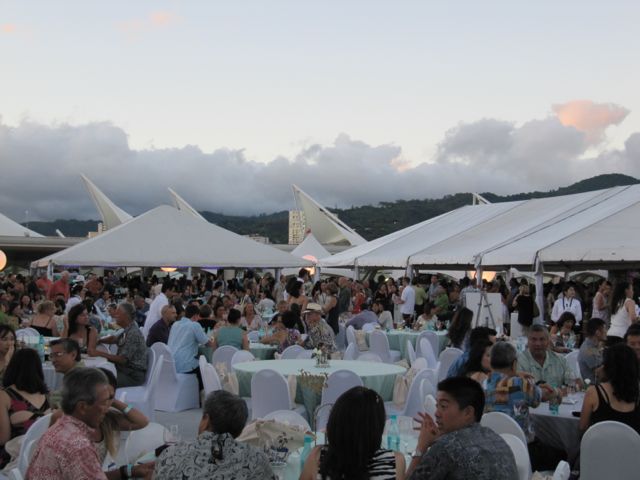 It’s kinda like being able to meet the rock and soul stars of the good ol’ days backstage in the 70s when legends were approachable and humble despite their emerging or established fame.  Night three of the Hawaii Food and Wine Festival was an array of 19 chefs from here and abroad, 17 winemakers showing off their wares on barrel tops in a long two-per-side tent and islands of seven mixologist stations where wild cocktails were being disseminated. 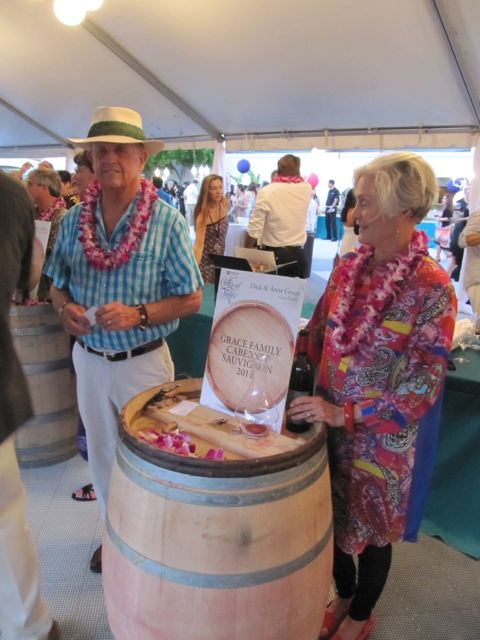 But first a long elegant cabernet sauvignon from one of the top 20 Napa producers who were sampling their wares.  I decided to save Opus 1 for later and start with the Grace Family.  You couldn’t ask for two more contrasting dressers but their wines are stupendous. But back to the cutting board action. 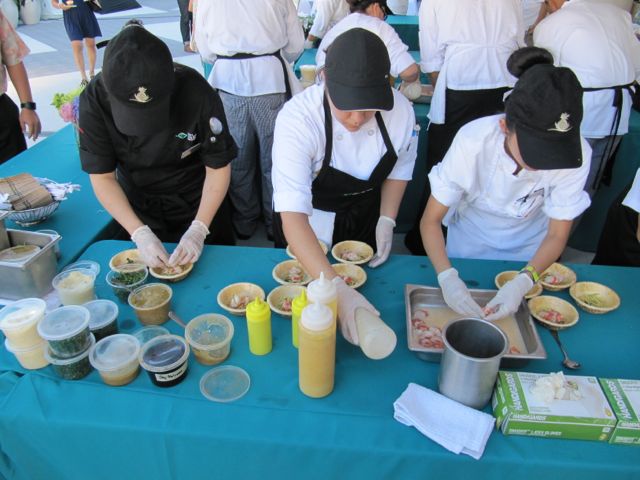 The quiet master, Tetsuya featured Ceviche of Kona Spanner Crab with Buckwheat and Soyuzu.  It was light, cool, crunchy with just the right tartness and crabbiness.  It was like cocaine, all you wanted after one dish was another of the same.  Habituating as Tets’s creations always are. 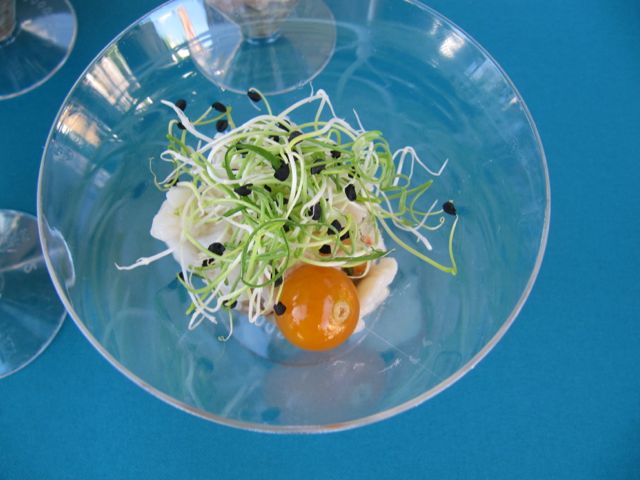 Only a couple of steps to Ala Wong’s tent with his crew in full swing and you’re groaning with his Big Island Keahole Lobster with Miso Garlic Black Pepper Broth that was a killer dish with spice of the pepper and the front of garlic as well as the base of miso.  It made me make a mental note that I have to secure a reservation for his restaurant on King Street the night before I leave. 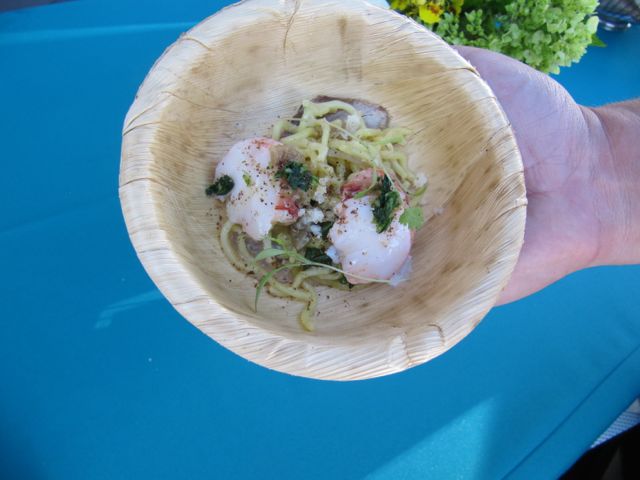 Nobu is a Japanese chef diety and here he created a Hi Style Ceviche with Ahi and Crustaceans but no ingredients listed.  Some sacred dishes are best left mysteries.  His restaurant in Waikiki opposite the Halekulani is one of the culinary temples i worship at each trip over. 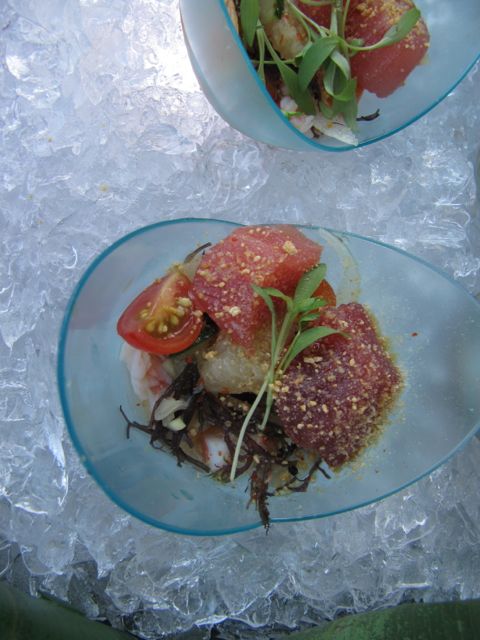 Once you got past the trifecta of Tetsuya, Alan Wong and Nobu’s stands lined up together, you hit the real local style food of Kings Hawaiian Bread where an Opah BLT was constructed from Hilo Crispy Pork Belly, butter leaf lettuce, tomato, yuzu aioli and a couple of secret species on their bun.  I didn’t dare, needing to keep room for other dishes.  Maybe last call tonight! 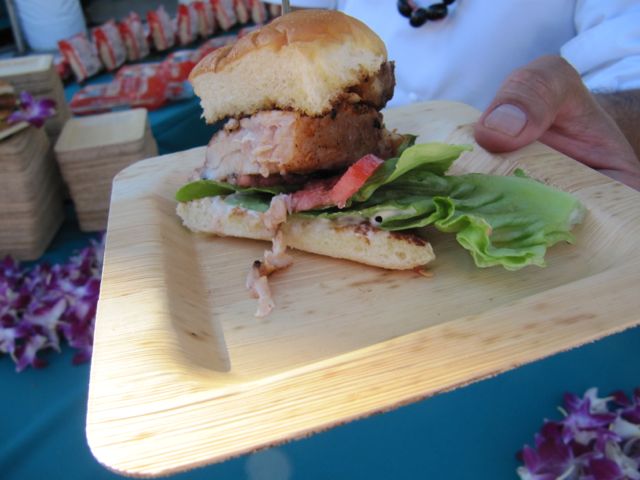 Grant McPherson of Las Vegas’ Jade Range and Scotch Myst had a history in Australia in the late 80s and maybe that’s why he featured a Kahua Ranch Lamb Burger with Pickled Red Beet, Big Island Goat Cheese and Sweeat & Sour Shoot Crème Fraiche.  A Trans-Pacific Slider.  And he gave out the recipe!  Now that’s a sandwich!

Next to him was one of my top three favourite chefs of Oahu (along with Chef Mavro also cooking tonight and Alan’s partner in HFWF, Roy Yamaguchi).  Chai Chaowasaree of Chef Chai’s is also the Executive Chef for Hawaiian Airlines and a co-founder of Hawaii Island Chefs (HIC), the second generation of Hawaii Regional Cuisine Chefs of which he was one of the original 12 who turned around Hawaii’s food culture.  He also has an amazing backstory of being confined for immigration woes and being sprung by his chef mates before deportation.  Such a sweet, funny and incredible man, he’s a delight to dine with away from this event so he’s a Saturday night delight before I go. 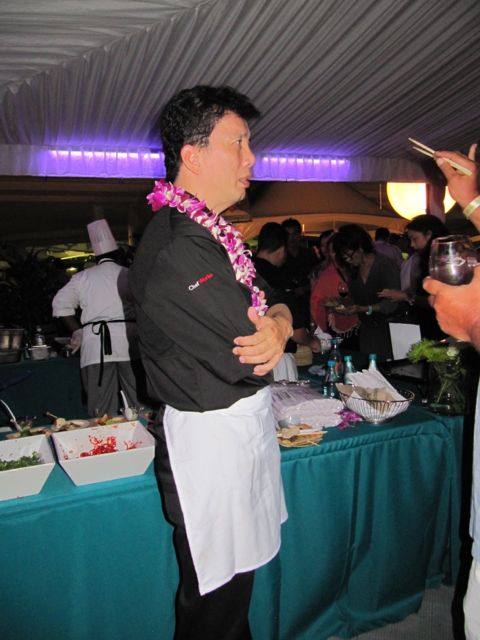 His dish was Baked Stuffed Cherrystone Clams with Kona Lobster, Fresh Kauai Prawns, Scallops and Crab Meat.  About as much crustaceans as you could pack into one dish and oh so flavourful. A true master. 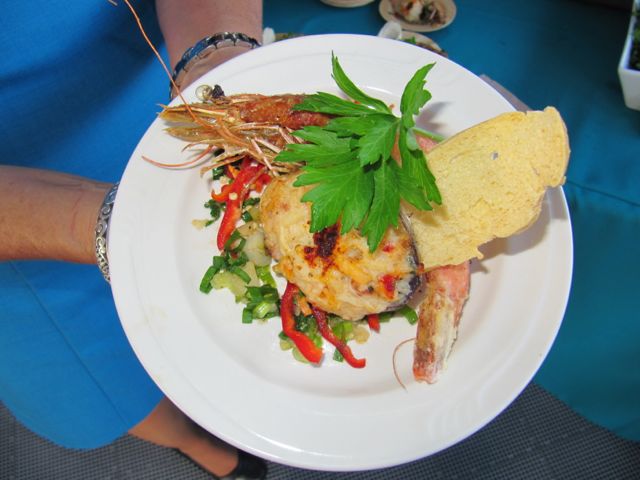 At this point I got collared by the staff of tonight’s sponsor Hawaiian Airlines, dressed as pilots and stewardesses in the old style and urging me to have my picture taken and Instagrammed in a fake hat or other promo gear which I had to pass on.  I love Hawaiian Airlines especially with its generous 64 kilo per passenger free baggage limit which allows me to haul back at least 20 pounds of Kona and Maui coffee each trip plus lashings of spices and goodies.  And with Chef Chai’s menu, it’s actually a great meal time to lok forward to compared to the offerings on Death Star Airlines and CountAss—the other Australian carriers to HI. 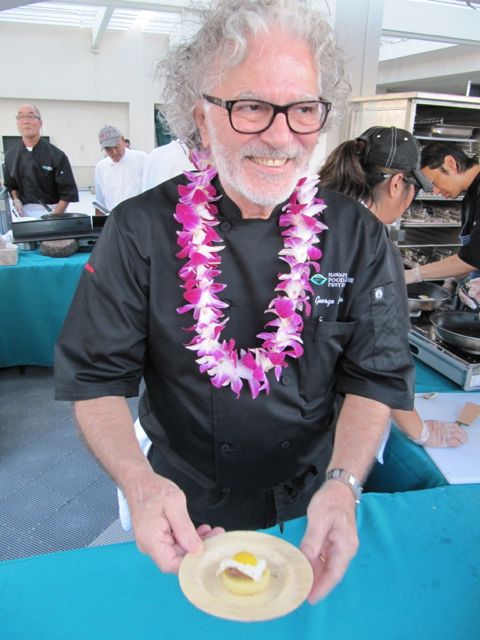 Back to food on the ground though.  Speaking of Chef Mavro (like Chai, his name is equally long Mavrothalassitis so he’s shorthand it), he had a magnificent yet simple dish of Potato Mochi  with Oxtail Rillettes, Quail Eggs Flavoured with Long Peppercorns.  The little spongy pad of mochi (kinda like a pancake) absorbed the rillete juices and the baby egg was perfectly cooked yet runny.  A masterpiece from Mavro. 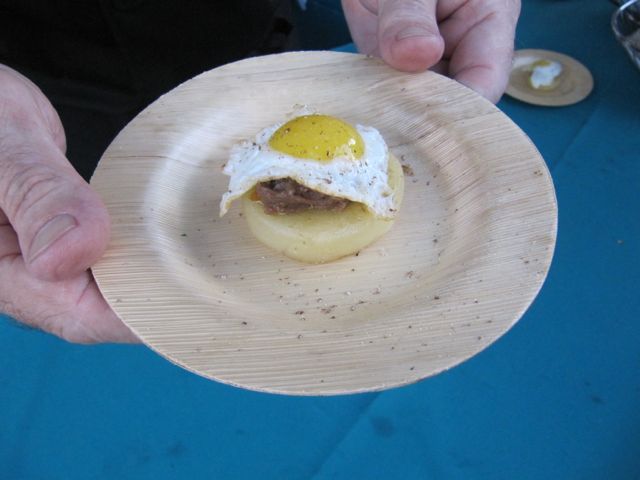 Another of my perennials faves, Celestine Drago from LA, loves to come out to Hawaii and is always a special feature at HFWF.  His simple dish was Spaghetti with Kauai Shrimp and Kaffir Lime but it was complex in taste that made you savour and chew slowly feeling the textures as well as the fight between flavours. 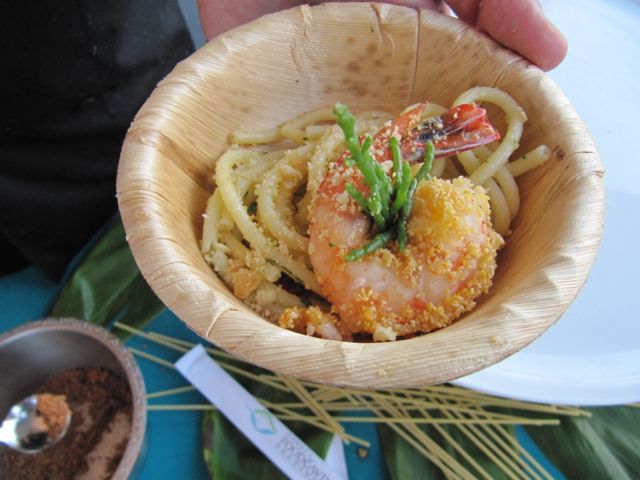 Another dash into the wine tent again and this time it was to head towards Caymus whose white wine Conundrum using 11 different grapeswas discovered here by myself and Lisa at Chef Chai’s.  But this time it was to taste their 2009 Cabernet Sauvignon which was mind-shifting in its elegance.  The company also produces one of my favourite Pinot Noirs, Meomi, which I regularly quaff on  the road here. 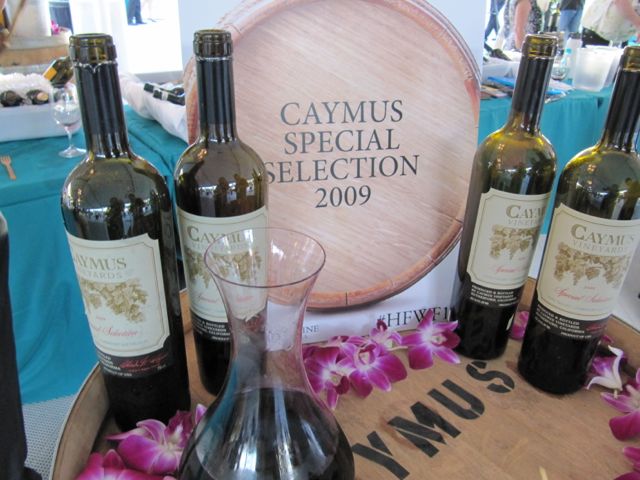 After that mouth filler, a trip to Ed Kenny’s stand where a small thin slice of Air Dried Kulana Ribe Eye was served with Naked Cow Dairy’s Tomme and Pickled Pohole Fern.  His restaurant Town is a regular lunch stop on my way around and it’s de rigeur. 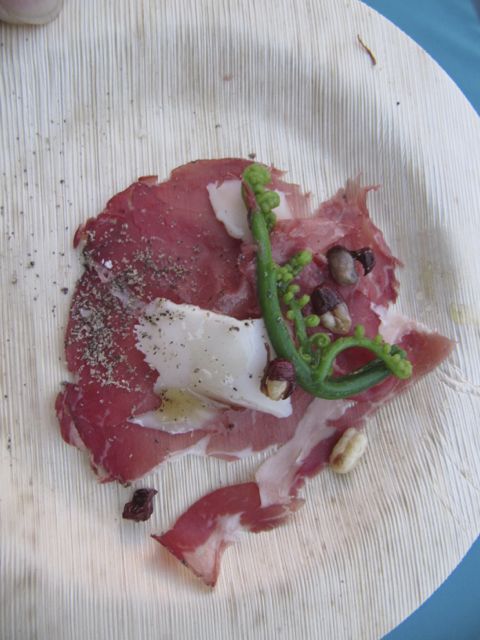 No more wine can touch my lips because I do have to drive, however I decided on small portions of cocktails from local and mainland mixologists which are pictured below before the final course. 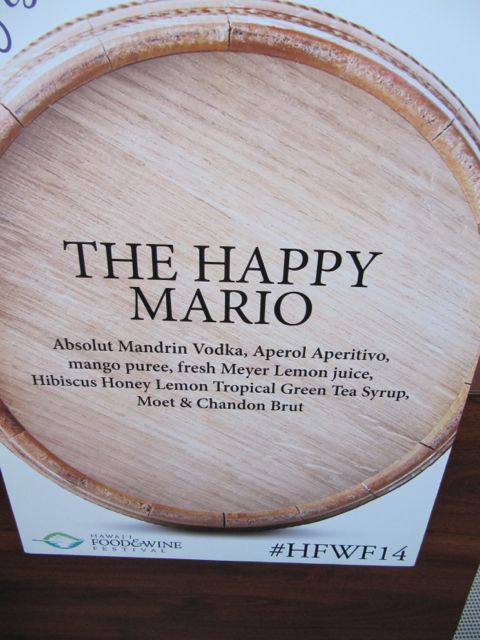 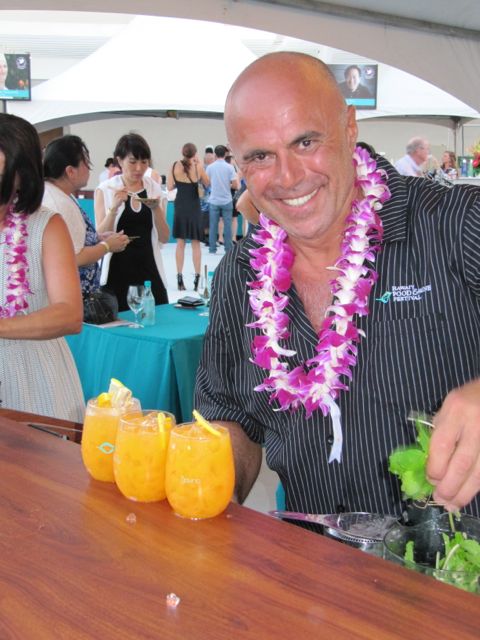 And a happy little sizzler it was. 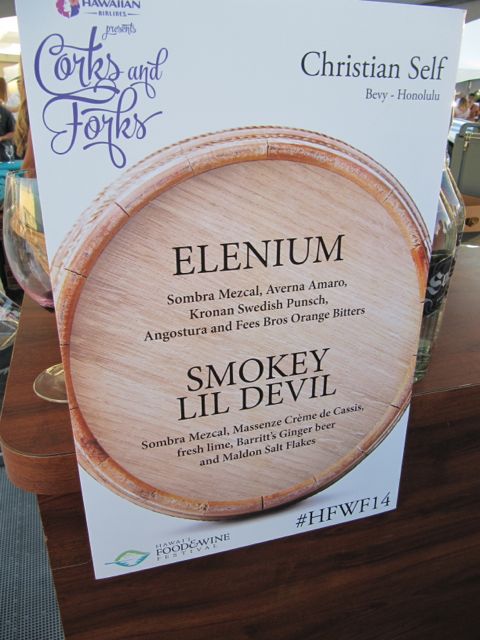 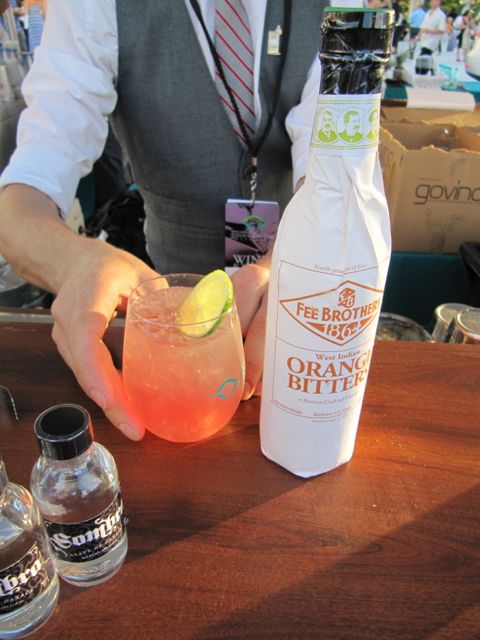 Elenium was also an orange delight with a mahogany twist from Bevy’s Chris Self. 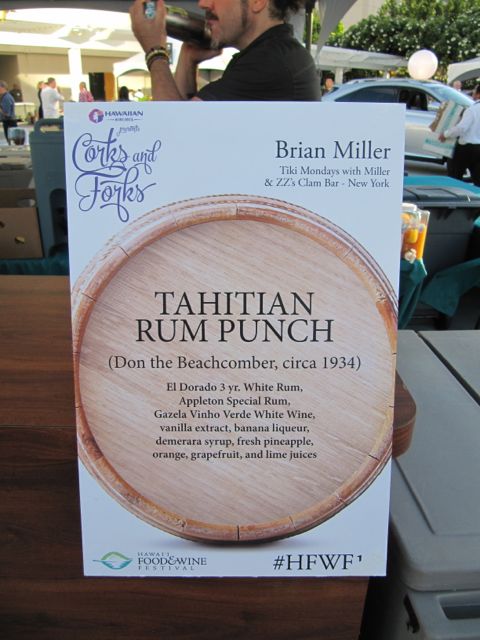 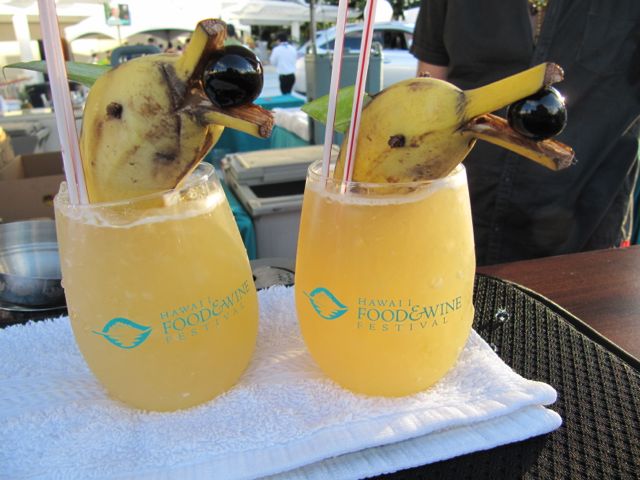 Like a pair of dolphins just dyin’ ta meet’cha.  And a great drink it was.

Tine for the final liquid refreshment of the night.  Drip poured Hawaiian Coffee Company own farm Kona Coffee.  When I need a jump start at Ala Moana Mall, Rowe here is the Go-To Guy for me. 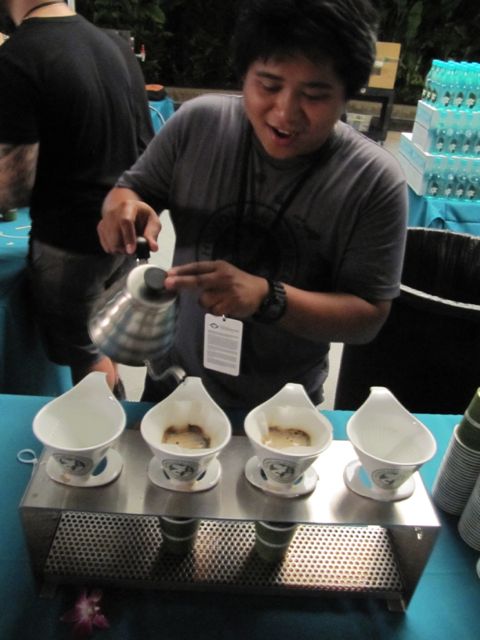 So it’s only one more sleep before the finale on the beach at Ko’olina at the other side of Oahu.  I’ll have to curb my tastes for Sunday.  This has been an exceptional event.