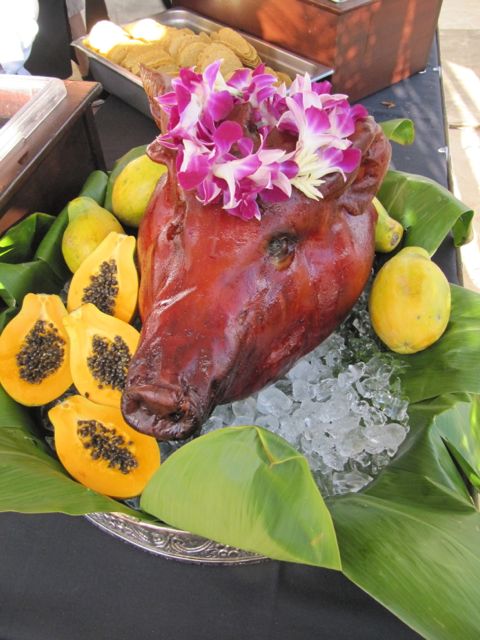 The final night of the 4th Hawaii Food and Wine Festival brought to a close my marathon feeding frenzy across the Islands.  Held on a beach in West Oahu at sunset with feet in the sand, surf lapping the shore and stars bursting out, it’s an idyllic venue with the exception of having to walk across shifting sand. 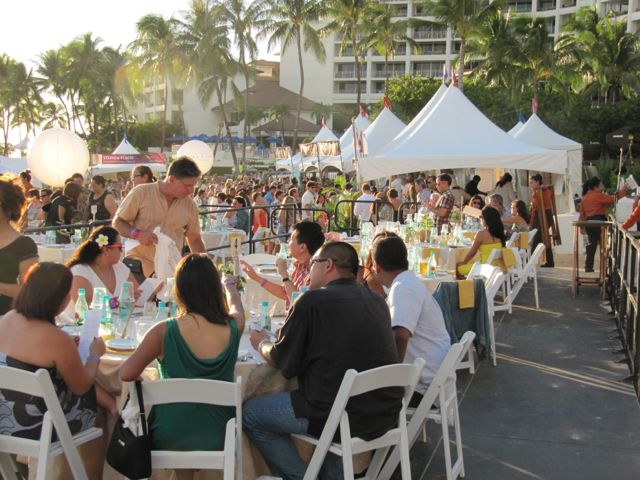 There are few fine dine options in Coffs Harbour and I made up for it here, though will be back home in a week undergoing an intensive campaign to slim down. 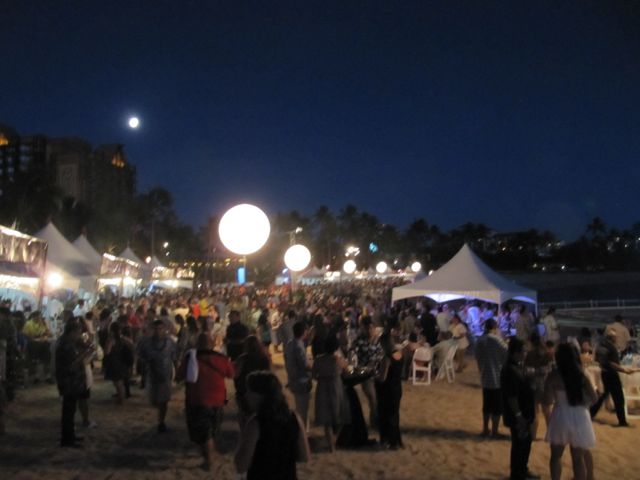 It’s not been like ‘Man vs Food’ on the Food Network where the challenge is to eat the biggest portions and win a contest.  It’s more like having small samples and savouring with a range of them from top chefs—80 total in HFWF across three islands—as well as sampling wines from 40 vignerons.  Still, it’s exhausting. 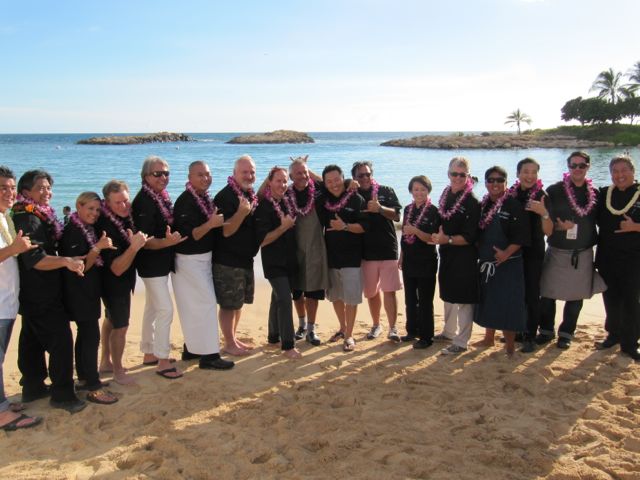 Yet it is also a voyage of discovery.  I had some incredible cocktails made from vegetables rather than fruits and sweets.  Chandra Lucariello, a superstar mixologist I look forward to drinking from each year, came up with Garden Variety featuring Maui’s own Organic Ocean Vodka, Suze Gentiane Liquer, Strawberry Puree, Fresh Tomato Water and Yuzu with a kiss of Balsamic Glaze.  More like a salad. 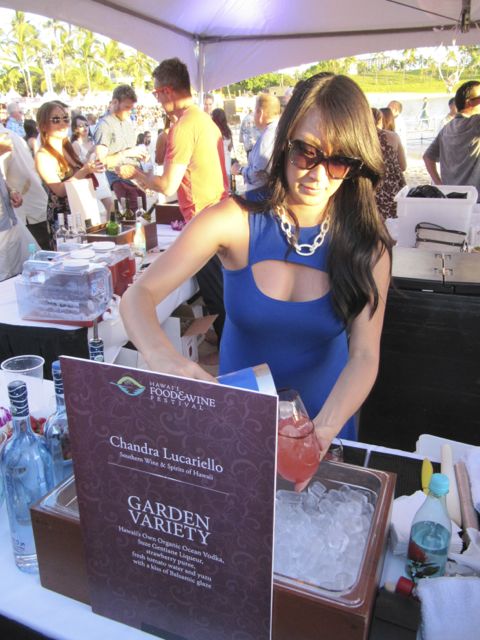 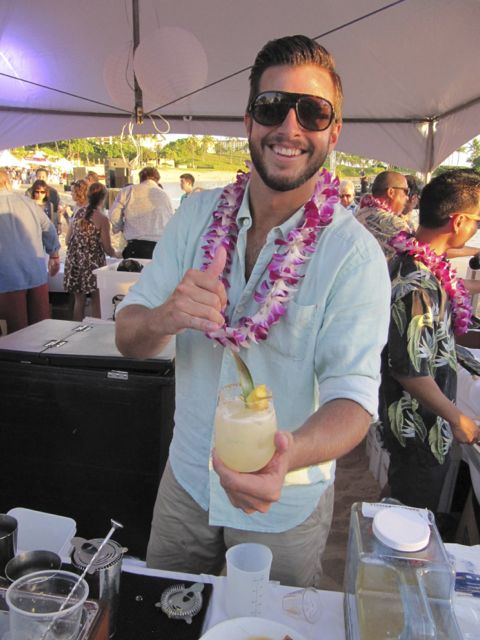 And some of the wines I tried out will spur orders when I get back to Australia like the Molly Dooker shirazes I’ve already lined up from trying here.

Sure we all grabbed a glass from the Opus One stand but the two that I treasured were Grace Family Vineyards and Morlet Family Vineyards which gave me a great appreciation of Cabernet Sauvignon over the Pinot Noirs I’ve tended to consume as vin of choice. 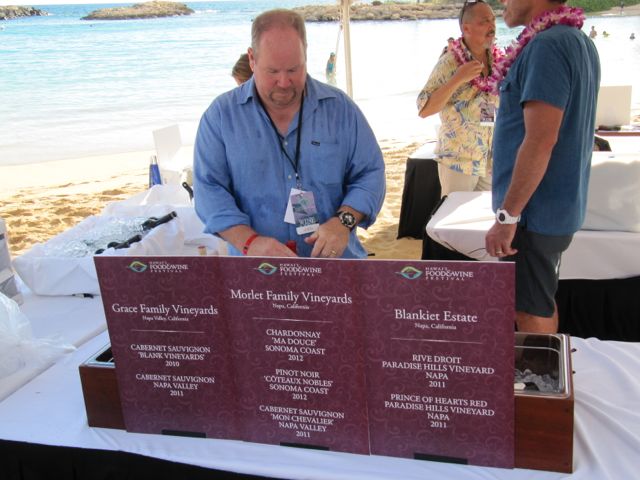 Also on hand at the beachside venue of Ko’Olina resort was a sake stand which featured some fantastic variants of the genre.   It’s hard to find great sake in Australia but it’s ubiquitous here. 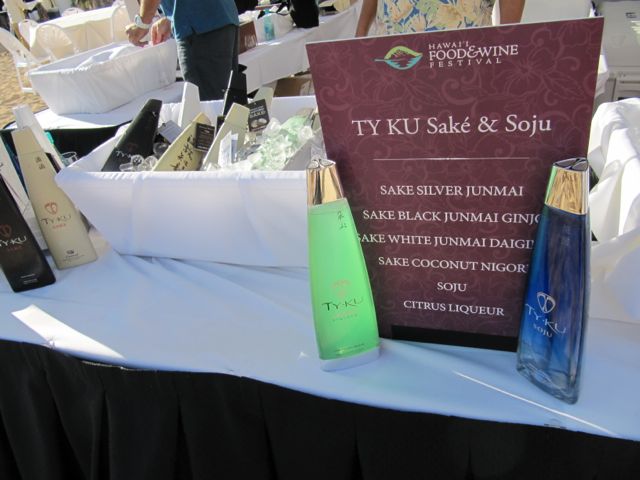 Cat Cora of Iron Chef’s Kauai Shrimp with Basque Rub and Chimichurri was a spicy hit and the hit of the night with the queue for this celebrity chef down 30 meters almost to the water.  Service as slowed by constant autograph and pic requests 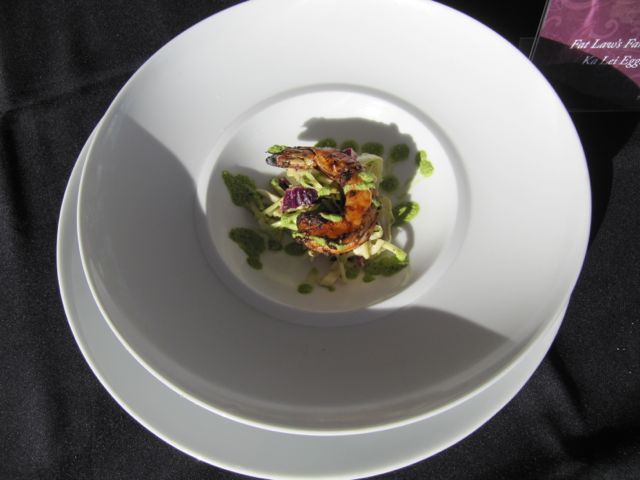 My fave Texas chef Dean Fearing rained tacos on the crowd with his typical laconic style.  His prize was a Barbecue Pork Street Taco with Smokey Tomatillo and Avocado Salsa.  Took me back to Dallas. 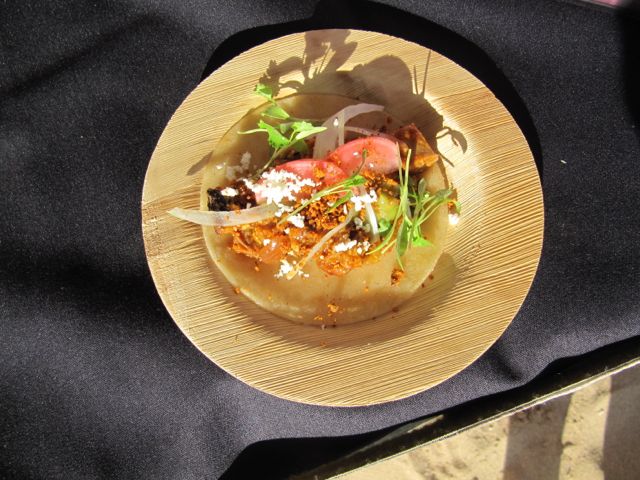 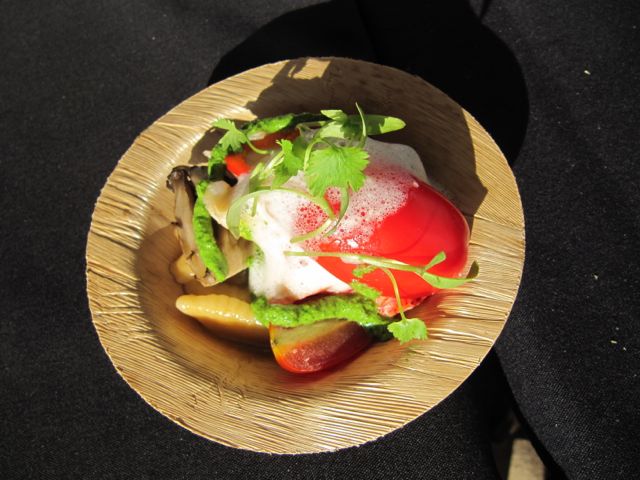 A real surprise from the private Hawaiian Airlines staff kitchen of Lunchbox at the Airport.  Mark ‘Gooch’ Naguchi fixed up a plate of Molokai Venison with pa’i’ai, Namihana shochu and Palula.  Scooped up in the leaf it was tender and juicy and very Japanese. 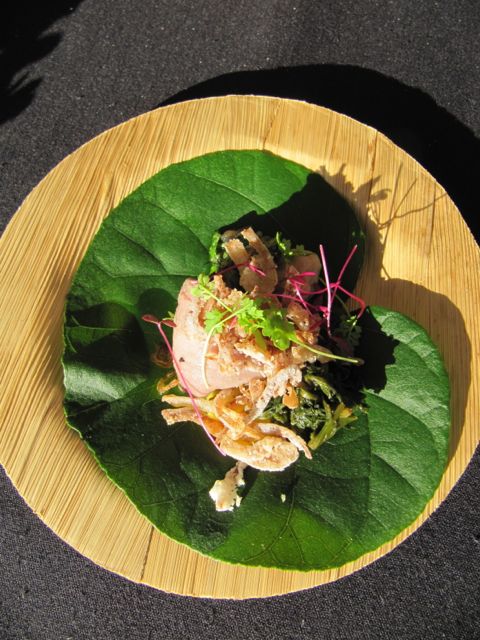 I asked what pa’i’ai is and was referred to the poi pounder in front of the stand who smashes taro root to a rough consistency rather than puddly making it kinda like hommous.  The girls loved it with one offering to dry his sweat with her towel. 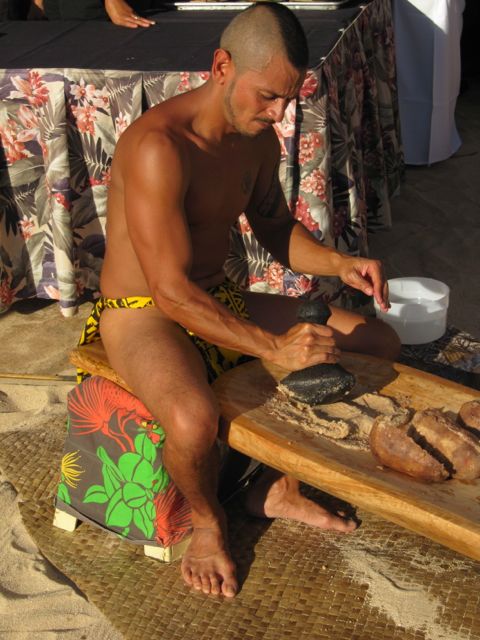 More tacos!  This one from Andrew Sutton of Napa Rose in Anaheim California which was Island Kalua Pig shredded with pickled pineapple and an avocado and coconut milk shake. 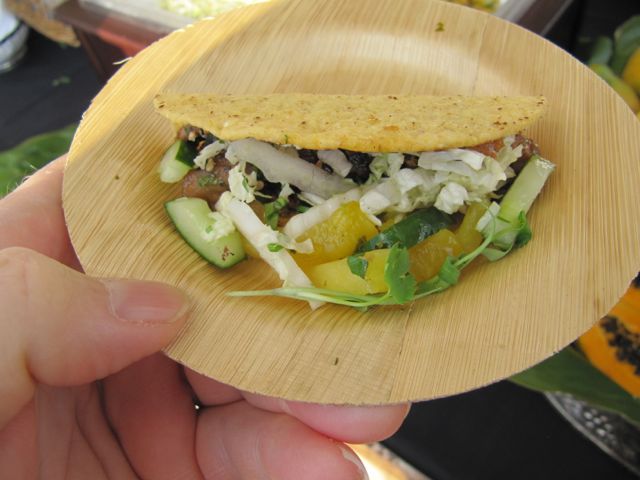 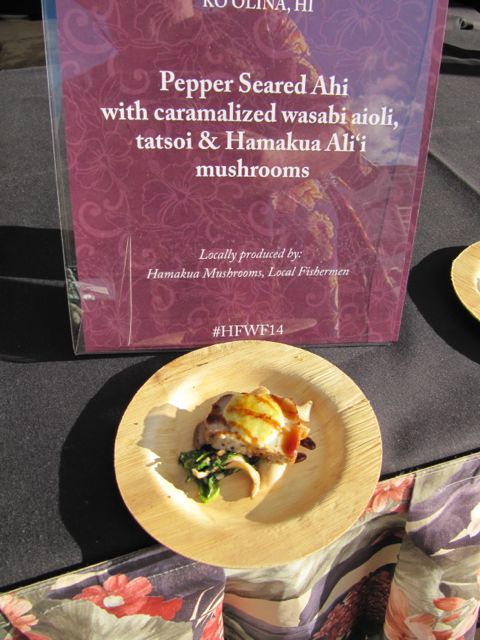 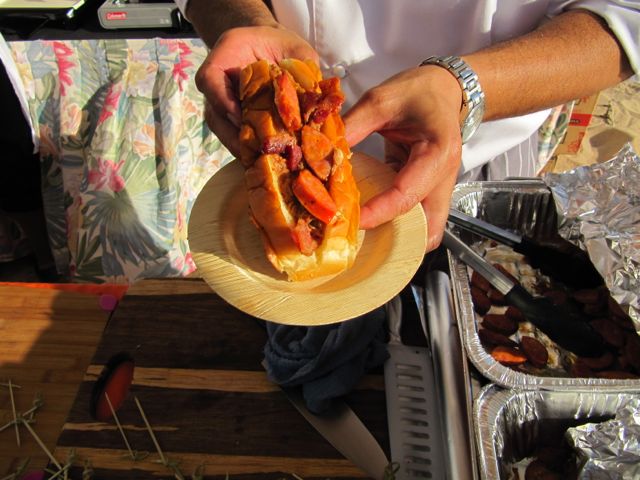 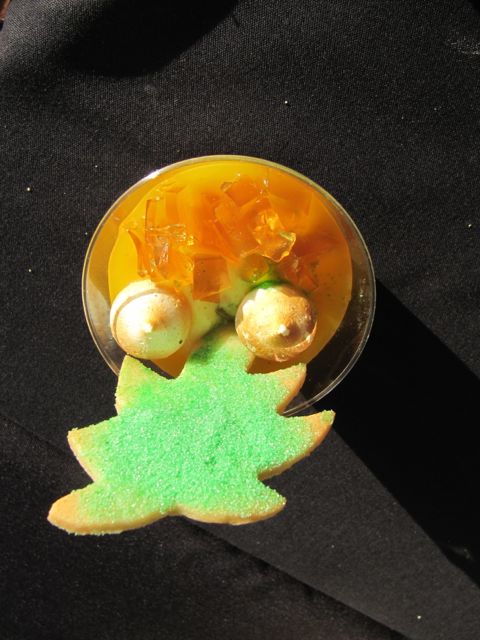 Sang Yoon of Lukshon in Los Angeles offered a Kona Lobster Roll with Pig’s Ear Bahn Mi Roll asking what I’d do in return.  “Make you famous?” I answered.  To which he responded, “I already am.”  My reply.  “Well sorry then, I can’t make you humble.” As his expression soured, I pointed to his sign and said, “By the way, you’ve misspelled Banh Mi as Bahn Mi.” 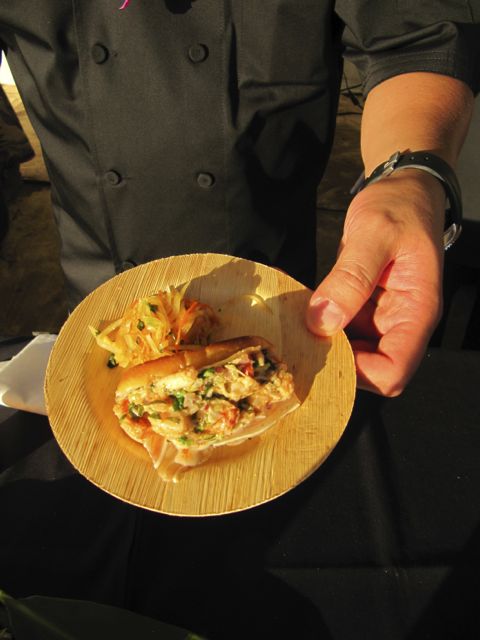 Talent and humility lived next door as Josiah Citrin of Melisse in Santa Monica had a tasty combo of Cured and Sliced Hawaiian Fish Crudo with Mango Milk, Fermented Hearts of Palm, Avocado and French Sorrel.  Now that’s a chef and an immensely subtle plate. 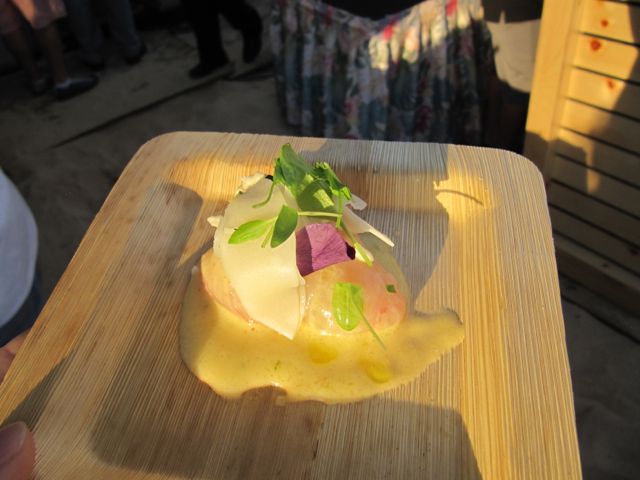 Last call of the night for me was the excellent and humble Art Smith of Table Fifty Two in Chicago, here on his first trip.  His sideline is working with trafficked people and I spent a half hour chatting with this wonderful man.  His dish was Big Eye Ceviche with Yuzu Shrimp, Thai Basil, Hearts of Palm, Corn Shoots and Sweet Potato Chips. 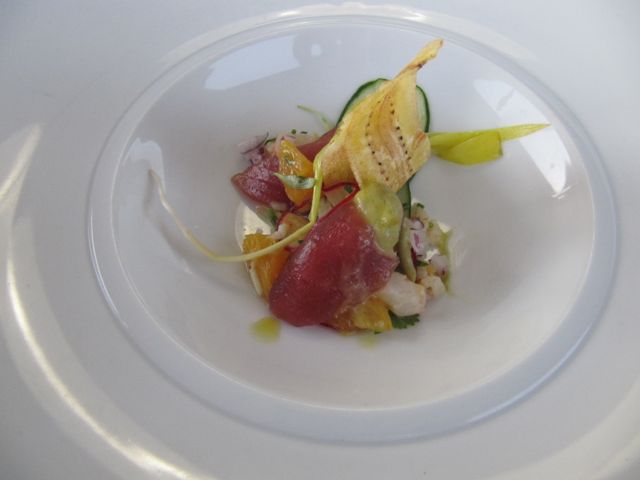 If you’re thinking of going to my favourite event in my favourite destination (hopefully on my fave airline Hawaiian), mark your calendars for September 4-13 that are the projected dates.  I’d suggest arriving September 1 if flying direct and maybe stay North Shore for a coupla days before hitting the first events that will probably be on other islands followed by Honolulu. 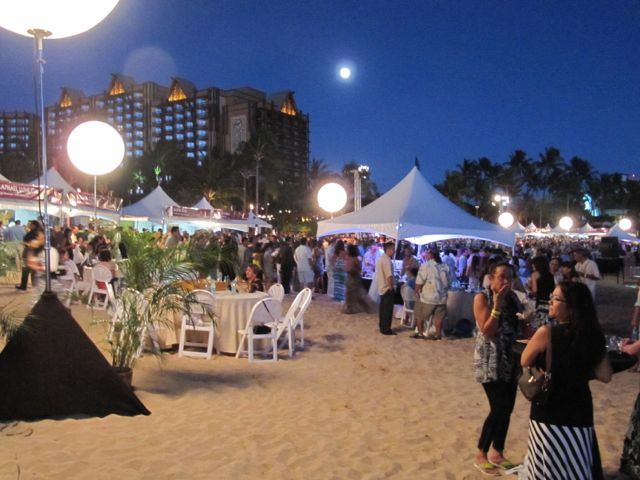