Like Amy and Dan who had migrated from Alaska and the Northwest US to escape the cold and establish Ho’oilo House, I was fleeing winter in Australia for Maui.   Ho’olio in Hawaiian for winter and this spacious six suite retreat, high in the West Maui mountains, is the perfect escape from it.   Only a few miles from the former whaling port and now tourist mecca Lahaina and a couple of more clicks from the hotel corridor of Ka’anipali, it has what they don’t; near silence, birds tweeting, soft breezes, the light scraping of palm trees, the occasional thud of a coconut and vast views across the channel to the island of Lanai from on high. 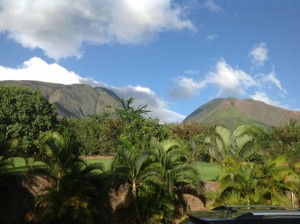 Up to the point I got here, it had been a series of rushes through Honolulu for two days, Vegas for a week, driving the Big Island for another week and a plane mixup on the way to Maui.  From the moment I hit the front doors of the Balinese inspired main house area, I decompressed.  The wind from the West Maui Mountains gently nudged me through the doors as if by magic and I opened the double doors to my well-laid out rooms with a huge soaking tub, bamboo pipe outdoor shower and elevated enclosed day bed. 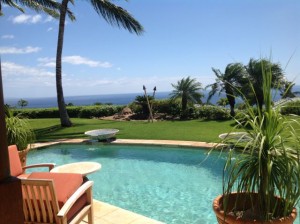 But first, I needed to submerge my overheated head in the pool and let the cool flow of water from the poolside fountains wash over me.   I laid back and floated while my mind wandered away.   My body evaporated in the waters like a massive sugar doll and I was totally at peace. 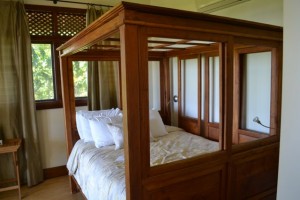 Nap time called,  There is such sweet luxury in unfolding yourself on top of a day bed and drifting off to sleep for an hour or so.   Your body know exactly when to awake you and I had vivid dreams of all things, sailing on the Coon Family’s Trilogy boat to Lanai which I’d done so many times before. 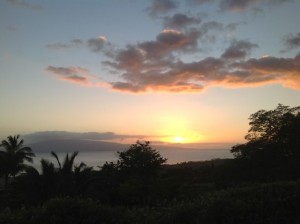 Sure I’ve had some great meals; MALA, Honu and Star Noodle in Lahaina and a not so great one at Aloha Mixed Plate, and yes, some cocktails were consumed from Pina Coladas and Strawberry Daiquiris to Mojitos and a simple Hawaiian Punch.  But the best part was the abyss of perfect sleep at night with cool trade wind breezes brushing my head and dawn colouring the skies before an active day began.    I am so looking forward to tomorrow, as I do every day–here and back in Coffs Harbour,

Oh and those sunsets!